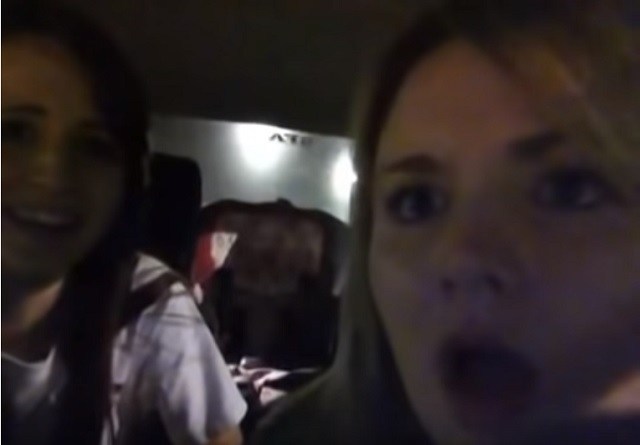 Seen in this video, appears to be something quite unusual traveling along with two sisters singing together in the car together, by music artist Adele. At first, many thought this was a ghost of some sort, yet it is another example of a glitch in the matrix.

These occurrences tend to happen from time to time, this has led people to believe we are all living in some kind of virtual simulation. It is really weird to think, all of us may not even exist beyond what we have been told.

While the possibility of this being something else is likely, different theories have led to some to think this is nothing more than lighting playing tricks upon one’s eyes. The low pix elation camera used, has created a number of shadows around inside of the car. It is unknown exactly when this video was made, but it was posted back on Mar 7, 2012 on YouTube.

Is this merely a glitch from the camera or did something happen to cause a baby on board to appear in their backseat? The look on their faces says it all. They seemed genuinely surprised and a bit freaked out over it.

In the description of the video Mark Byers posted, “My daughters driving around, singing, and channeling a ghost baby. Keep your eye on the car seat. Optical illusion? Apparition? I don’t know.”

The “baby” seen appears around 33 seconds into the video. Both of these sisters had no idea their day would be very different after this. So far, the video has been seen nearly 27,000 times. Some people are not seeing anything…but a baby-like face can be seen if you look carefully.

This baby seems to have a facial expression with its mouth open. If this is some sort of ghost, did it die around the area where these girls were driving? If the car was used, some think that the baby may have died inside the car and is now haunting it.

There isn’t any information about where the girls were during this recording. It could be anywhere but the video is obviously taken at night. Both sisters are smiling during certain moments. At the end of the video, the sister wearing a green shirt driving appears to laugh. Is this laugh from being scared or from an attempted prank? One can only ponder.