THE SUPERMASSIVE black hole at the centre of the Milky Way exploded 3.5million years ago, according to astronomers.

This is considered to be ‘astonishingly recent’ in galactic terms and is changing what scientists thought they knew about our galaxy.

Professor Lisa Kewley, who worked on the study, said: “This is a dramatic event that happened a few million years ago in the Milky Way’s history.

“A massive blast of energy and radiation came right out of the galactic centre and into the surrounding material.

“This shows that the centre of the Milky Way is a much more dynamic place than we had previously thought. It is lucky we’re not residing there!”

The cataclysmic blast ripped through our galaxy and was likely felt 200,00 light years away in the Magellanic Stream.

It is considered to be a recent event because when it happened the dinosaurs had already been wiped out for 63million years and human ancestors were already walking on Earth.

This black hole blast phenomenon is known as a Seyfert flare.

The astronomers think it would have created two enormous ‘ionisation cones’ that would have sliced through the Milky Way.

They think it was caused by nuclear activity in the gigantic black hole, known as Sagittarius A.

It is estimated to have lasted for around 300,000 years, which is extremely short in galactic terms.

Co-author Magda Guglielmo from the University of Sydney said: “These results dramatically change our understanding of the Milky Way.

“We always thought about our Galaxy as an inactive galaxy, with a not so bright centre.

“These new results instead open the possibility of a complete reinterpretation of its evolution and nature.

“The flare event that occurred three million years ago was so powerful that it had consequences on the surrounding of our Galaxy.

“We are the witness to the awakening of the sleeping beauty.”

The research was led by by Professor Joss Bland-Hawthorn from Australia’s ARC Centre of Excellence for All Sky Astrophysics in 3 Dimensions (ASTRO 3D).

During the study, data was gathered by the Hubble Space Telescope and used to calculate when and how the explosion took place.

It will soon be published in The Astrophysical Journal.

What is a black hole? The key facts

Here’s what you need to know…

What is a black hole?

What is an event horizon?

What is a singularity?

How are black holes created?

In this article:Black hole, event horizon 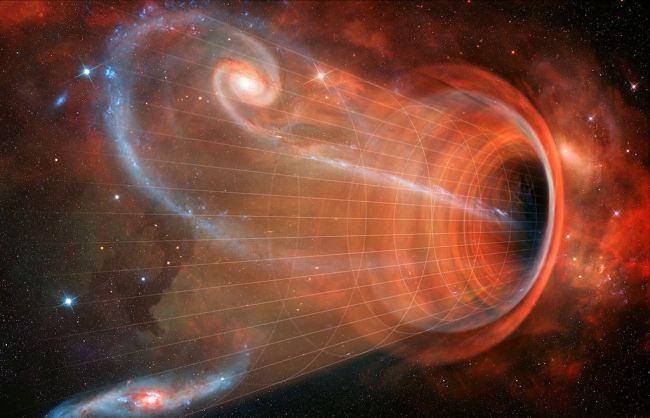 Where Do Black Holes Lead To?

So there you are, about to leap into a black hole. What could possibly await should — against all odds — you somehow survive?...