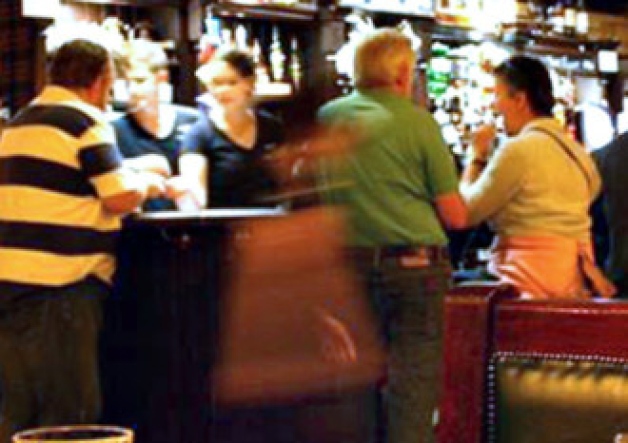 IT is believed to be Edinburgh’s most haunted pub, with more spooky spectres than there are spirits behind the bar.

Now staff at the Grassmarket’s White Hart Inn have what they believe is a photo of a troublemaking ghost, captured by a family of Australian  tourists.

It shows what staff claim is a ghostly female apparition near the venue’s main bar.

The spooky snap is believed to be a girl in a red dress who haunts the bar, a spectral hand visible at her side.

Such has been the  excitement over the image, a ghost-chasing film crew has asked to spend a night locked inside the pub in a bid to capture unmistakable proof of the afterlife on camera.

Inn manager Michael Johnson, a self-proclaimed sceptic, said the couple’s daughter took the holiday snap about eight weeks ago on a night out.

Mr Johnson said he remembers the night well as he had been giving the pleasant couple “jip about the rugby”.

He said: “They were about the second last group to leave and they pulled on my shirt and said ‘look at this’.

“They’d looked through the photos and seen something a bit strange. She pulled it up on us and that’s when I knew it wasn’t a hoax. She couldn’t have done any computer graphics because she was still in the pub.”

Mr Johnson said research carried out since the photo’s discovery had uncovered an unverified drawing of a prostitute dressed in red who is believed to have frequented the pub during the 1800s and been killed on the premises.

The White Hart Inn is central Edinburgh’s oldest pub, with the cellar dating back to 1516.

Poet Robert Burns is rumoured to have stayed there on his final visit to the Capital in 1791.

According to popular myth, Edinburgh’s notorious murdering duo William Burke and William Hare are supposed to have enticed several fellow drinkers away from the old pub to kill them at their nearby lodgings before selling the corpses.

Mr Johnson said of  unexplained happenings at the inn: “A girl claimed her hair got pulled while she was changing a barrel. We’ve had a chutney bottle thrown at one of the staff. Two of the girls were working one night and the music stopped. They went downstairs and all the wires had been pulled out.

“We had a guy that came and did an audit and he could hear barrels moving. We’ve also had complaints about people being downstairs counting money and they could hear people walking upstairs despite the pub being shut.”

Mr Connor said: “Because of where it’s come from with the elderly couple and them being blasé about it, it’s obviously not something that’s been done through Photoshop.

“The most striking thing about the picture is how vibrant it is.

“With the hand being there, we’ve enlarged that and we can’t see any manipulation.”