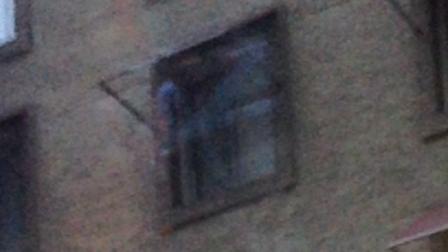 DOWNTOWN LOS ANGELES (KABC) — The Cecil Hotel was once a part-time home to serial killer “The Night Stalker” and murder victim “The Black Dahlia,” but it may now be home to a haunting new visitor.

An Eyewitness News viewer claims to have captured a ghostly image outside of the famous downtown Los Angeles hotel.

Koston Alderete, a Riverside boy with a love of scary films and ghost stories, took the picture, which shows a ghostly figure outside a fourth floor window. He says it looks a little too real.

“When I looked at that window, it just looked kind of creepy to me, and then I showed my friend, and he kind of freaked out. It just creeps me out still,” said Alderete.

Alderete says his ghost photo has already cost him some sleep and caused him to have a nightmare.

The Cecil Hotel has had its share of suicides and bizarre deaths, including the death of a missing tourist whose body was found in a water tank on the roof of the hotel last year.

Advertisement. Scroll to continue reading.
In this article:Cecil Hotel, ghost, The Night Stalker