A ‘ghost’ has been captured on CCTV in a 400-year-old Czech castle that was once used as a Nazi concentration camp.It has been blamed for the mysterious disappearance of objects from a closed exhibition, as the building is now used as a museum for local history.

In this video, a shadowy figure appears to move in front of the camera when all rooms were locked and closed.

It is also reported that no cleaners were in the room at the time.

The 17th century castle in the Czech town of Ostrov was captured by the Nazis in 1939 and turned into a concentration camp for Czech resistance fighters and opponents to the regime. CCTV footage was reviewed after objects allegedly started to vanish, and the strange figure was seen on the 12th and 14th of last month.

The story was published in local media after the matter was reported to police.

The camera is in the exhibition room where treasures belonging to the former castle owners – the Schlick family – are stocked.

Franz Joseph Heinrich Graf Schlik zu Bassano und Weisskirchen was born in 1789 in Prague and was the former owner of the castle.

His family was a Czech-German noble family and his father Count Joseph Heinrich Schlick was an Austrian imperial ambassador to the Danish kingdom and in the German state of Hessen. Castle: The 400-year-old building was once used as Nazi death camp

Franz Heinrich served in the Austrian army, and later he became a general in the army fighting against Napoleon, playing a major role in Aspern in 1809 when Napoleon was beaten for the first time.

The count lost his right eye in 1813 in the battle of the nations in the German city of Leipzig when he fought against Napoleon’s soldiers. Ostrov: The town as it looks today

“I must admit I never had a good feeling about the place and now I am afraid.”

Paranormal investigator Hana Mackeova, who was called to look into the matter, said: “I felt some negative zones in some rooms.

“Something is definitely wrong there.

“I was very weak, felt sick and I had to leave.”

Local council employee Zuzana Zelezna, one of those who have offices in the castle, said: “The ghost removes objects at night. “We know that nobody cleans the rooms affected.”

“According to family legends Franz Joseph Heinrich Schlik carried a silver box always with him, even at battles.

“The silver box was a case for important documents and coins.

“The legend says that he has been guarding his silver box even after his death.”

The Count is reported to have been a popular figure during his lifetime, introducing educational reforms and developing both local agriculture and the economy. 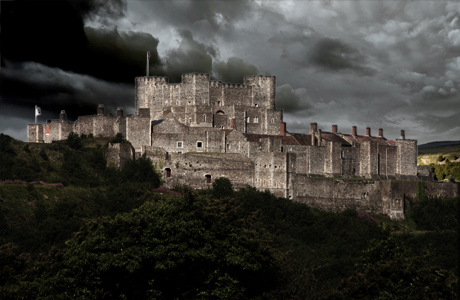 Caught on camera: Is this a ghost floating across entrance to Dover Castle?

By Chris Richards The chilling scene was caught on a CCTV camera at the historic landmark in Kent This is the extraordinary moment a...