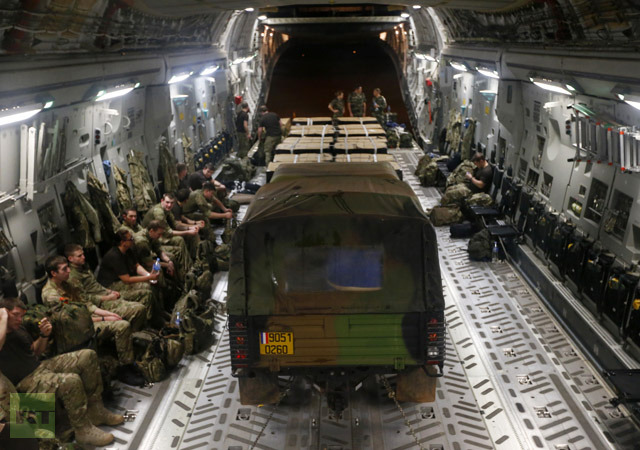 The US has pledged intelligence and logistic aid to French forces battling al-Qaeda militants in Mali. In response to the French bombardment of the country, rebel leaders pledged to strike the “heart of France” and open the “gates of Hell.”
French president Francois Holland hailed the latest overnight airstrikes on rebel targets as “achieving their goal” and said that assembling an African force to back up the French could take a “good week.” “We will continue the deployment of forces on the ground and in the air,” Hollande added.
The international community has rallied behind France’s campaign in Mali, offering logistical support. Fears have been voiced on the international stage that if al-Qaeda-linked rebels entrench in Mali, the country could become a platform for them to spread throughout the region.

US Defense Secretary Leon Panetta confirmed that the US was providing intelligence to French forces in Mali. “One is obviously to provide limited logistical support, two is to provide intelligence support and three to provide some airlift capability,” Panetta said during a press briefing.
“We have made a commitment that al-Qaeda is not going to find any place to hide,” Panetta told reporters on Monday.
However, he added, “There is no consideration of putting any American boots on the ground at this time,” Panetta told a news conference after meeting his Portuguese counterpart on the first leg of a trip to Europe.
Canada, Belgium, Denmark and Germany have also publicly supported the French incursion, pledging logistical support in the crackdown on the rebels.
West African defense chiefs will meet on Tuesday to approve the deployment of ground troops into Mali to tackle the Islamist rebel forces.
“On January 15, the committee of Chiefs of Defense Staff will meet in Bamako to approve the contingency plan,” the mission head of the Economic Community Of West African States (ECOWAS), Aboudou Toure Cheaka, told Reuters.In one week, troops would effectively be on the ground as a precursor to a full intervention plan, Cheaka said.
The original UN-approved initiative to deploy 3,330 West African troops was scheduled for this September, but the plan was brought forward when the French began their aerial bombardment of northern and central Mali on Friday. Nigeria, Burkina Faso, Niger, Guinea and Senegal have all pledged troops, but said that a full deployment would have to wait because of training constraints.
The French government issued a statement on Monday that it would send 2,500 troops to support Malian government soldiers and the West African security force. France has already deployed some 750 troops to Mali under ‘Operation Serval.’
Despite the heavy French bombardment of rebel targets in the northern and central regions of the country over the weekend, Islamist militants are continuing to advance in their push towards the capital Bamako.
Rebel militants wrested the town of Diabaly from Malian security forces in a counterattack, the French Ministry of Defense reported on Monday. A leader of the al-Qaeda-affiliated of Movement for Oneness and Jihad in West Africa (MUJAO) told AFP that the rebels would strike the “heart of France” for their “attack on Islam.”
The French had “opened the gates of hell” and sprung a trap far “more dangerous than Iraq, Afghanistan and Somalia,” the MUJAO leader said.
Northern Mali was captured by Islamist militants nine months ago; the international community has been debating since then over what action should be taken. The conflict escalated last week when France launched its air assault to “maintain stability in the region.”
The EU will hold a meeting on Thursday to assess the situation and how best to aid the French forces in Mali.