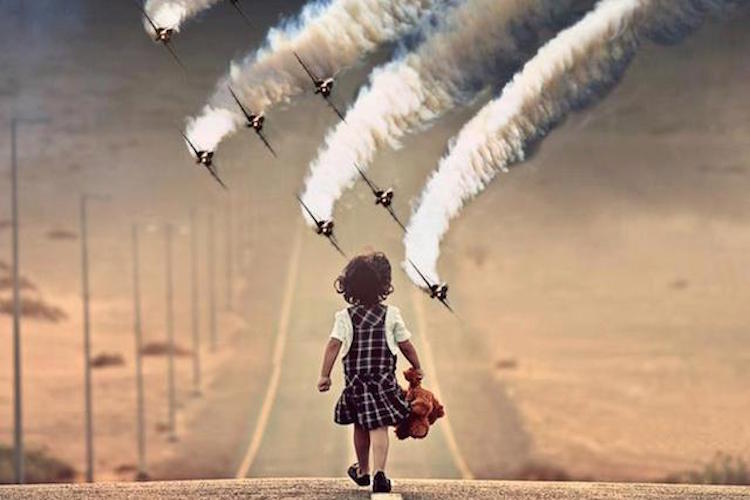 “Be regular and orderly in your life, so that you may be violent and original in your work.” ~Gustave Flaubert

What does this mean exactly? It simply means be ruthless in your questioning regarding your beliefs, your thoughts and your theories, especially those you hold dear and codependently cling to. It also means be open-minded, tolerant and loving regarding the freedom of others and the health of the environment, especially in the sense that you are interdependently connected.

The expression “fuck the war machine!” is succinct in expressing the polarities of this concept. In just four short words belief, thought, and theory are violently attacked while no persons nor environment are harmed, and while both people and the environment are guarded against future harm.

People’s feelings may get “hurt.” But so what? The people all caught up in their feelings are the ones clinging to belief, thought, and theory at the expense of actually harming others. Fuck both feelings and the war machine!

It rolls off the tongue. Say it. “Fuck the war machine!” It feels good to say it. It’s audacious and courageous. It’s nonconformist yet compassionate. It’s focused anger and yet loving kindness. All at the same time. It strikes at the heart of overreaching power while also empowering the powerless. It’s filled with insouciance and bloodymindedness, despite the Powers That Be. But it’s also fierce and loving on behalf of all cultures and the biotic community.

At its core, war is a violent mix between homicide and ecocide. It’s two “rights” obliterating each other’s rights. Contrastingly, peace is a nonviolent mix of tolerance and love. It’s two “wrongs” (in the sense that we are a fallible species) admitting they could be wrong.

“Fuck the war machine” strikes the chord between the weak violence of war and the robust nonviolence of peace. Think: Warrior in the Garden, Peaceful Warrior, and the Art of Fighting Without Fighting.

“It is an absurd contradiction to speak of peace, to negotiate peace, and at the same time promote or permit the global arms trade. Is this war or that war really a war to solve problems? Or is it a commercial war for selling weapons in illegal trade and so that the merchants of death can get rich?” ~Pope Francis

Let’s admit it, the Military Industrial Complex has a serious complex. When did we transform from a nation founded upon dissent to a nation dumbfounded by a tyrannical war machine hellbent on dropping bombs on people for profit?

Let’s stop kidding ourselves. The elephant in the room is a long-nosed, heavy-breathing, militant asshole with its trunk up our skirts. Even worse, it’s a flappy-eared, terrorist-generating war machine with an American flag tattooed on its flank. But nobody wants to acknowledge it. It reeks to high-hell of rotten peanuts and drone strikes, but nobody wants to admit that it’s standing right fucking there! Obesely hogging all the room.

Meanwhile, education is a cat, healthcare is a mouse and infrastructure is a cricket, and they’re all being starved and crowded out by this giant asshole of a militarized elephant sucking up all the oxygen.

Wake up and smell the collateral damage! Kowtowing to a terrorist-generating death machine that just fattens the pockets of weapons manufacturers while innocent people die in the crossfire is fundamentally immoral. Indifference to such a monstrosity is the height of insanity. Lest you remain one of the ignorant members of a profoundly sick society, it’s time to rise-up and say: “Fuck the war machine!”

As WWII Navy Veteran Ted Stanford put it, “At the end of the cold war we could have diverted tax dollars to the quality of our lives, things like health care, education, infrastructure, eliminating poverty, and protecting against climate change. Alas, the peace dividend never happened. Why not? Because the military, and persons profiting from the military, like weapons manufacturers and their lobbyists in Congress didn’t want to. That’s why. Only 8 percent of Americans polled in 2014 wanted the United States to lead the world military. But that 8 percent won out. That’s plutocracy.”

Fuck the war machine and fuck the plutocracy that keeps it churning!

Peace is two “wrongs” admitting they could be wrong:

Becoming a “sea,” as Nietzsche suggests, means becoming tolerant and open yet fierce and unapologetic. It means becoming so absolutely healthy that your very existence is an act of catalyzing the unhealthy and profoundly sick society that surrounds you. It means becoming a tonalizing force of nature despite an atonal culture. Derrick Jensen said it best: “Love does not imply pacifism.”

Thoughts and prayers mean fuck-all when it comes to facing down the war machine. Creative action is paramount. But you must not allow your actions to be reduced to the cowardly level of violence and war. That gives Goliath the advantage. Lowering yourself to the depraved level of warmongers just makes you one. As Audre Lorde said, “The true focus of revolutionary change is never merely the oppressive situations which we seek to escape, but that piece of the oppressor which is planted deep within each of us.”

Indeed. We must guard against lowering ourselves to the physical violence and hate that fuels the war machine. A new, more flexible, more intelligent, more antifragile tactic of violence is necessary to turn the tide. We must become resilient in our stance of compassion and love but also ruthless in defending it against tyranny. This requires self-defense only as a last resort. Up until that point The Art of Fighting Without Fighting is essential.

This could mean anything from tricking the unhealthy system and the sick society (through Sacred Clown tactics) to creating radical art that thwarts its stranglehold on authority and forces people to think outside the box. It could mean ninjaneering nonviolent resistance through civil disobedience (or counting coup). It could mean using philosophy and psychology to plant radical thoughts into the minds of the ignorant masses. As Rebecca Goldstein said in Plato at the Googleplex, “Philosophical thinking that doesn’t do violence to one’s settled mind is no philosophical thinking at all.”

Peace means allowing the radical art of others no matter how “wrong” it may seem, while also defending the self and people against the kind of immoral action that violates the golden rule and the nonaggression principle.

Being violent through the medium of art counterintuitively maintains a healthy balance and creates peace as it challenges the minds of the people to be openminded and tolerant of others. Whereas being violent in action creates only chaos and war.

As Ralph Waldo Emerson wisely stated, “A man is to carry himself in the presence of all opposition…I ought to go upright and vital and speak the rude truth in all ways…Your goodness must have some edge to it — else it is none.”

True tolerance is understanding that the human condition is fundamentally fallible and remaining peaceful in action and violent in art, despite. Peaceful action allows for freedom while violent art challenges the violent actions that could lead to war. It’s fuzzy logic, sure. But we are a fuzzy species.

Gary Z McGee, a former Navy Intelligence Specialist turned philosopher, is the author of Birthday Suit of God and The Looking Glass Man. His works are inspired by the great philosophers of the ages and his wide awake view of the modern world.

This article (Fuck the War Machine! Choosing the Courage to Defy Warmongers) was originally created for The Mind Unleashed and is published here with permission. It may be re-posted freely with proper attribution and author bio.

Advertisement. Scroll to continue reading.
In this article:featured, peace, war