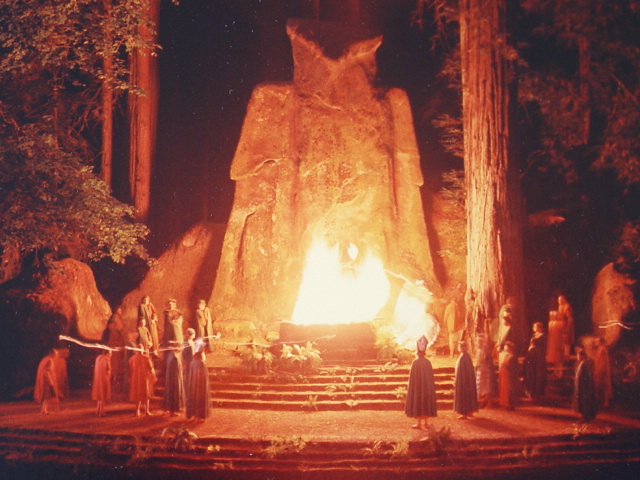 With the Bilderberg conference this year receiving far more media coverage than ever seen before, it’s tempting to believe that, finally, the secretive gatherings of the world’s rich and powerful are being exposed. It was certainly a step in the right direction – the more lights shining in the murky shadows of corporate and political subterfuge the better. But another secretive meeting looms on the horizon, one of much older provenance than the Bilderberg group with potentially far more sinister implications.

Recently, a friend of mine brought up the subject of Bohemian Grove. Someone had mentioned it to him in passing and his reaction was par for the course – immediate dismissal that such an event could possibly happen, and that the very thought of it was wild conspiracy talk. “The leaders of the world gathering in the woods to perform occult rituals based on mock human sacrifice? Sheer nonsense! There’s be some proof of this if there was any truth to it. The media would have a field day covering something like this!” He had a point – these certainly are outlandish claims, and you’d expect anyone who makes them to be able to back them up with some evidence, and from reputable (in his eyes, mainstream) sources, not some “dodgy internet conspiracy website”. Fair enough, I thought – a perfectly reasonable request.

The first result that comes up from a Google search for “Bohemian Grove” is Wikipedia – far from perfect on many issues but hardly reknowned for peddling obscure conspiracies. “In mid-July each year, Bohemian Grove hosts a two-week, three-weekend encampment of some of the most powerful men in the world.” The sources for this statement include an article by Philip Weiss in Spy Magazine called “Masters of the Universe Go to Camp: Inside the Bohemian Grove” reproduced at the website of University of California’s Professor of Sociology, William Domhoff. Dumhoff has also penned a lengthy article discussing the Grove meeting in terms of “social cohesion,” adopting the standard mainstream response to questions about the camp, concluding that “even though they provide evidence that there is a socially cohesive upper class in the United States, the activities at the Grove are harmless. The Grove encampment is a bunch of guys kidding around, drinking with their buddies, and trying to relive their youth, and often acting very silly.” Predictably, this essay omits all mention of the Manhattan Project – but I’m getting ahead of myself.

Wikipedia is kind enough to provide us with photographic evidence – albeit somewhat dated (1967) – that truly powerful men are in attendance at the Grove (no women guests are allowed). The photograph shows Richard Nixon, Ronald Reagan and others having what appears to be an amiable chat: 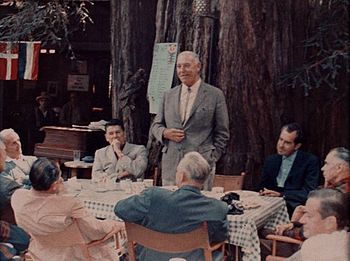 Interestingly, following this image to its source reveals that it is from the US government-affiliated Lawrence Berkeley National Laboratories Image Library, and the following comes under Seaborg’s comments (Glenn Seaborg was a Nobel Prize-winning Chemist who made important contributions to the Manhattan Project): “Dr. Seaborg likes to describe the exclusively elite campground and club, The Bohemian Grove, as a place, “where all the important people in the United States decide the agenda for our country the following year.”” A bit of digging for a quote from Nixon and his memoirs published in 1978 provides us with the following: “If I were to choose the speech that gave me the most pleasure and satisfaction in my political career, it would be my Lakeside Speech at the Bohemian Grove in July 1967. Because this speech traditionally was off the record it received no publicity at the time. But in many important ways it marked the first milestone on my road to the presidency.”

The Bohemian Grove has been discussed in a number of mainstream publications. In 2004 the San Francisco Chronicle ran a lengthy piece entitled “THE CHOSEN FEW / S.F.’s exclusive clubs carry on traditions of fellowship, culture — and discrimination“; in 2009, Vanity Fair published “A Guide to Bohemian Grove” which largely echoed the general mainstream response that nothing untoward takes place, saying, “the most suspicious activity that takes place in the grove is the alleged logging of old-growth redwood trees.” This was echoed a year later in an article in the New York Times, “Redwoods Hideaway for the Elite Goes On, but Protest Days Fade“.

Dan Barry’s NYT article contains a line which is indicative of the manner in which the mainstream dismisses the significance of the Cremation of Care ceremony held at the Grove. Barry states, “To quote the sacred script of the grove’s notorious Cremation of Care ceremony, which includes the requisite summer-camp assembly of robed men, a 40-foot concrete owl, and a body burned in effigy (conspiracy theorists note: it is not a real body).” While the ceremony may not be related to the child sacrifices offered to Moloch, as some have claimed, nevertheless such an off-hand dismissal ignores the fact that many of these men are, in public, devoutly Christian – one wonders what their constituents and customers would think if they knew that behind closed doors they enjoy enacting Pagan-style rituals including mock human sacrifice. The reader might ask themselves how their community – or the authorities, for that matter – might respond were they to don robes and hold mock human sacrifices of their own in the woods at night …

Here is some footage of the ceremony:

Leaving aside the sincerity with which attendees engage in such ceremonies (and, for that matter, their potential deeper meaning) the real concern for many is that these rich and powerful men are meeting in private to set policy and, as Seaborg stated above, to “decide the agenda for our country.” Is it all just a bit of harmless fun, as the media likes to tell us, or is it, like the secretive Bilderberg Group, a forum for real policy-making and forward planning?

While the Grove motto (adopted from Shakespeare) may well be “Weaving Spiders Come Not Here,” there is at least one egregious example where matters of business and politics were not left at the door: Bohemian Grove was the birthplace of the Manhattan Project which led to the development of the atomic bomb. It’s perhaps impossible to get any further removed from the idea that they don’t discuss anything of importance than the development of nuclear weapons.

The fundamental obstacle to honest and thorough investigative reporting on Bohemian Grove is the fact that many of the leaders of mainstream media outlets are also in attendance (for example, Walter Cronkite reportedly provided the narration for the Cremation of Care ceremony). Just as, until this year, the media either ignores or whitewashes anything relating to the Bilderberg Group (which their top men also attend), so too do they make light of concerns over the Grove. In this situation, revelations over back room agreements – whether or not they’re of the same magnitude as the initiation of the Manhattan Project – are likely to be few and far between, coming from the rare infiltrators or whistleblowers who leak attendee lists. 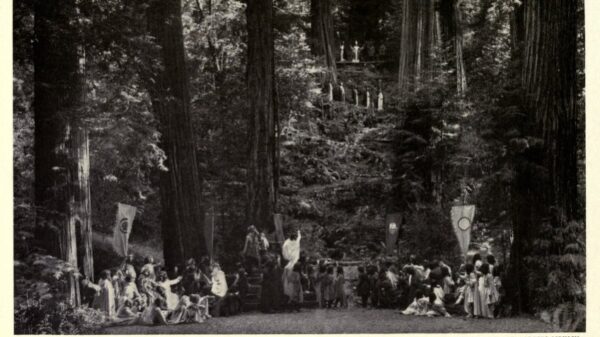 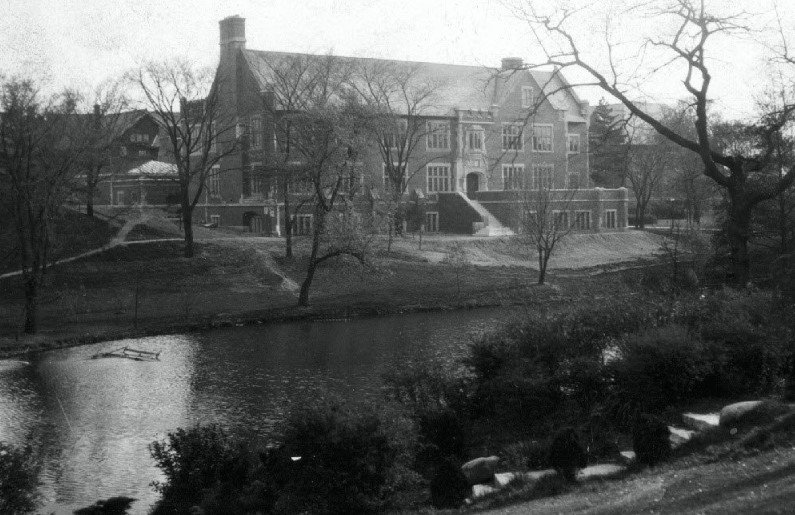 Ideally, institutions of higher learning are environments where young people who are first stepping out on their own are encouraged to become independent thinkers...

Inside Bilderberg: Clues Left In The Grove Hotel reveal a dirty piece of their financial agenda

21st Century Wire says… As the dust had settled from Bilderberg’s global weekender held at The Grove Hotel in Watford, England, some members of... 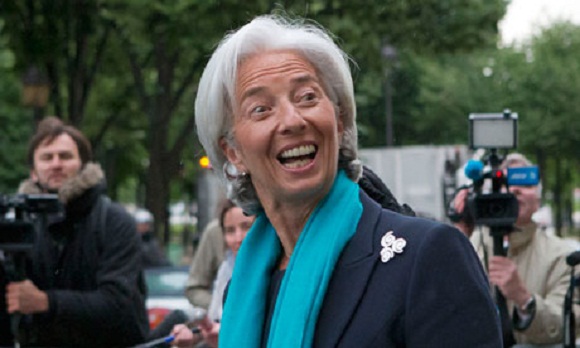 We love what we do and wish to continue our work and cover this year’s meeting in London, England. and only with your help...