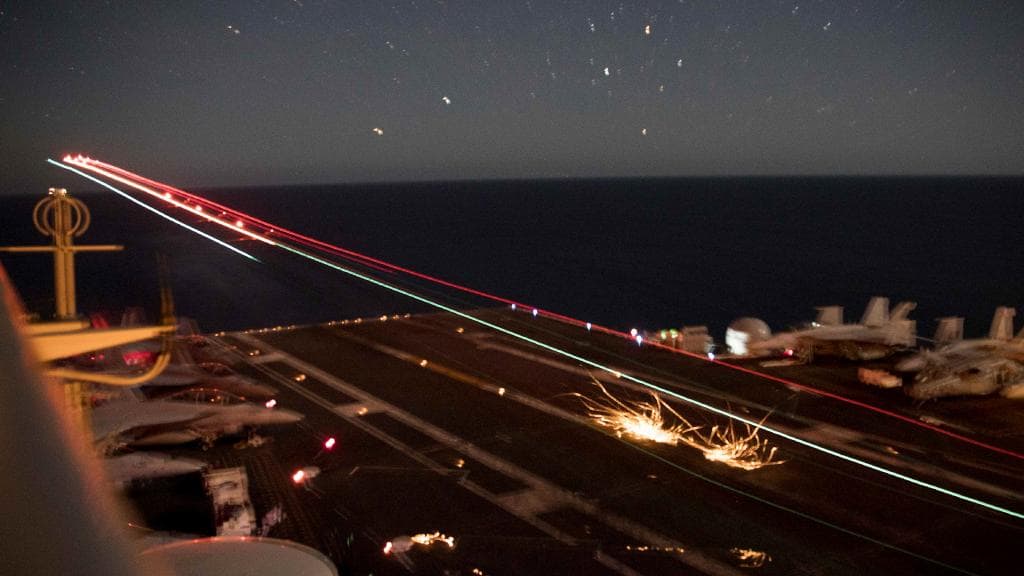 Since 2015, dozens of Navy F-18 fighter jets have encountered unidentified aerial phenomenon (UAPs) — once commonly referred to as UFOs — off the East Coast of the United States, some not far from the nation’s capital. Encounters have been reported by other military aircraft and civilian airliners elsewhere in the U.S. and abroad, too, including videos shot by airline passengers.

What these UAPs were and who was flying them — whether friends, foes or unknown forces — remains a mystery. Yet careful examination of the data inevitably leads to one possible, disturbing conclusion: A potential adversary of the United States has mastered technologies we do not yet understand to achieve capabilities we cannot yet match.

It is long past time for Congress to discover the answers to those questions and to share at least some of its conclusions with the public.

The U.S. government came a large step closer to confirming the reality of UAPs when the U.S. Navy acknowledged in late April that “there have been a number of reports of unauthorized and/or unidentified aircraft entering various military-controlled ranges and designated airspace in recent years.”

But first, members of Congress and the public need to become familiar with the facts.

Unfortunately, it is impossible to gauge the overall level of UAP activity since military personnel rarely report their encounters for fear of damage to their careers. Even when reports are filed, the information generally is ignored because nobody “owns” the UAP issue and the various commands and agencies involved have not shared information on UAPs.

It remains to be seen whether the Navy’s new UAP reporting process will be emulated throughout our massive, almost feudal security apparatus in which the barons sometimes spend more time protecting bureaucratic turf from rivals than protecting U.S. territory from adversaries. Thus, any genuine solution to the UAP issue must address the issue of interagency coordination and collaboration.

The good news is that America already possesses vast sensor networks, ranging from the depths of the oceans to the harsh bleakness of space, capable of collecting the requisite information. All that Congress need do at this juncture is require the secretary of Defense and the director of national intelligence to review the UAP issue and deliver a report providing a comprehensive assessment. This report should include not only an estimate of the situation but a description of the structure and processes required to ensure effective collection and analysis going forward.

The Trump administration should be free to provide the report at whatever level of classification it deems appropriate. One entity with which I am involved — To the Stars Academy (TTSA), an organization of former U.S. intelligence and national security experts analyzing the UAP phenomenon — has placed notional legislative language on its website to facilitate this discussion. While some modest manpower costs might be incurred, the TTSA proposal does not require new Defense Department funding. It also averts the spectacle of public hearings and the attendant risk of injecting partisanship or grandstanding into the process.

Why should Congress act? In the first instance because it is Congress’s job to raise, organize and fund the military. It can hardly do so without being fully aware of the threats we face. Indeed, that is why we have a law requiring written notice to Congress of serious intelligence failures. Most Americans would no doubt agree that our inability to identify scores of mysterious aircraft repeatedly violating restricted U.S. military airspace in recent years is a shocking failure. But there is no need to wrangle over compliance with intelligence oversight laws. The Navy’s recent admissions regarding UAP intrusions provide more than adequate grounds for requiring a written report to Congress.

Perhaps we’ll learn that Russian President Vladimir Putin was not idly boasting when he bragged, more than a decade ago, that Russia’s “newest technical systems will be capable of destroying targets at an intercontinental distance with hypersonic speed and extreme maneuverability.” While it seems unlikely that Russia — or China — has pulled that far ahead of the U.S., there is no reason to leave this to chance. And while the Navy’s announcement seems to eliminate the prospect that these vehicles are secret U.S. military aircraft, perhaps we’ll find that Elon Musk has some amazing new toys.

It is not just that the UAPs that military pilots are encountering are strange — no paint, rivets, wings, antenna, safety lights, transponders or exhaust — but they sometimes are so fast and maneuverable that they defy our understanding of physics. For example, some of these vehicles appear to withstand forces of acceleration far greater than maximum design limits of any man-made aircraft. No wonder some military witnesses — often, pilots who are scientists or engineers themselves — actually lean toward the hypothesis that they are not from this world. Like all good scientists, these pilots recognize that our theories must adjust to facts and new information, however daunting, not the other way around.

If our best minds were brought to bear to study the technology confronting us, much as the Japanese did in the 1850s when confronted by Admiral Perry’s fleet, then unprecedented technological breakthroughs could occur in short order. For example, the fact that these craft do not seem to produce exhaust yet fly vast distances at immense speeds could provide technical solutions to our energy crisis.

Some of America’s finest aviators and air defense personnel are trying to get our attention. They are not panicked — but they are right to be concerned. It seems clear the facts demand further action. In light of the facts, a mere report requirement seems a very modest response to potentially disturbing new national security information.

If UAPs turn out to be toys of Elon Musk’s making, we’ll all breathe a sigh of relief. If they are Russian, we’ll be glad we took action now rather than kicking the can down the road. If we learn that someone else’s more advanced version of our Voyager spacecraft has reached Earth, then this humble measure will forever transform our understanding of the universe and man’s place within it.

By any measure, the effort required to prepare a report for Congress seems to be a bargain.

Christopher Mellon served 20 years in the federal government and was deputy assistant Defense secretary for intelligence from 1999 to 2002, and for security and information operations from 1998 to 1999. From 2002 to 2004, he was minority staff director of the Senate Select Committee on Intelligence under Sen. John Rockefeller IV (D-W.Va.). He is a national security affairs adviser for To the Stars Academy of Arts and Science and a consultant to HISTORY’s nonfiction series, “Unidentified: Inside America’s UFO Investigation,” which premieres May 31.