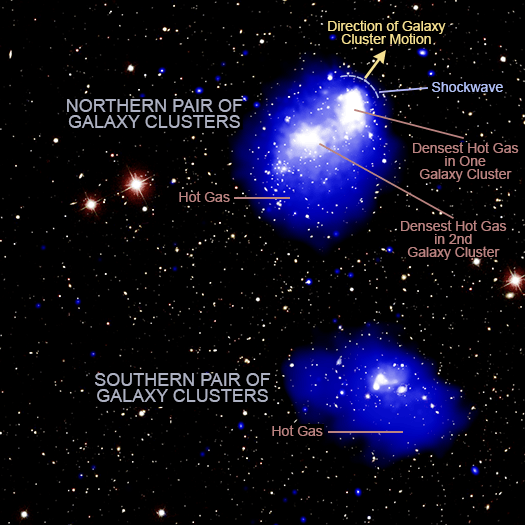 If you’ve discovered four galaxy clusters being merged together into one giant galaxy that may be the largest of all time, who would you call to verify that claim? Is there a Guinness Book of Universe Records? There should be, because discoveries like this one may become more common as space agencies plan more Great Observatories like the Chandra X-ray Observatory, Hubble Space Telescope, Compton Gamma Ray Observatory and the Spitzer Space Telescope. Chandra gets to claim this record with the news that NASA astronomers used it to find Abell 1758, a space village contains two pairs of galaxy clusters made up of hundreds of small galaxies that are on a collision-course towards a record-setting cosmic collision.

“The Chandra data revealed for the first time a shock wave — similar to the sonic boom from a supersonic aircraft — in hot gas visible with Chandra in the northern pair’s collision. From this shock wave, researchers estimate two clusters are moving about 2 million to 3 million miles per hour (3 million to 5 million kilometers per hour), relative to each other.”

In a recent press release, NASA scientists reveal that the quadruple galaxy cluster system Abell 1758, first discovered in 2004 and located about three billion light-years from Earth, is not just four clusters moving around each other — they’re speeding towards each other like desperate soaked sink spiders circling a cosmic drain. While the newly-detected shock wave of hot gas helped determine their speed, Chandra’s view of how so-called heavy elements – those heavier than helium – are re-distributed during the collision process shows how close the galaxies in each pair are to becoming one, and how close those are to one massive merger.

NASA released an excellent highlighted image of the northern and southern pairs of the colliding galaxies and a video recreation of the impending crash.

And the expected date for the explosion guaranteed to light up the universe … or at least the phones at the Guinness Universe Records office is? For that, one needs to dig into “Forming One of the Most Massive Objects in the Universe: The Quadruple Merger in Abell 1758,” the paper describing the discovery published recently in The Astrophysical Journal and written by Gerrit Schellenberger, Larry David, Ewan O’Sullivan, Jan Vrtilek (all from Center for Astrophysics | Harvard & Smithsonian) and Christopher Haines (Universidad de Atacama, Chile). Needless to say, it won’t be anytime soon.

The James Webb Space Telescope, scheduled to be launched in 2021, will join the Great Observatories until the Hubble is retired. In the meantime, astronomers will continue to use the Chandra X-ray Observatory to search for the telltale shock waves of hot gas that indicate crashing galaxy clusters.

Crashing Galaxy Clusters would make a great name for a band, and Shock Waves of Hot Gas sounds like their first heavy metal hit. Opening act? The Desperate Soaking Sink Spiders, of course.

In this article:colliding galaxies, heavy elements