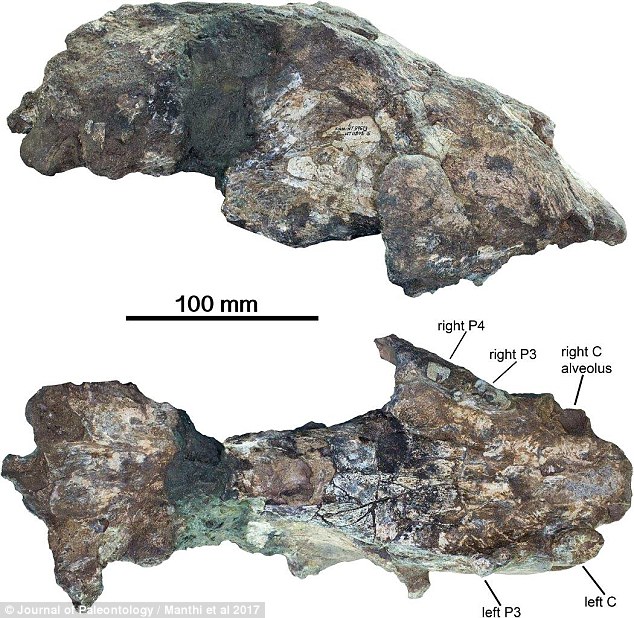 A gigantic lion that stood as tall as a human has been uncovered for the first time by experts hunting for fossils in Kenya.

Scientists say the beast is believed to have lived on a diet of giant plant-eating mammals that roamed east Africa around 200,000 years ago.

Researchers say it is most likely from an extinct species that was substantially larger than any modern population or subspecies of lion.

An international team of researchers – including experts from the National Museums of Kenya and the universities of Utah and Arkansas – found the fossil at Natodomeri in northwest Kenya.

To calculate its size, which was far larger than modern lions, they looked at the remains of the creature’s teeth and skull.

Male lions are, on average, around 4ft (1.2 metres) in length, but the newly uncovered species was closer to a human’s 5.6 ft (1.7 metres) average height.

Writing in a paper published on the finds, its authors said: ‘The image of the lion is pervasive in human culture from its earliest preserved expression in Palaeolithic art to more modern cultural references like Disney’s the Lion King.

‘In the scientific world lions are also a focus for attention.

‘This skull is the first indication of the existence of a population of giant lions in the late Middle and Late Pleistocene of eastern Africa, perhaps occasioned by the presence of greater megafaunal biomass than today.

‘The skull is remarkable for its very great size, equivalent to the largest cave lions of Pleistocene Eurasia and much larger than any previously known lion from Africa, living or fossil.’

One now lives in eastern and southern Africa, while the other includes lions in west Africa and India.

Diminishing numbers of lions worldwide have become an escalating cause for concern.

However, in recent weeks it was announced that India’s endangered lion population, which lives in one single forest, is fighting back from the brink of extinction.

The endangered Asiatic lion – whose numbers plummeted to just 180 individuals in the 1960s – has now increased to more than 600, it was reported on March 6.

The full findings of the study were published in the Journal of Paleontology.

Advertisement. Scroll to continue reading.
In this article:giant lions