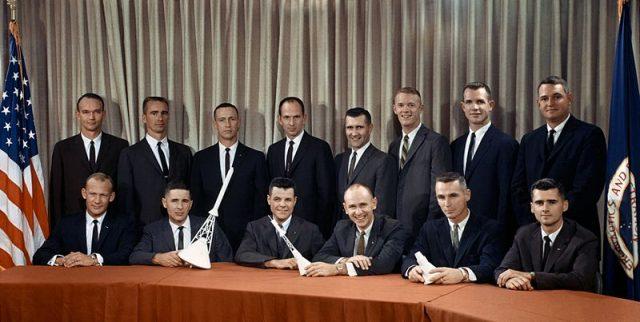 There are few astronauts more respected and remembered than those who served on the Apollo missions – thirty-two military jet and test pilots who made or died training for the three-man Apollo missions that eventually sent humans to the Moon and back. When they have spoken – about space travel, the Moon, future missions, UFOs and other subjects – the world has listened. Rusty Schweickart, the Lunar Module pilot on Apollo 9, spoke recently about the need for an international commitment to protect Earth from killer asteroids. As usual, his comments are worth listening to.

“During the Apollo 9 mission we were dark-adapted for an experiment, looking at the spectacular night-time Earth, watching weather fronts, thunder storms and lightning, a really great sight out of the window. Then, who knows who said it first, but one of us said they saw a little flash down there and someone else says ‘yeah, I saw it too,’ but you wouldn’t have mentioned it if the first person hadn’t said it. And then we realized: that was a meteor, burning up below us. Wow, below us – which meant it came down through our altitude!”

A close encounter of the worst kind – an asteroid impact in space – instead became an experience that forever influenced Russell “Rusty” Schweickart. When he was selected in 1963, Rusty Schweickart was a unique member of NASA Astronaut Group 3 – the fourteen astronauts selected by NASA to succeed the two-man Gemini missions in the three-man Apollo flights that would eventually lead to a walk on the Moon. Those names are well-known to the public today — Collins, Cunningham, Gordon, Aldrin, Cernan, Chaffee to list a few – but back then they were better known in the military as fighter pilots and test pilots. Schweickart was an experienced Air Force pilot, but he was also a research scientist at the Experimental Astronomy Laboratory at the Massachusetts Institute of Technology in the fields of upper atmospheric physics, star tracking and stabilization of stellar images.

The 1969 flight of Apollo 9 was the first flight of the lunar module, piloted by Schweickart, and the first spacewalk of the Apollo missions, also by Schweickart. During a recent ESA Open Day at the European Space Agency’s ESTEC technical center in Noordwijk, The Netherlands, the former astronaut heard about the latest plans to stop asteroids like the one the Apollo 9 crew encountered before they destructively impact Earth. In 2022, NASA’s Double Asteroid Redirect Test will hit the smaller member of the Didymos binary asteroids. Then, if approved this month by Europe’s space ministers, the ESA’s Hera mission will perform a close-up survey of the asteroid and crater after impact. Schweickart says he likes the idea of a multi-spacecraft mission rather than a single asteroid-seeking rocket.

“And one of the key unknowns of the kinetic impactor technique is a term we call ‘beta’ – when we hit the asteroid, how much stuff is going to come flying off? If it’s moving at greater than escape velocity, then that adds to the momentum shifting the orbit, boosting the technique’s effectiveness. That factor depends on the asteroid’s composition and structure, and we need a close-up look to find out what that is.”

In 2002, Schweickart helped found the B612 Foundation (named for the planetoid in The Little Prince), whose primary mission is “protecting the Earth from asteroid impacts and informing and forwarding world-wide decision-making on planetary defense issues.” Since asteroids can hit anywhere on Earth, Schweickart has long advocated international cooperation in both deflecting space rocks and in determining which ones to hit. He sees the NASA/ESA tandem as the first example of this cooperation. Unfortunately, we’re barely into asteroid defection business and have no idea what an impact will do – it could actually push the space rock into a higher likelihood of impact.

“In that case the observer spacecraft would have another job to do – to switch to gravity tractor mode, using altimeters and ion engines to stay just away from the asteroid, and nudge its orbit enough to miss the keyhole as well as the planet.”

Rusty Schweickart makes it sound so easy and doable, but the former Apollo and Skylab astronaut knows the dangers of space. He was the backup pilot for Roger B. Chaffee on Apollo 1, which ended in the tragic deaths of the crew members in a ground test accident. He also knows how expensive a worldwide asteroid deflection system would be and how difficult it is to get nations to agree on anything, let alone unseen dangers from outer space. That’s why he stays involved in both the technology and the politics of space.

At 84, Rusty Schweickart is still influenced by that near-impact experience on Apollo 9. For that, we should all be grateful.

In this article:Apollo 9, gravity tractor mode