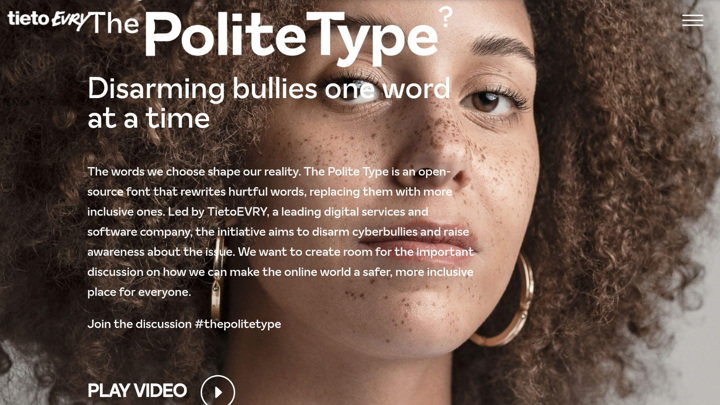 A Finnish technology company has unveiled an unusual way to combat online bullying, racism and other sins of modern society: a new font that automatically converts offensive language into neutral text. How it works?

The Polite Type font team has decided to rid the world of racism, Internet trolls, cyberbullying and other forms of intolerance. The “polite” font blurs common phrases that are potentially offensive to the interlocutor, and also replaces individual harsh statements with softer words.

For example, if an offended girl in an angry fervor writes to her boyfriend “I hate you!”, Then the young man will see the following phrase: “I do not agree with you!” Or, if the main gossip of the office writes to a friend about someone, “She’s ugly,” the subscriber at the other end of the line will probably be surprised by the message “She’s unconventionally beautiful.” An attempt to write “You are a fool” will result in the appearance of the phrase “You are a fool” on the screen of the interlocutor.

As for racist statements, their font will automatically be replaced with the correct names of races and religions. Quite accusatory concepts (an idiot, a dumbass and others that cannot be mentioned in any way in a text that children can read) will be blurred.

The very case when the meaning will be understood from the context, but instead of offensive words, the interlocutors will see only diplomatic “piiii”.

Jokes aside, but such a font can really make society a little more attentive and tolerant towards the people around it. Internet trolling has reached phenomenal proportions today.

According to the UN, a third of young people experience online bullying. More than 35% of victims of this type of psychological abuse report attacks of anxiety, a fifth have problems with sleep. About one in five children do not want to go to school because of these problems.

“Our goal is to promote equality and global unity,” says Kia Haring, director of communications for tietoEVRY, which created the font. “We want bullies to reflect on their words and their real meaning …”

The polite font team also points to the fact that the global COVID-19 pandemic has exacerbated the problem. Schoolchildren and students around the world went online, lost the ability to dump accumulated negativity in the outside world, stopped meeting teachers and social workers who helped them cope with negative emotions earlier, which caused many of them to vent their anger on the Internet.

The feeling of isolation and loneliness crippled not only many adults but also children. Moreover, not only those who are prone to psychological violence against others, but also the victims who also lost public support, suffered harder.

As Haring emphasizes, the younger generation suffers more from bullying, because, unlike adults, children and adolescents are sometimes not psychologically ready to reflect offensive statements in their address and have not yet learned to cope with their emotions. As a result, deep psychological scars remain in their souls for many years.

Yes, humorous teasing is a common occurrence between friends and colleagues. And this is the same “part of the game” as everyone else. But, as a rule, such statements have no real basis.

If a person deliberately insults those whom he considers, to put it mildly, unworthy to walk on planet Earth, this is a completely different story. A “polite” font could well save the world from unconscious insults, but it certainly will not save the planet from those people who are overwhelmed with hatred towards other “participants in the process.”

The team behind The Polite Type understands this and does not oppose freedom of speech.

“We believe that the right to free speech includes the right to disagree. But hate speech is the wrong way to express your disagreement. We want aggressors to understand what their actions on the Internet lead to,” the developers write on their website.

Let’s add that the new open source font works with all popular text editors. The list of 1,800 offensive words was compiled in collaboration with Finnish teenagers and some organizations that advocate for equality.

In this article:cyberbullying, featured, Teenagers