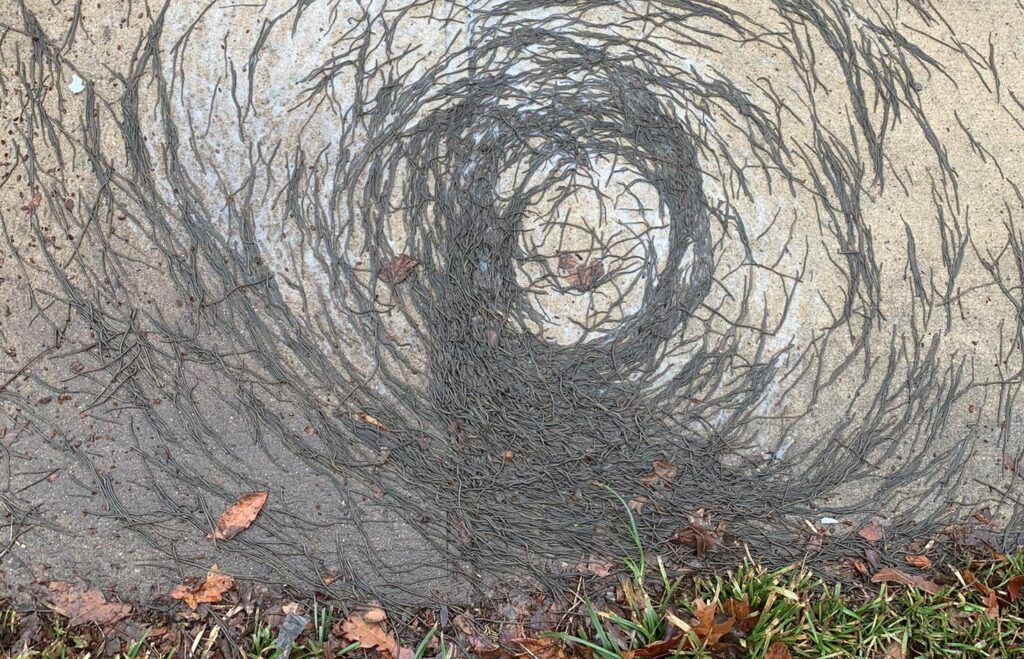 Spring rains often bring many earthworms to the surface, where they writhe on the ground and sidewalks. But recently, pouring rain in a town near New York was followed by something more unusual: a wormhole, a wormportal, “Wormnado”. There is an extensive article on these mysterious formations by LiveScience.

A resident of Hoboken, New Jersey, took a morning walk in the park by the Hudson River on March 25 when she noticed hundreds of worms spreading along the path.

The woman, who asked not to be named, told Live Science that after her initial surprise, she noticed something even weirder – several worms formed a cyclone-like shape, creating a spiral where the edge of the grass touched the concrete.

The woman took the photos and sent them to Tiffany Fisher, a Hoboken city councilor, who shared the images of the “tornado of worms” on Facebook.

“It’s clear that worms appear after the rain, but I’ve never seen anything like this!” Tiffany wrote.

When an eyewitness saw the worms tornado formation, they were no longer spiraling, although individual worms were still wriggling in place, she told Live Science.

There were no open drain pipes nearby, and although most of the worms were scattered in a large vortex, there were many of them extending beyond the outer edge of the spiral; According to the woman, they clung to the wall of a nearby building and rolled down the curb onto the road.

While it is tempting to speculate that the worms were lining up into a vortex in preparation for the Worm Moon, the first supermoon of 2021, it is highly unlikely that the spiral was a lunar ceremony. Then, what’s the matter?

According to the University of Wisconsin-Madison, worms breathe through the skin, so when heavy or prolonged rain saturates the soil with water, the worms must come to the surface or they risk drowning. Earthworms usually live alone, but sometimes they form herds on the surface. As researchers reported in 2010 in the International Journal of Behavioral Biology, worms gather in groups and tell each other where to go.

Scientists in this study found that earthworms of the species Eisenia fetida can form clusters and “influence each other, choosing a common direction during their migration,” and they did this through touch, rather than chemical signals. Such collective behavior can help earthworms survive environmental threats such as floods or dry soil, and it can also be a defense strategy against predators or pathogens, according to the study.

One exceptional example of earthworm grazing was captured on video in 2015 by rangers at Eisenhower State Park in Denison, Texas. In the footage posted on the Texas Parks and Wildlife YouTube channel, several huge masses of pink earthworms wriggle along the road.

Aquatic worms such as the California black worm (Lumbriculus variegatus) can also form a huge living node – known as a blob – of 50,000 worms when threatened by arid conditions. However, the reason for the appearance of the Hoboken worm is less clear.

“This form of tornado is really interesting,” said Kyungsoo Yu, professor in the Department of Soil, Water and Climate at the University of Minnesota.

Yu is studying how invasive earthworms are transforming forest ecosystems, and while worms are known to emerge en masse from the soil after rainfall, he has never seen them form a spiral before, Yu told Live Science in an email.

Lab chief Saad Bhamla, an assistant professor at the Georgia Institute of Technology, suggested in an email that sudden changes in soil water combined with the shape of the landscape could explain the spiraling wormhole.

As you can understand from the extensive explanation of Live Science – not only we have not seen this with worms, but also the famous professors who have been dealing with worms all their lives.

There are several options for a reasonable explanation of what is happening, and the first assumes that worms gather around some kind of spatial structure that people do not see, unregistered devices and physicists do not know anything about it. That is, there is something like a “place of power”, something lies in the ground and forms some kind of fields affecting primitive organisms.

The second explanation assumes that the worms are not so primitive. For example, the mycelium of the forest, as well as the interlacing of the equine system of trees, form structures that strongly resemble the synapses of the nervous system, and in theory the forest can have a mind, magnitudes higher than the level of consciousness of human beings. Similar superstructures are, most likely, in all species – from bees to worms. This mind, incomprehensible to us, is a driving force for the worm formations.

Finally, there may also be some kind of mutation, under which they will practice on spirals, and then they will gather in a flock and go to seize power over the world.