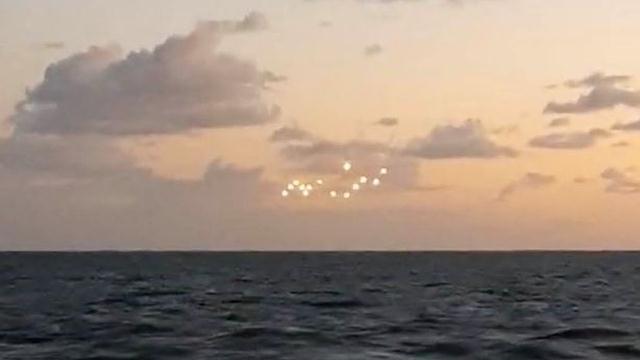 William Guy was enjoying seascape from a Ferry when he spotted something unusual in the sky. Of course, he recorded it with his cell phone and then posted it on YouTube. So far it has garnered more than 50,000 views and comments on what can be treated are disparate.

The incident happened a week ago on the journey from Ocracoke Island to Swan Quarter (North Carolina, United States). In the video you can hear the man saying, “Look, nothing in the sky,” and after making a general panning, he focuses on a fleet of bright objects that seems to be suspended over the ocean.

«Can someone tell me what that is? We are in the middle of the ocean, on a ferry. There is nothing around, look, there is no land, nothing, ”he adds.

Also, other people surprised on the boat are also heard saying, “You only see this kind of thing on TV.”

In YouTube comments some think that it is UFOs, perhaps like those that the US Navy. He acknowledged that he pursued recently. Others seek more mundane explanations – and probable in this case – such as flares.

“I know what those lights are,” Derrick Chennault said in the video. “As a former Marine based on the 2nd Marine Air Wing in Cherry Point, North Carolina, I can say that we used to regularly release flares from our planes during military exercises that take place at sunset. I am glad that the Marines continue to scare people.

However, Guy does not seem to be completely convinced of the explanation given by the former military. “I talked to a lot of people here on the island, and there are those who believe they are really flares, but others also said they had never seen anything like what I captured on video.”

National Park Service officials at Cape Lookout told the Charlotte Observer that they are not sure what the lights are, although they labeled them as “peculiar.”

Advertisement. Scroll to continue reading.
In this article:Fleet of UFO, Ocracoke Island