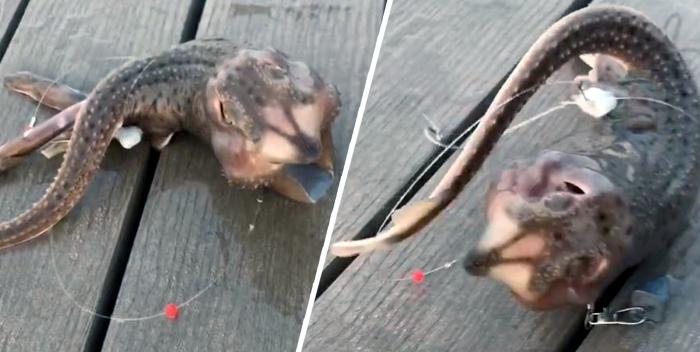 A user of the TikTok social network under the nickname @ natalie1526n posted a video with a mysterious sea creature. The publication became viral and collected more than a million views.

The fisherman caught an unusual creature with a huge head and three tentacles and called his mother. “What a monster, mom, look! Mom, can you see this? ”Says the author of the video. She saw her son’s catch and shouted: “What a horror, what a creature this is!” In the next frames, the creature begins to wriggle in different directions, and the fisherman asks: “What is happening?”

Netizens began to wonder what it is. Some speculated that it was a mutant octopus or a curtailed ramp. Others felt that it is a squid in the video. Many commentators emphasized that the creature looks intimidating. “I don’t know what it is, but I don’t like it,” one of the users said.

In 2019, a fisherman from the Australian city of Sydney posted a photo of an unusual sea creature in the Trapman Bermagui group on Facebook and asked netizens to suggest his name.

The photograph shows a fish with translucent skin and a large mouth.