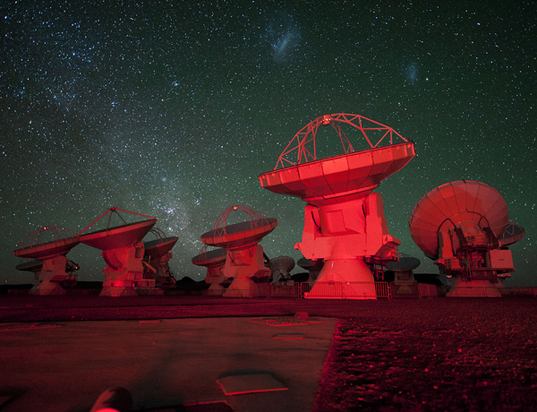 A long time ago, in a galaxy far, far away, billions of stars were born.

This picture  – one of the first to be taken by  ALMA – the world’s newest and most powerful telescope – shows an ancient galaxy forming stars at a breathtaking rate.

During such ‘starbursts’, hundreds or thousands of stars are born a year. In contrast, our galaxy, the Milky Way only sees around just one new star a year.

The first image from the ALMA telescope: This montage combines data from ALMA with images from the NASA/ESA Hubble Space Telescope, for five distant galaxies. The ALMA images, represented in red, show the distant, background galaxies, being distorted by the gravitational lens effect produced by the galaxies in the foreground, depicted in the Hubble data in blue.

THE BEST IS YET TO COME…

The astronomers were using only a partial array of 16 of ALMA’s full complement of 66 giant antennas, as the observatory was still under construction at an altitude of 5000 metres on the remote Chajnantor Plateau in the Chilean Andes.

When complete, ALMA will be even more sensitive, and will be able to detect even fainter galaxies.

For now, astronomers targeted the brighter ones.

They took advantage of a helping hand from nature, too: using gravitational lensing, an effect predicted by Einstein’s general theory of relativity, where light from a distant galaxy is distorted by the gravitational influence of a nearer foreground galaxy, which acts like a lens and makes the distant source appear brighter.

The red arcs in the image represent a distant galaxy rapidly creating stars around 12billion years ago – the light generated has only just reached us on earth.

The central white dot depicts another calmer and closer galaxy.

It was already known that starbursts – bright and brief periods of rapid star formation – were much more common in the early universe than today but scientists had struggled to date them.

The latest images, taken by a stunning series of radio antennae on plateau 16,400ft above the Chile’s Atacama desert, reveal that such intense periods of stellar birth occurred earlier in the universe than thought.

Data from more than two dozen galaxies shows that on average, the starbursts took place 12 billion years ago, when the universe was just under two billion years old.

This is a full billion years earlier than previous studies had indicated.

Two of the galaxies are the most distant of their kind ever seen – so far away that the light in the form of radio waves captured by ALMA started their journey just a billion years after the Big Bang.

In one of these, water was detected- the most distant observation of water in the cosmos to date.

Some of the distant star-forming galaxies are as bright as 40 million million suns, the journal Nature reports.

The picture was taken by capturing light emitted in the form of radio waves by gases in the galaxy and measuring  and warping  the light’s waves.

By taking into account stretching caused by the expansion of the universe, astronomers can work out how long the light’s journey has taken and so place a galaxy at the right point in cosmic history. How it works: This schematic image represents how light from a distant galaxy is distorted by the gravitational effects of a nearer foreground galaxy, which acts like a lens and makes the distant source appear distorted, but brighter, forming characteristic rings of light, known as Einstein rings. An analysis of the distortion has revealed that some of the distant star-forming galaxies are as bright as 40 trillion Suns, and have been magnified by the gravitational lens by up to 22 times.

Lead researcher, Joaquin Vieria, of the California Institute of Technology in the US, said: ‘The more distant the galaxy, the further back in time one is looking, so by measuring their distances we can piece together a timeline of how vigorously the universe was making new stars at different stages in its 13.7billion year history.’

The ALMA observatory, which is part-funded by Britain through the Science and Technology Facilities Council, was officially launched today.#

This picture was taken while it was still under construction and so drew on just 16 of the telescope’s 66 giant radio antennae.

But when operating at full power, the resulting images should be ten times sharper than those of the Hubble space telescope.

To get such pictures from a single land-based radio telescope, it would have to be ten miles wide.

Researcher Carlos De Breuck, of the European Southern Observatory, said the results show that ‘ALMA is a powerful new player in the field’.

Leicester University astronomer Professor Andrew Blain, who wrote an accompanying article for Nature, said: ‘With sharper imaging than the Hubble Space Telescope, and the ability to measure the different parts of a faraway galaxy independently, ALMA is starting to give us a much more complete picture of the growth and formation of our universe.’

The array of 66 telescopes is being built in Chile because it is one of the few places in the world where it is still possible to find a high, dry location unaffected by pollution from artificial light. Under construction: Four of the first ALMA antennas at the Array Operations Site (AOS), located at 5000 metres altitude on the Chajnantor plateau, in the II Region of Chile Radio telescope antennas of the ALMA (Atacama Large Millimeter/submillimeter Array) project, in the Atacama desert, some 1500 km north of Santiago, on March 12,2013. How the ALMA telescope works

Dryness is particularly important as moisture in the air absorbs the radio waves the dishes are trying to capture.

Speaking at the observatory’s official opening ceremony, Chilean president Sebastián Piñera, said: ‘One of our many natural resources is Chile’s spectacular night sky.

‘I believe that science has been a vital contributor to the development of Chile in recent years. I am very proud of our international collaborations in astronomy, of which ALMA is the latest, and biggest outcome.’

ALMA’s UK project manager, Professor Brian Ellison,  of the STFC’s Rutherford Appleton Laboratory in Oxfordshire, said: ‘The difficulty of constructing an instrument of the scale of ALMA, and that is located in a challenging environment, should not be underestimated.

‘It is a testament to the vision, skill and perseverance of all those involved that not only is construction complete, but early operation is producing outstanding science.

‘I am delighted and proud that the UK, through a variety of institutes and organisations participating at various stages of the project’s development and construction, has made a large and very successful contribution to ALMA, both scientifically and technically.

‘The Apple founder, the late Steve Jobs once said that “….every once in a while a revolutionary product comes along that changes everything…..and one is very fortunate if you get to work on just one of these in your career’.

‘The advent of ALMA will undoubtedly revolutionise our view of the Universe and for me, it represents working on a revolutionary product 66 times over.’

Dr Thomas Greve, from University College London, and one of two British scientists who contributed to the Nature paper, said: ‘Our study has shown that little more than one billion years after the Big Bang, extreme starburst galaxies in the Universe, forming stars at a rate of more than a thousand per year, were a much more commonplace occurrence than previously thought.

‘This runs counter to the traditional understanding of massive galaxies forming gradually over much longer periods of time.

‘This is a discovery that only ALMA, with its incredible observing capabilities, could have made.’

British science and engineering has benefited from £40million of contracts from ALMA.

Experts at the STFC’s Rutherford Appleton Laboratory in Oxfordshire made the half-ton cooling systems at the heart of each dish, other contributions include vital software for processing the information gathered by the telescope and material for the actual dishes. Babak Tafreshi, one of the ESO Photo Ambassadors, has captured the antennas of the Atacama Large Millimeter/submillimeter Array (ALMA) under the southern sky in another breathtaking image
In this article:ALMA, Chile, galaxies, telescope, universe