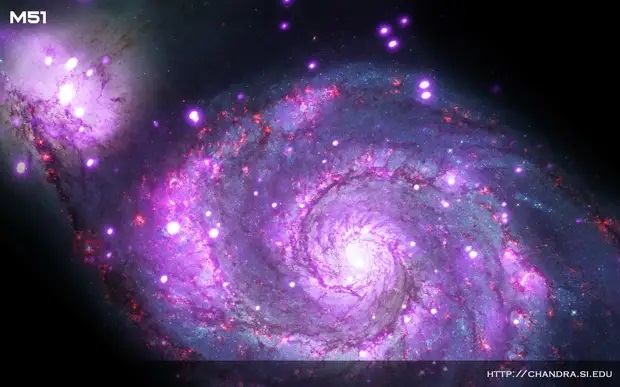 The Chandra X-ray Space Telescope has found the first potential exoplanet in another galaxy. The planet orbits in a binary star system in a galaxy 23 million light-years away and was discovered by the eclipse of its star, a compact, ultra-powerful X-ray source.

A new method for searching for exoplanets, which is also suitable for studying other galaxies, is to register a decrease in the brightness of powerful X-ray sources (degenerate stars), which is caused by the transit of the planet. Thus, it was possible to detect the object M51-ULS-1b in the spiral galaxy M51 (the “Whirlpool” galaxy in the constellation of the Dog Hounds), which may be a gas giant or a brown dwarf in the X-ray binary system. An article by astronomers at the Harvard-Smithsonian Center for Astrophysics about this possible discovery appeared in September 2020 and is still available as a preprint at arXiv.org; it will probably be published later in the Monthly Notices of the Royal Astronomical Society (MNRAS).

The Whirlpool Galaxy, or M51, is a spiral galaxy 23 million light years distant. It is distinguishable through binoculars (apparent stellar magnitude about + 8ᵐ), and it is easy to find it in the northern sky near the extreme star of the Big Dipper bucket, although formally the site belongs to the neighboring constellation of Hounds.

It is one of the first extragalactic objects to be photographed in the middle of the 19th century. The galaxy has a companion – the neighboring dwarf galaxy NGC 5195, which it gradually eats, so a pair of galaxies looks spectacular in the pictures. It is assumed that the painting by Van Gogh “Starry Night” depicts this very object, which was then well known for publishing astronomical sketches in magazines.

Extragalactic planets are objects in star systems or lonely planets outside our Galaxy. Most of the about 6,000 exoplanets discovered today orbit around stars at distances of up to hundreds of light years, that is, they belong to the nearest galactic environs.

More distant stars, even within the Galaxy, are beyond the scope of studying their planetary systems. Moreover, this applies to objects in other galaxies at distances of millions of light years (for example, the distance to the center of our Galaxy is 25 thousand light years, and the nearest giant galaxy Andromeda is located at a distance of 2.5 million light years). Nevertheless, several extragalactic candidate planets are known.

They were all discovered by the method of gravitational microlensing (distortion of the trajectory of light rays from a distant light source in the gravitational field of a star and its planetary system).

This is an indirect method, and at extragalactic distances there is practically no possibility to independently confirm the discovery of an exoplanet by other means. Object M51-ULS-1b became the first extragalactic planet, which was discovered by the method of transit, standard for the study of “near” exoplanets – observations of periodic “eclipses” by the planet of its star in the process of moving in orbit.

The transit method is one of two popular methods for exploring nearby exoplanets, along with the radial velocity method. Currently, the TESS space telescope is in orbit, the main task of which is to monitor several thousand of the nearest stars in the entire celestial sphere and search for their planets in this way (for more details about this NASA project, there is a separate article on our website).

A similar problem was previously solved by the Kepler space telescope, which has already completed its work. The main difference between the two projects is that TESS monitors almost the entire sky sector-by-sector, exploring stars at distances of up to 100-200 light years, while Kepler focused on a small area, but captured stars at distances of up to 3 thousand light years (there is also note on the site).

But extragalactic distances are orders of magnitude greater, and precise observations of the brightness of ordinary stars even in neighboring galaxies are not yet possible.

Therefore, only superbright objects are suitable for research in other galaxies (not necessarily stars that are bright in the optical range). So far, these are X-ray sources, which are most often binary systems, where a compact object (black hole or neutron star) actively absorbs the matter of the companion star.

There can be up to several hundred such objects in galaxies. In the above Chandra image of M51 (left), they appear as bright dots. If the system contains a large exoplanet, then it can cause a short-term full or partial drop in the brightness of the source in the X-ray range, similar to the optical transit that telescopes can track.

The very first exoplanets discovered in the mid-1990s in our Galaxy were also found near such exotic objects. Subsequently, when the number of exoplanets began to be measured in thousands, interest for obvious reasons shifted to planets in star systems similar to the Sun (or even better – in their “zones of potential habitability” and preferably closer, for example, near Proxima Centauri).

A group at the Harvard-Smithsonian Center for Astrophysics searched for transit events among 2,624 archived light curves for more than two hundred X-ray sources in spiral galaxies M51 , M101, and  M104, according to the Chandra orbiting telescope .

Two other objects here are also familiar to astrolamists – these are the photogenic galaxies “Pinwheel” in Ursa Major (M101) and “Sombrero” in Virgo (M104), well oriented for observations in relation to us. One of the cases found is in good agreement with the light curve in the single transit model. It belongs to the X-ray source designated M51-ULS-1 – a young massive binary system closer to the outskirts of the galaxy M51.

The object that caused the source to completely darken for 20-30 minutes could theoretically belong to several classes, including rocky or gas planets, as well as stars – white dwarfs or M-class stars (ordinary stars are red dwarfs).

The properties of the light curve, according to the authors, exclude the “stellar” nature of this object, which received the “exoplanetary” designation M51-ULS-1b… It is assumed that it is slightly smaller than Saturn and may be a hot gas giant or a substellar object – a brown dwarf. It moves in an orbit of a large radius (according to estimates – tens of astronomical units) and at one time survived a supernova explosion in this binary system, which led to the formation of a compact X-ray object.

The authors of the work suggest that the method can be used to search for exoplanets both in other galaxies and in the Milky Way, and its accuracy will increase with the quality of data from orbiting telescopes.