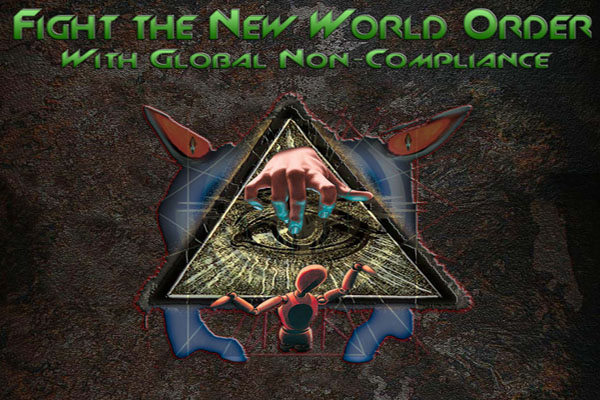 When I played and later coached college basketball, I had a reputation for being a no-nonsense, intense competitor who was not afraid to put everything on the line in my search of victory.

Today, I have the same drive and competitive spirit towards the work that I am now doing, that I did when I played and coached. I am fully aware that I have developed an in-your-face style when it comes to dealing with the criminals who now run our government. I make no apologies for my aggressive approach. After all, didn’t Jesus forcibly remove the banksters from the Temple? However, in this article, I am going to present a different side of myself and reveal why I am so determined in the fight I am waging against the New World Order. This article is not about self-glorification, my friends and I need allies because we need much help to wage the fight that is coming and I want all of you to see that anyone can do this work and we need everyone of you to assist.

In the second part of this series, I am going to be revealing the specific threats, for which I have undeniable confirmation that we are going to be facing in the upcoming months.

Does History Make the Man, Or Is It the Other Way Around?

A decade ago, my community was thrust into a fight for our economic survival by corrupt forces, which were covertly bringing America into the North American Union. These forces were led by Senator John McCain and they wanted to steal our private properties in my rural community to make way for the CANAMEX Highway.

McCain’s bankster friends wanted our homes for nothing. Against all odds, we prevailed. I evolved into a leadership role for our group. As a result of engaging in this fight, I learned how to conduct myself in the eye of the media and how to write persuasive essays which educated the public as to our plight against the treasonous forces led by McCain.

In retrospect, I can see that God has his hand on my community and specifically on me. I was an educator, a mental health counselor and a college basketball coach by trade. I was not a media person. Nor, was I a community leader and activist. However, in our eight year fight against the McCain led forces of the New World Order, I was being prepared for what I am doing now, fighting the good fight for God and country.

Anyone, and I mean anyone can do what I am attempting to do, you just need to take the first step. One glance at the Bible, one can see that a person does not need to possess any special skills to do God’s work. One only needs to be open to the call to serve.

Thy Will Be Done

When I sit down to write an article which reveals serious corruption at the highest levels of this government, or I broadcast a show on the same topics, I ask God to help me do what needs to be done.  People constantly ask me, aren’t you afraid? And yes, sometimes, I am afraid, until I pause and silently reaffirm my trust in God to give me the strength to do what needs to be done.

In the past several months, I have written about the coming civil war, the presence of dangerous foreign troops on our soil, the growing presence of public venues which will be used for detention and death camps, missing nukes, Obama’s purposeful dismantling and weakening of our military through his treasonous subversion, the coming of WWIII and the intent of certain politicians who have been placed in key positions to economically and socially destroy this country along with its Christian heritage.

I believe as many people do, that our nation is under God’s judgment, but He does not desire to see America turn away from Him. He seeks restoration, but He will not continue to let us abandon Him without consequence. He desires to see the restoration of our core values and to become better and stronger than we have been in the past.

In order to accomplish these goals, we must fight evil where it is at, in the alleyways, on Wall Street, in the White House, in our schools and yes, evil has even invaded our churches through government sponsored programs. Today, churches have become government sponsored churches through federally sponsored tax exemption provisions in the tax codes. Many of our clergy belong to the DHS “Clergy Response Team” in which they are told by the government that in times of crisis, they should be quoting Romans 13 to keep their “sheep” compliant to the wishes of the government.

If your church does not address the topics of illegal wars of occupation which kills millions of innocent people, gay marriage and abortion, then your religious leader is a fraud and your church is an instrument of the federal government. If you are caught in this pseudo-Christian paradigm, then you need to leave your church immediately and begin to conduct Bible studies in your home away from watchful intrusion of the DHS (aka the Department of Hell’s Servants).

What Are We Fighting For?

Twenty years ago, I was befriended by a former NSA operative, Vance Davis. Although I did not realize it at the time, Vance was mentoring me and what I learned from Vance was that even the NSA teaches some of its agents that the evil forces on this planet seek to control the human soul but have failed in their attempts. To compensate for their shortcomings in this endeavor, the globalists have a very specific compensatory plot which seeks to destroy, enslave the survivors and to morph humanity into something that is almost to hideous to speak of, namely, transform the human race into something that is totally nonhuman. The process I am speaking of is called transhumanism.

I have interviewed Barb Peterson and Patrick Wood on this subject and soon I will be interviewing Daniel Estulin on the topic of transhumanism. This is Satan’s ultimate insult to our God. In short, if we ever allow the globalists to establish their kingdom, humanity many not survive in its present form and there will be nothing left to save.

Subversion and treason will bring down this country if it is allowed to continue. If America falls, humanity will fall.

I have been studying the globalist playbook in the same manner that I used to scout my college basketball opponents. I have sought to understand the strategies employed by our enemies as they seek to destroy humanity. Here is a snapshot of what I have learned. The Constitution had to be eviscerated because it did not place national and individual sovereignty in the hands of an evil central government. Instead, the people are sovereign, not the government under the Constitution. To the globalists, God and Jesus must be removed from all places where it is possible to do so. The globalists hate Jesus because if His power were to spread to His followers, we could defeat anything the globalists could use to subjugate humanity. The globalists also seek to destroy the family, the building block of society.  CPS is doing a great job in this arena. Death camps must be built to take care of people which cannot be re-educated. Wars, disease and artificial famines must be created to reduce the population to 500 million in order to make humanity more “manageable”. Finally, our soul must be destroyed so that we will all bow down to Satan in an effort to prevent the return of Jesus.

I plan on employing a Winston Churchill strategy. We will fight them in the streets, in the alleys, in the trenches and we will never give up so long as God gives us the strength to fight.

Yes, I know and believe about the Tribulation and the End of Days. However, God honors those who help themselves. We have to build something for Jesus to return to. God did not give mankind a fighting spirit to merely kneel before the forces of the New World Order. I am hoping that many will heed the clarion call and take this movement much further than someone like myself can.

I believe in respecting all men, even our enemies, but I will not bow before any man. Yes, people like me may die, but how many thousands of times will a sheep die before the globalists finally cut their heads off and cut out the hearts out of their former minions in the same manner that Hitler and Stalin did when they completed their respective takeovers?

No elaborate summary is needed here. It is simple, we fight, or humanity perishes. We are, as Sun Tzu says, on death’s ground. We will either march to salvation or be carried to our final resting place.

I timed this two part series to culminate on the eve of the birth of the Lord Jesus for all the obvious reasons. Tomorrow’s article will focus on the irrefutable proof that all the trials and tribulations that are coming our way are indeed real and that if anything, I have spent the last few months actually understating the threats.

On Christmas, I will celebrate the only hope that humanity has and I will take time to love and cherish my friends and family. Then on December 26th, it is time to roll up my sleeves and go back to the front and do what I have been called to do. My colleagues and I could use your help. No experience or specific skills are needed. You only need to want to survive what is coming and to serve the only side that gives humanity a chance to flourish. This Christmas, ask for guidance, trust that an answer will be coming and join the fight with everything that you have.

Advertisement. Scroll to continue reading.
In this article:fight, NWO