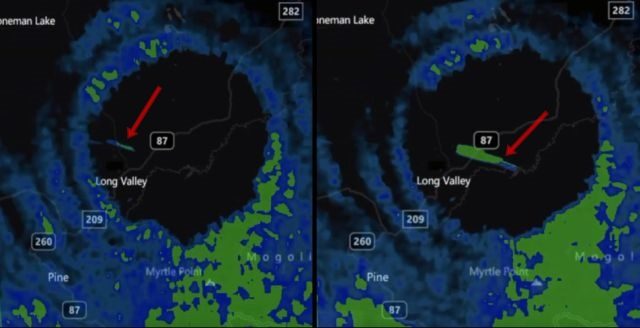 On August 28, 2019 there was an incredible amount of lightning in Long Valley around 9.45 pm, during which a strange vortex/portal appeared on the weather radar map just above Long Valley.

As if that wasn’t incredible enough, an anomaly came out of nowhere, entered and flew through the ‘vortex/portal’ at a very high rate of speed, once the object entered the vortex/portal, it disappeared.

According to MrMB333 the anomaly covered a distance of 60 miles in 20 minutes which is about 180 mph.

So, it looks like a portal opened up and something went through it, but what could it have been?

In this article:Long Valley, strange vortex