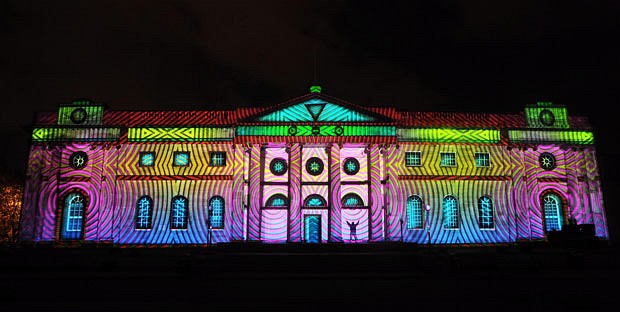 A couple claims they discovered images of a ghostly Victorian girl when flicking back through family photos taken during a trip to the museum.

John Burnside and Shona Backhouse, from Wakefield, West Yorkshire, say they had a ‘funny feeling’ when they visited the Castle Museum in York two years earlier with their son Johnthomas, then 18 months.

But it was only when they looked back through the snapshots two years later they noticed a faint black and white figure lurking in the images. Spooky: Shona Backhouse from Wakefield posed for this photo during a trip with her family to the Castle Museum in York. Two years later she claims she saw this black and white image of a young girl in Victorian costume (bottom right), as her and her partner flicked back through the photos

Mr Burnside, 27, said: ‘It’s enough to make you paranoid. It gives me goose bumps every time I think about it.’

The couple decided to look through the photos after Mr Burnside found his old mobile phone memory card in his pyjama pocket.

It was only then that they spotted the ghostly figure.

Mr Burnside said: ‘It was weird. I didn’t notice anything at first, then I thought I was imagining it. So I asked Shona and she said ‘Yes. It’s a little girl.’

‘When I phoned my mum she at first thought it might be a little girl that my sister lost, but my dad spotted that the girl in the picture was in Victorian dress. ‘Followed’: John Burnside, pictured here with his 18-month-old son Johnthomas, found the memory card in his pyjama pocket two years after they visited the museum. He says he made out this ghostly image of a young girl when he looked back on the photos

There have been claims in the past at Castle Museum is haunted.

A crew filming an episode of Derek Acorah’s Ghost Towns programme in 2006 insisted they had heard shrill voices and seen ghostly children running around.

Mr Burnside said: ‘There was not a little girl like that on the day at the museum. It was pretty dead there to be honest all through the day. Anyway, it looks like you can see right through her.

‘It is even more incredible when you think how many times those pyjamas have been through the wash with the memory card in the pocket.’

His partner Miss Backhouse, 25, who works in a tanning salon, said: ‘It is like it was following us because it was in the last picture of me taken outside.

‘It is really weird. I never noticed it until other day when we looked through the pictures. ‘Funny feeling’: Miss Backhouse told her partner that one of the rooms in the museum gave her ‘goosebumps and shivers’. The couple claim the shadowy figure must have followed the family around the museum

‘But I told John when was at the museum that I had funny feeling and didn’t like it there.

‘The room one of pics was taken in I wouldn’t go inside. It gave me goosepimples and shivers.

‘Our son was around 18 months’ old at the time. I can’t really remember if he sensed anything – but I know I didn’t like it at all though.’

Museum officials said they had no idea who the figure in the photographs might be.

Meanwhile, there has been increasing popularity for apps to create or enhance peoples’ own ghost photos, such as Ghost Capture. The Castle Museum in York where John Burnside and Shona Backhouse took family photos which later appeared to feature the shadowy figure of a young Victorian girl. Museum officials said they had no idea who the figure in the photographs might be

In this article:Castle Museum, ghost, York