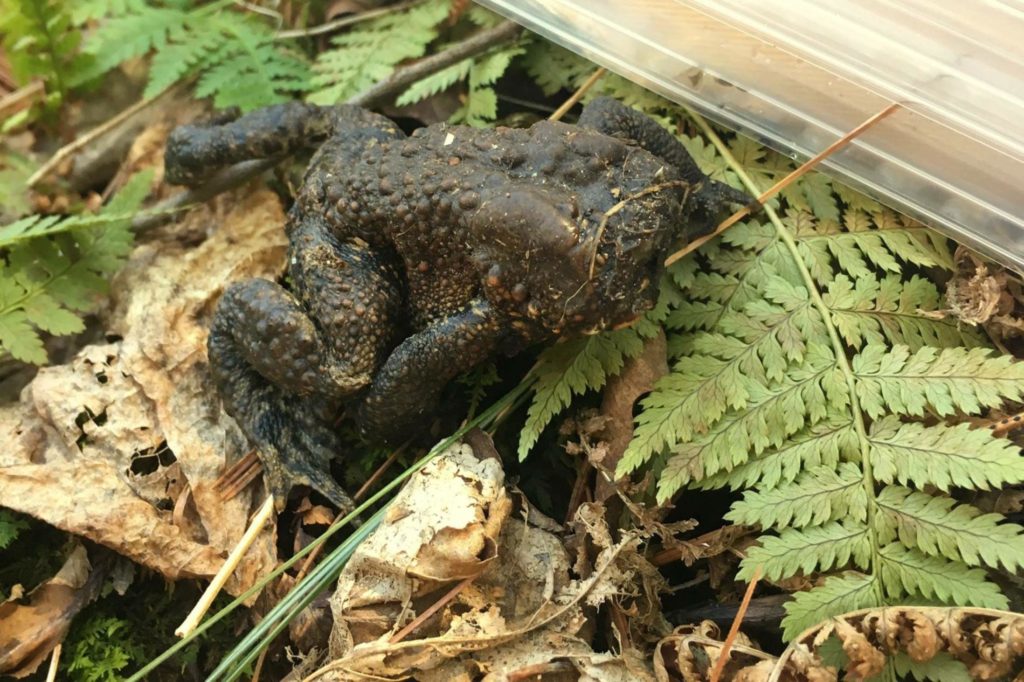 A toad found in a state forest in Connecticut startled researchers in the field because it had no face.

The amphibian, an adult American toad, was hopping into the researchers’ feet and other objects repeatedly while they were collecting information about newts. Jill Fleming, a herpetologist and student at the University of Massachusetts at Amherst, took notice. She and her colleagues took a closer look at the toad, and they were surprised to see that its eyes, nose, jaw, and tongue were completely missing.

She says the reason why the toad is missing its face is a mystery, though there are a few possible explanations.

“My initial thought, which I still believe is a likely explanation, was that the extensive injury was inflicted by one of the toad’s many natural predators during hibernation (for example, garter snakes or American mink),” she says. “For whatever reason, the predator did not finish the job and the toad was able to become active again on that early spring day—amphibians are incredibly resilient.”

Herpetologists on Twitter also thought it could be the result of parasitism by a toad fly, though Fleming thinks it’s less likely.

“I believe the injury happened during hibernation because it seemed to have healed over, which I don’t think it would have the opportunity to have done outside the toad’s hibernacula,” she says.

Amphibians like the American toad are cold-blooded, and need to hibernate to survive during the winter. American toads use their digging skills to burrow into the ground below the frost line, and their bodies produce ice crystals that slow their heart and stop their breathing until temperatures rise above freezing again.

Fleming says this isn’t something that she sees often in the field, and the reactions of her fellow herpetologists on Twitter also indicate they haven’t seen it frequently, either.

“Turtles can come out of hibernation with an injury as severe as a missing limb—their hardy shell protects their vital organs and many of them do just fine. But I have never seen anything with a head injury this severe still capable of getting around like this toad was.”

Unfortunately, the toad’s condition was so severe that Fleming doesn’t think it was alive much longer after she and her colleagues found it.

“It would not have been able to eat in this condition and was an easy target for predators,” she says.

Read More On This At National Geographic News