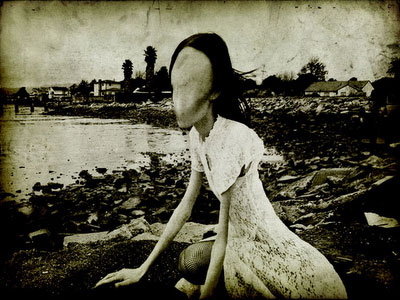 The Noppera-bo (Noppera-bo?), or faceless ghost, is a Japanese legendary creature. Noppera-bo (or Nopperabou) appear to be ordinary humans but they are actually shape shifters.

They usually appear to the victim as someone they know before erasing their facial features to scare them. They’re also known as a ‘no-face’ or ‘faceless ghost’ and they are known to be mischievous rather than malevolent. A favourite game of the Noppera-bo is to work in teams, where one of them scares a victim who then flees and finds another person walking late at night. The victim frantically relates their story to the stranger until they reveal that they too are a Noppera-bo. Although the Noppera-bo is considered a yokai due to it’s long history in Japanese culture, there are modern reports of sightings, including in Hawaii which has cultural links to Japan.

They are sometimes mistakenly referred to as a mujina, an old Japanese word for a badger or raccoon dog. Although the mujina can assume the form of the other, noppera-bo are usually humans. Such creatures were thought to sometimes transform themselves into noppera-bo in order to frighten humans. Lafcadio Hearn used the animals’ name as the title of his story about faceless monsters, probably resulting in the misused terminology.

Noppera-bo are known primarily for frightening humans, but are usually otherwise harmless. They appear at first as ordinary human beings, sometimes impersonating someone familiar to the victim, before causing their features to disappear, leaving a blank, smooth sheet of skin where their face should be.

Noppera-bo are physically harmless but delight in installing terror into their victims. They are a breed of faceless ghosts. Usually they are mistaken for a normal person when standing with their back towards the witness. When they Turn about they reveal a featurless smooth face that scares the wits out of the victim.

Yet the Noppera-bo is not finished with it’s prey yet. When the unfortunate person flees and and tries to tell the next person what they saw that person will invariably turn out to be the same Noppera-bo in disguse. At hearing the story the ‘person’ will then say “Did it look like this?”as their features melt away to reveal the featurless visarge of a Noppera-bo.

The Noppera-bo and the Koi Pond

This tale recounts a lazy fisherman who decided to fish in the imperial koi ponds near the Heian-kyo palace. Despite being warned by his wife about the pond being sacred and near a graveyard, the fisherman went anyway. On his way to the pond, he is warned by another fisherman not to go there, but he again ignores the warning. Once at the spot, he is met by a beautiful young woman who pleads with him not to fish in the pond. He ignores her and, to his horror, she wipes her face off. Rushing home to hide, he is confronted by what seems to be his wife, who chastises him for his wickedness before wiping off her facial features as well.
No Face is able to appear to others like a normal person, this is just an illusion. The Nopperabou really lacks eyes, a nose or a mouth. Instead of normal human features, nopperabou have only smooth skin. People who encounter nopperabou usually do not immediately realize that they are talking to something that is otherworldly, as the creatures are able to create the illusion that they have a normal human face.

A nopperabou will wait for the right moment before causing their features to disappear, scaring the person they are speaking with. People usually run into nopperabou at night in lonely rural settings, although they can appear anywhere as long as the area is deserted. The nopperabou’s primary purpose is to scare humans, but beyond that they do not seem to have any sort of agenda.

The Mujina of the Akasaka Road

On the Akasaka Road, in Tokyo, there is a slope called Kii-no-kuni-zaka, which means the Slope of the Province of Kii. I do not know why it is called the Slope of the Province of Kii. On one side of this slope you see an ancient moat, deep and very wide, with high green banks rising up to some place of gardens; and on the other side of the road extend the long and lofty walls of an imperial palace.

Before the era of street-lamps and jinrikishas [rickshaws], this neighborhood was very lonesome after dark; and belated pedestrians would go miles out of their way rather than mount the Kii-no-kuni-zaka, alone, after sunset. All because of a Mujina that used to walk there.

The last man who saw the Mujina was an old merchant of the Kyobashi quarter, who died about thirty years ago. This is the story, as he told it:

One night, at a late hour, he was hurrying up the Kii-no-kuni-zaka, when he perceived a woman crouching by the moat, all alone, and weeping bitterly. Fearing that she intended to drown herself, he stopped to offer her any assistance or consolation in his power. She appeared to be a slight and graceful person, handsomely dressed; and her hair was arranged like that of a young girl of good family.

“O-jochu [young girl],” he exclaimed, approaching her, “O-jochu, do not cry like that!…Tell me what the trouble is; and if there be any way to help you, I shall be glad to help you.” (He really meant what he said; for he was a very kind man.)

But she continued to weep, hiding her face from him with one of her long sleeves.

“O-jochu,” he said again, as gently as he could, “please, please listen to me!… This is no place for a young lady at night! Do not cry, I implore you! — only tell me how I may be of some help to you!”

Slowly she rose up, but turned her back to him, and continued to moan and sob behind her sleeve.

Then that O-jochu turned around, and dropped her sleeve, and stroked her face with her hand; — and the man saw that she had no eyes or nose or mouth,— and he screamed and ran away.

Up Kii-no-kuni-zaka he ran and ran; and all was black and empty before him. On and on he ran, never daring to look back; and at last he saw a lantern, so far away that it looked like the gleam of a firefly; and he made for it.

It proved to be only the lantern of an itinerant soba-seller who had set down his stand by the road-side; but any light and any human companionship was good after that experience; and he flung himself down at the feet of the soba-seller, crying out, “Ah! — aa!! — aa!!!”…

“Kore! kore! [Here, here]” roughly exclaimed the soba-man. “Here! what is the matter with you? Anybody hurt you?”

“Only scared you?” queried the peddler, unsympathetically. “Robbers?”

“Not robbers, not robbers,” gasped the terrified man… “I saw… I saw a woman — by the moat; — and she showed me… Ah! I cannot tell you what she showed me!”

“Ha! Was it anything like THIS that she showed you?” cried the soba-man, stroking his own face —which therewith became like unto an Egg

… And, simultaneously, the light went out.