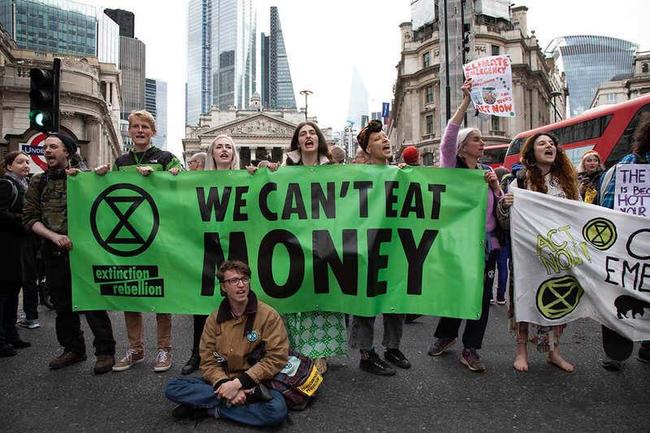 (Zero Hedge) R.T. News is reporting that ‘Extinction Rebellion’ protests are scheduled across 200 sites in London over the next several weeks. These protests could bring the city to a standstill as protestors demand government officials take immediate action to combat climate change.

Extinction Rebellion is expected to hold protests in 60 major cities across the world through late October. Some of the countries that could experience the most massive demonstrations are the Netherlands, Australia, Germany, Spain, France, the U.S.

These protestors have already taken over streets, blocked roadways, and disrupted public transportation in London, Sydney, Paris, and Berlin.

Extinction Rebellion have set up a stage for speakers and music, first aid tent, improvised cycle lane, and snack stall.

Extinction Rebellion are gloriously vibrant and peaceful protesters whether you accept or detest the disruption. I back the climate emergency urgency if fearing the tactics occasionally backfire but the good humour’s welcome when Westminster’s often plagued by Far Right thugs pic.twitter.com/2gNvsiNOqL

“If we keep on destroying, we destroy what allows us to live.”

‘Extinction Rebellion’ activists held protests around the 🌍 against climate change. Demonstrators brought London to a standstill, hundreds were arrested.

Extinction Rebellion’s message is that climate change is an emergency that requires drastic and immediate action. And the only way to force significant policy change is to shut down parts of major infrastructure, like roads, bridges, highways, rail, airports, and ports.

“Extinction Rebellion is widely credited with accelerating policy change in the U.K.,” said Robert Falkner, a fellow at Chatham House.

The group’s tactics are already causing severe economic and social disruptions in major cities across the world. While specific demands are wildly unrealistic, it seems that there’s a more sinister agenda at play.

The plan is to crash the global economy by unleashing climate change protestors into the streets to shut down critical parts of infrastructure. While protestors think they’re in the streets to save the planet — they’re really causing mini-economic shocks in cities across the world, simultaneously. These shocks are occurring in a period where the global economy has already opened up into a cycle of vulnerability, indicating the world could be one or two shocks away from a severe economic downturn.

If Extinction Rebellion succeeds in shutting down streets across the world in the next several weeks, then it could certainly point to slower economic growth for the world through year-end.

And what’s the reason behind climate change protestors shutting down cities and causing economic shocks across the world? Well — it’s all about crashing the global economy to install a new economic model called Modern Money Theory (MMT) that will transition the world economy into the new green era.

“One of the obstacles that has been listed to stopping climate change is having enough money to transition away from fossil fuels and heal the damage done to our environment. It is true that in the way we currently run our economy that is not possible.We know that it’s still possible to avoid the worst impacts of climate change if we transition to renewable energy sources without delay. We know that we can contribute to a just and equitable society with dignity for all, if we build this green infrastructure as rapidly as possible” said One Sustainable Planet.

So now you know the master plan of the elites, create social-economic chaos, crash the global economy, probably blame it on the trade war, then implement MMT and transition the global economy into a new green era. Buckle up; volatility is here.

The news is important to all people because it is where we come to know new things about the world, which leads to the development of more life goals that lead to life wisdom. The news is also serves as a social connection tool, as we tend to relate to those who know about and believe the things we do. With the power of an open truth-seeking mind in hand, the individual can grow wise and the collective can prosper.