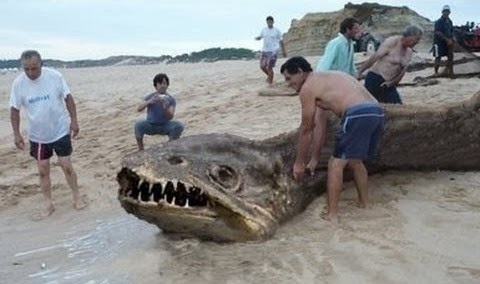 The internet is the natural home of some very unnatural creatures – fakes, frauds, and the falsely identified. Many of them attract only fleeting, transient attention before being soundly exposed and permanently discredited. However, there is also a hardcore set whose members simply refuse to die – being revived time and time again by unsuspecting novice researchers who are bewitched by their superficial strangeness and fail to realise that their faux nature has been unveiled on numerous previous occasions. So here, in no particular order, are ten of the most noteworthy (and notorious) examples, all of which I have investigated at one time or another and have either personally exposed the truth behind them or have discovered who else has done so. And where better to begin than with this extremely striking photograph? As can be seen, it portrays someone holding what appears on first sight to be a recently-dead eurypterid or sea scorpion, which, if genuine, would be an astonishing discovery, bearing in mind that the most recent confirmed specimens died out during the Permian-Triassic mass extinction approximately 252 million years ago. I have seen the following report accompanying this photo on several Facebook group and individual pages, but its earliest online appearance seems to be on the Paranormal Geeks Radio website on 13 April 2013. Here’s the report:

“In 1971 farmer Ted Litton caught this weird animal alive in his artificial pond in Lilac, TX, & got his pic in the paper. 8 hours later his farm was besieged by Army soldiers wearing decontamination suits. They drained the pond, leaving an odd, spheroid cavity in the bottom. Litton says the Army dismissed his beast as a freak of nature yet they confiscated it, promising him 5 grand (which never materialized).”

Needless to say, however, as I discovered when subjecting this photograph to a Google Image search, the reality soon proved to be very different. In fact, the eurypterid was a prop, an animatronic model, to be precise, produced for the BBC television series Sea Monsters (2003) by the award-winning special-effects design company Crawley Creatures, based in the UK. Here is a link to their website that shows this exact-same photograph:

As for the eurypterid model, it represents the Ordovician genus Megalograptus, which is one of the earliest eurypterids on record. Since the beginning of October 2013, the above photograph has been circulating widely online, appearing not only in a number of Facebook groups but also on a wide variety of websites, many of which claim that the black panther (i.e. melanistic leopard) that it depicts was recently photographed in the wild somewhere in North America. It is precisely where that has incited controversy, with a number of different States variously cited, including Oklahoma, Louisiana, Georgia, Tennessee, and Texas. Once again, however, after subjecting the photo to a Google Image search I swiftly uncovered its true provenance, which proved to be South Africa. Indeed, as I discovered from the following online article, dated 20 March 2013, which contains and originated this photo:

the animal in question is a black panther named Coal, one of two (both born in 2003) present in captivity and in the care of conservationist Kevin Richardson at the Dinokeng Nature Reserve in Gauteng, South Africa. Clearly, therefore, person(s) unknown had subsequently utilised the photo in fake reports claiming that it had been snapped in North America. This extraordinary photograph has been the subject of much online speculation since as far back as 2005, and has even featured in various YouTube videos. Lurid claims that its subjects were bona fide human-canine hybrids are widespread, and also that it is a skilfully-produced Photoshop creation. In reality, neither of these is correct, because what it really is…is a very remarkable sculpture, as revealed in the following link:

As explained there, the sculpture is entitled ‘The Young Family’, and was created by Australian artist Patricia Piccinini in 2002. It was manufactured from silicone, polyurethane, leather, plywood, and human hair, measures 80 x 150 x 110 cm, and is part of a larger work entitled ‘We Are Family’. but it has been circulating online in similar accounts for quite a while prior to that (I have found web reports of it dating back as far as August 2012). The article claims that this mega-tortoise had been discovered in a Brazilian river in 1892, but was around 529 years old. As anyone familiar with Japanese ‘monster’ films would soon confirm, however, the photo is merely a still from the popular movie Gamera the Brave, produced in Japan by Kadowara Pictures in 2006 – as verified by the following French website page: Four separate photographs of alleged black lions have been circulating online for more than 2 years, and as I have documented in my books Mystery Cats of the World (1989) and Cats of Magic, Mythology, and Mystery (2012), several unconfirmed sightings of such animals have been reported from various regions of Africa, but no verified specimen has ever been documented. So what were the animals in the online photos? As I revealed in two exclusive ShukerNature investigations: (original source/copyright holder unknown to me)

Another popular, perennial subject represented online by a wide variety of fake images is the multi-hooded (and –headed) cobra. Claimed in some reports to constitute living nagas or Indian snake deities, they were, as I soon revealed in another ShukerNature investigation:

to be nothing more than clever Photoshop creations. Indeed, there is even a video on YouTube that provides a step-by-step guide on how to create your very own multi-hooded cobra ‘faux-tograph’. This very spectacular photo has incited much discussion online in recent years – which is very strange, bearing in mind that even the most cursory Google Image search will rapidly reveal that the 32-ft-long sea serpent depicted in it is in reality a very adept creation of master monster-maker Dr Takeshi Yamada. Indeed, as I revealed in the following ShukerNature article:

it is just one of many fascinating examples of so-called rogue taxidermy produced over the years by Yamada. Others include a chupacabra snail, a vampire monkey, a Mongolian death worm, a whip-tailed tree octopus, and an eight-legged spider dog! In stark contrast to Yamada’s example, this eyecatching sea serpent photograph has greatly perplexed many people (and continues to do so), judging from the contradictory claims and comments concerning it that have appeared in online discussions and even in YouTube videos. Its portrayed location has been variously stated to be a beach in Hawaii, South Australia, and the Philippines. Moreover, no-one has been able to identify the creature that the photo depicts, but some bizarre suggestions have been offered, including an oarfish – which looks nothing like it! Happily, however, this photo poses no such problems for me – because, as now exclusively revealed here on ShukerNature, I just so happen to know who created it! None other than a good friend of mine, expert monster/dinosaur model-maker Alan Friswell, as he revealed to me in October 2013:

“I drew this sea serpent in photoshop in 2009, to accompany an article that I wrote for the CFZ [Centre for Fortean Zoology] blog page.”

Evidently, therefore, it had subsequently been lifted by person(s) unknown and passed off by them as a real, unidentified creature. This is exactly how so many online cryptozoological hoaxes arise. Someone like Alan innocently creates a fictitious beast as artwork, but then other persons deliberately pass it off as a genuine animal. Indeed, this is precisely what happened with some of the black lion photos too, and also with the next case in our listing. This dramatic photograph must have sent shivers down the spine of many an arachnophobic viewer since it first appeared online more than 2 years ago. It often appeared with an account describing it as an Angolan witch spider. Here’s one version of that account:

“It’s a new spider called the Angolan witch spider. They migrated from South America [very odd, since Angola is in Africa!]. They primarily eat dogs and cats. In Texas this abnormally large spider was found on the side of this home. It took several gun shots to kill it.”

When I first saw the photo a year or so ago, I readily identified its subject as a wolf spider, albeit one of wholly implausible size. And sure enough, a little online detective work on my part soon traced the truth behind the terror, as fully documented in the following website account:

It reveals that the photograph was produced via Photoshop as a joke by artist-musician Paul Santa Maria, who uploaded it onto his Facebook page, where it remained for just a few hours before he took it down again. But that was still sufficient time for it to be copied by someone onto their own page, from where it soon went viral. The bogus account of it being an Angolan witch spider was attached to it by person(s) unknown – and the rest, as they say, is history. (copyright holder unknown to me)

A year ago, several correspondents alerted me to the above photograph and an accompanying report, circulating on Facebook and elsewhere online, concerning what was claimed to be a rare but remarkable species of owl. It is known as the rainbow owl on account of its gaudy, multicoloured plumage, and according to the report it is native to the USA and China (an oddly discontinuous zoogeographical distribution, to say the least!) but was hunted into near-extinction during the early 20th Century due to coveters of its beautiful feathers. Moreover, it has an unusually melodious call, and is so attracted to music and human singing that researchers seeking it in the field know that they will greatly increase their chances of finding specimens if they bring along a portable stereo. The author of this intriguing report was one Dr Claudia Weatherfield of the University of Toldeo.

Needless to say, as someone with a longstanding ornithological interest yet who had no prior knowledge whatsoever of any such species, I was instantly suspicious. And rightly so, as it turned out, because some online investigations soon led me to the following webpages contained on two websites devoted to exposing hoaxes, and which fully justified my concern:

They revealed that there is no University of Toldeo; nor any Claudia Weatherfield working even at the similarly-named University of Toledo. The photograph was clearly a computer-modified version of some other image, and sure enough the original photo proved to be of a barred owl Strix varia – a common North American species unadorned by any rainbow-hued plumage.

Who knows – perhaps now, finally, all of these tenacious phoneys will be laid to rest forever…but with their exceptional history and capacity for resurrection, I wouldn’t bet on it! In this article:fakes, frauds, unnatural creatures