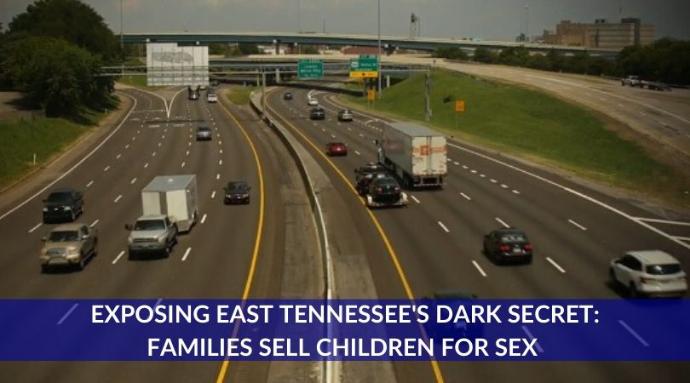 (Amanda Hara) An alarming epidemic plagues East Tennessee, but few fully understand the gravity or magnitude of the situation.

In the simplest of terms, children, some as young as three years old, have been sold for sex by their own parents and family members.

Adults, many with children of their own, have also fallen victim to human trafficking.

Experts identify the most vulnerable human trafficking victims as children in foster care or group homes, children or adults with a history of physical or sexual abuse, runaways, people with special needs, and anyone with a weakness or vulnerability that can be exposed or exploited.

“Traffickers promise a high-paying job, a loving relationship, or new and exciting opportunities and then use physical and psychological violence to control them,” said the National Human Trafficking Hotline.

As one of the region’s darkest secrets bubbles just below the surface, the Community Coalition Against Human Trafficking answers with a swift and focused attack.

The coalition, which serves all areas of upper East Tennessee, offers a variety of services to help communities identify and respond to human trafficking.

One program pairs mentors like Tamara Klauer with survivors like a woman identified only as ‘M.’ Both started as partners in survival but quickly grew as friends.

When WVLT News Anchor Amanda Hara first met Tamara, she was sifting through old memories, packing up little treasures from the past, and preparing to sell her West Knoxville home and move to Chicago.

As Tamara waited for crews to arrive and begin the moving process, M was already moving Tamara’s heart with a letter of gratitude.

“Dear Tamara, You’re going to make me cry that you’re moving away. My life is better for knowing you and counting you a dear friend,” Tamara read. “It seems like I’ve known you a long time, which is a good thing since the longest I’ve known anyone is four years, the anniversary of our rescue.”

M escaped a lifetime of trafficking, sold by her own family for sex. She found refuge in Knoxville, in the coalition, and in Tamara.

“You can’t wrap your head around it; you can’t even imagine what would lead someone to do that. It’s just pure evil … When you think of a survivor you think of someone who’s young. She’s a mom, she’s older than me. She has a son who’s a freshman in high school, she has an older daughter. This is not some kid. I think that is often surprising that it’s not just a 14- or 15-year-old girl,” Tamara explained.

The profile of a human trafficking survivor and victim is often misunderstood. Not just their age, but how they come to find themselves being sold for sex.

It’s true, Knoxville’s interstates provide traffickers a direct route from southern states to the north. But experts say the convenient infrastructure that brings people to East Tennessee isn’t the only culprit.

Family members, fueled by drug addiction, are selling children for sex straight from their East Tennessee homes. This chilling scenario makes up an alarming amount of the coalition’s cases.

“It happened to grandma, it happened to mom, and it’s happening to the daughter because that’s how families got by – that’s how they survived,” explained Kate Trudell, Executive Director of the Community Coalition Against Human Trafficking.

Furthermore, it’s happening far more often than most of East Tennessee realizes. Trudell said, “Our state really needs to digest the reality that trafficking does happen. We are seeing more referrals year to year than ever before, and that’s because there’s more trafficking than there ever has been.”

The coalition serves 30 to 40 clients every month, some as young as toddlers, many of them living in a safe house which keeps its location private to protect survivors.

Trudell said the uptick in clients can be attributed to improved detection and reporting of cases.

For Trudell, every story is one that sticks. “A teenager couldn’t understand I didn’t want anything from them. They were so used to relationships being a transaction they just could not comprehend that wasn’t our role, we were simply there to make sure they were okay.

The coalition says the process of healing can often take a lifetime and include setbacks and milestones that require consistent support. CCAHT provides clients and survivors with emergency shelter, legal aid, transportation, case management, medical care, therapy, workforce development, and so much more.

Trudell said love is the most important, “There is nothing they can do that will make us not love them because that’s what they want to feel like there’s someone on earth that will love us no matter what, and many of them have never had that before.”

There are several ways to identify a victim of human trafficking. Trudell said to watch for big changes in personality and behavior, sudden expensive belongings that aren’t easily explained, and sudden drug or alcohol use.

While the general public may misperceive human trafficking, so do some law enforcement officers. There’s a criminal justice component to the epidemic that muddies the waters. Trudell said oftentimes law enforcement officers mistake a victim for a prostitute and file criminal charges that can render long lasting negative effects and criminalization of a victim.

Founded in 2010, CCAHT has served nearly 400 survivors across East Tennessee. It prides itself as being the only agency in the region dedicated to specialized trafficking services with safe shelter.

In 2018, Tennessee was ranked first in the country for its counter human trafficking legislation, according to Shared Hope International. CCAHT credited its partnership with the TBI, the Tennessee Anti-Slavery Alliance and countless other groups, for achieving the ranking.

If you or someone you know is in trouble, please call the national or state human trafficking hotline number:

Advertisement. Scroll to continue reading.
In this article:CCAHT, human trafficking