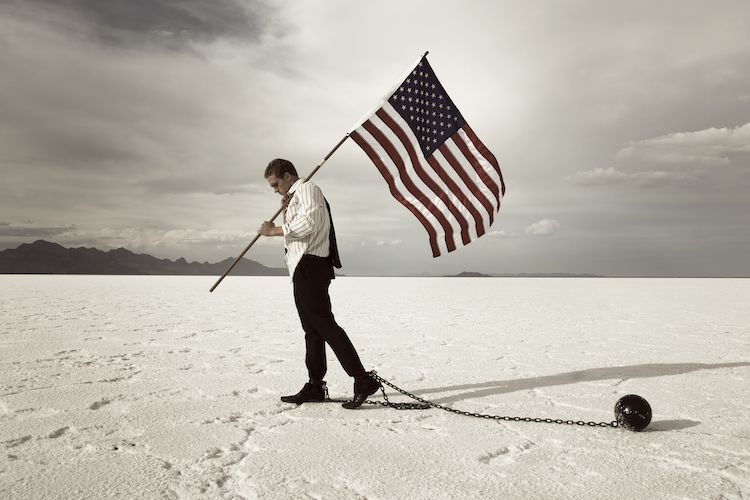 Look around in this fancy land called the U.S. and you’ll get the impression that people are just rolling in dough. They got fabulous new cars, expensive houses loaded up with imported goods, the latest smart phones, designer wardrobes, and they’re never about to turn down a good time.

But it’s all an illusion. It’s fake.

In reality, 80% of Americans are in debt and living paycheck to paycheck. Which means most of us are broke, and almost nobody owns anything at all. All that great stuff you see all around isn’t true prosperity, it’s owned by banks and it all serves as chains in a modern form of slavery.

Americans owe over $1 trillion on just their cars, another $1 trillion in household credit card debt,  $1.5 trillion in federally insured student loan debt, $8.8 trillion in mortgage debt, and all the while 40% of U.S. households are paying down medical debt. To add insult to all this injury, the national debt is now over $22 trillion, and growing 36% faster than the economy.

Debt slavery is the new normal, and it’s no accident.

We’re part of an economic and monetary system built on debt, and our culture has been warped by decades of scientifically minded marketing, advertising and consumer programming, and our cities and communities have been designed and organized for shopping, not for sharing and communing. Strip malls and big box stores have replaced the town square.

It is what it is, and it’s not going away any time soon, but the personal consequences of chronically being in debt are severe.

There’s the stress and worry of it all, and what that does to your health. There are the lost dreams and wishes unfulfilled.  The exorbitant and crushing bank fees, penalties, and high interest rates, backed up by collections agencies and organized harassment. The damage it does to marriages and the broken homes, and perhaps most insidious, there’s the spiritual malaise of being a slave.

But you can escape. Anyone can. I mean, to be honest, you’re not going to escape the disaster of government debt, because as individuals we have no control over what the lunatics and crooks in government do. That’s another conversation, but you don’t have to tolerate a life as a slave to personal debt. You don’t have to live forever with student loans, car payments and mountains of credit card debt.

What’s at stake here is you freedom. That is, the quality of your life in the short time you get to be alive here on earth.

Financial literacy is not something most of us learn in school, and so very few of us have had positive examples of this in our lives, but there is a system to get out of debt that works very well, and there is a network of support that can teach you how, get you inspired, and keep you motivated as you walk your own path to freedom.

Having found myself in deeply debt a couple of times in life, and then working my way to being 100% debt free, I can tell you that there is really no feeling quite as joyful as being free.

The method I have found that works the best to achieve this is referred to as the ‘debt snowball’ and is outlined in the book, The Total Money Makeover: A Proven Plan for Financial Fitness by Dave Ramsey. I was about to spell it out for you when I found an exceptional breakdown of it by Daisy Luther of the excellent blog, The Organic Prepper. Check it out, as it is the quickest way to get yourself out of debt.

Dave recommends something called “the Snowball Method” for repaying debt quickly. Imagine a snowball at the top of a hill.  As you roll the snowball, you pick up more snow, and the snowball gets bigger. By the time it’s at the bottom of the hill, it’s huge. You can do the same thing with debt by paying off the smallest bill first, then applying what you’d normally pay on that lowest bill to the next bill. Continue adding the minimum payment for each paid-off bill to the next largest one until all of your debt is repaid.

This method assumes you have enough money coming in to make your basic payments, plus a little bit extra. If you’re in a situation in which you truly do not have enough money to pay your bills, this article will be more appropriate.

I have personally used this technique to attack debt, with a few tweaks of my own.

Here’s a more detailed explanation of how the Snowball Method works.

1.) Write down every penny you owe.  This is tough love, and it’s painful, but go through all your bills and write down your totals. Most people find that the total is higher than they expected. The good news is, if you are truly committed to paying off your debt, this is the highest that it will be.

2.) Organize the bills from smallest to largest amounts.  This may not seem like it makes much sense, but trust me…there’s a method to the madness here.

3.) Write another list of the minimum payments for each bill. This is your baseline of payments each month. For the sake of ease, let’s say there are ten bills with a total of $750 in monthly minimum payments.

4.) Now, figure out the rest of your budget. Once you pay your rent/mortgage, buy groceries, and pay the utility bills, how much money do you have on top of your $750 a month?  For this exercise, we’ll say you have an extra hundred dollars.

6.) Now, you’re going to start putting all of your extra money on the lowest bill each month. So, the first month, you make all of your minimum payments, put $80 extra on the Victoria’s Secret bill to pay it off, and then apply your leftover $20 to the JC Penney’s bill.

7.) The following month, take the minimum payment from Victoria’s Secret, the minimum from JC Penney’s, and your extra $100 to pay off your JC Penney’s debt. Keep in mind that due to interest, your other debts will not change much at all if you are only making the minimum payment. For the sake of this exercise, we’re living them as they are to demonstrate that.

8.) The month after that, you’ll combine all of your previous minimum payments with your extra hundred dollars, plus the minimum for Target for a total of $185 against that bill. It will take you two months of snowballing to pay this off.

And that’s how you pay off consumer debt quickly.

Being debt free as an individual is one of the most important things you can do for your happiness, security and for your family. Since pretty much everyone you know is doing the ‘normal’ thing of being a debt slave in an overly consumeristic culture, do yourself a favor and check out The Dave Ramsey Show and take back your freedom from the banks and credit card companies.

This article (Everyone is Broke But YOU Don’t Have to Be a Debt Slave Any Longer) was originally created and published by Waking Times and is published here under a Creative Commons license with attribution to Dylan Charles and WakingTimes.com. It may be re-posted freely with proper attribution, author bio, and this copyright statement.

In this article:monetary system, USA debt 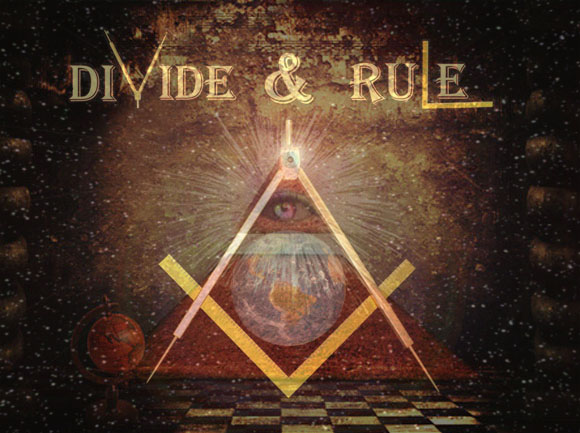 Is Secession Healthy Decentralization or Divide-and-Rule?

If the centralization of power is one of the biggest threats to human freedom, wouldn’t decentralization be considered the solution? Sounds reasonable, but some...