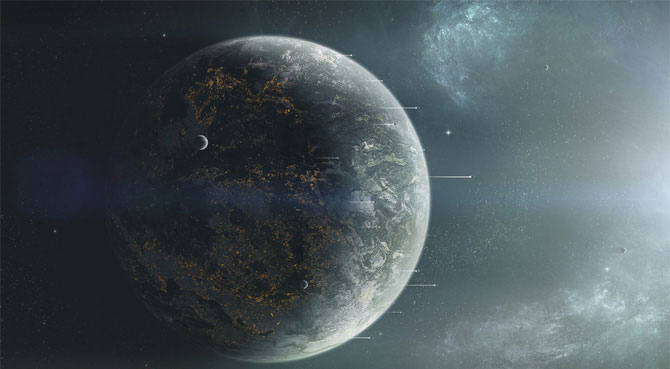 During the Starship Congress last week in Dallas, Texas, discussions focused on the myriad of topics associated with humans pushing into space and, ultimately, becoming an interstellar civilization. It quickly became apparent that if you think on a large enough scale, over a vast enough time frame, pushing humanity deeper into the galaxy is not a sci-fi notion, it’s an evolutionary imperative.

But let us assume for a minute that we will overcome the huge technological challenges of propelling starships to neighboring star systems and begin a new age of galactic colonization. Let us also assume that the profound question “Are we alone?” will be answered. We will have clawed our way to the stars to find that life is simply a chemical complication and, given the correct conditions, biology is possible anywhere.

As we come face-to-face with our extraterrestrial neighbors, what would — indeed, what should — we do?

In a fascinating panel discussion on Friday (Aug. 16) at the Starship Congress, representatives from interstellar organizations weighed in on the ethical implications of making “first contact” with aliens — whether aliens are considered “intelligent” (or at least appear to be sentient) or whether they are in the dawn of their evolution as single-celled microorganisms.

The construction of some kind of ethical framework would be necessary and comparisons were made with Star Trek’s “Prime Directive” that is used in the fictional universe to prevent cultural interference between the advanced Federation and other burgeoning alien civilizations. How much would such a framework borrow from science fiction? Would it even be needed?

Les Johnson, chair of the Tennessee Valley Interstellar Workshop and deputy manager for NASA’s Advanced Concepts Office at the George C. Marshall Space Flight Center in Huntsville, Alabama, outlined some logical criteria for our interstellar descendents to refer to should they stumble upon any extraterrestrial life.

The first criteria should be “learn all you can learn before risking anything,” he said. The second should be “if it seems to be Alive leave it Alone!” And the third: “avoid bringing samples to the homeworld because I don’t want to bet on it being 100 percent incompatible with our ecosystem.”

The third criteria was countered by Jim Benford, president of Microwave Sciences Inc. and co-author of “Starship Century,” arguing that perhaps we shouldn’t expend too much concern for some alien microbe “infecting” us or harming our biology in some way. Instead, Benford argued, in the event of encountering an alien world, it is inevitable that we would want to set up a manned outpost to carry out scientific investigations. Should we interact with extraterrestrial biology, we will be so unalike (biologically speaking) that it is highly improbable that we will be negatively impacted.

Drawing examples from terrestrial nature, Johnson pointed out that invasive species introduced to vulnerable regions have caused untold damage. Lacking predators or environmental limitations, could a newly-introduced alien species to our environment take over and threaten our survival? Other panelists pointed out that it might not be such a great idea to bring extraterrestrial biology back to Earth, just in case.

Kelvin Long, co-founder of the UK-based Institute for Interstellar Studies, supported the need for interstellar guidelines in regard to extraterrestrial contact, but also pointed out that these moral guidelines will likely be interpreted in different ways by different individuals throughout a hypothetical sprawling interstellar civilization. However, by that stage in our evolution, Earth-analog planets would likely be less important to our survival — we would have become more space dwellers than planet-dwellers. Life-giving planets would therefore be more of scientific interest than somewhere for us to simply colonize.

“It is neither a case of moral respect or survival of the fittest but of the fact that we will have evolved as a society which does not need to compete (with indigenous lifeforms),” said Long.

Marc Millis, founder of the Tau Zero Foundation, was realistic about human nature in space. Despite obviously evolving into a grand interstellar race capable of communicating with other forms of life, he also agreed that any ethical guideline will be interpreted in different ways and it will be highly likely that mistakes will happen along the way. “There will certainly be some bad events happen and they will probably be unavoidable,” he said.

Richard Obousy, president and co-founder of Icarus Interstellar, was blunt with his assessment of humanity’s future in interstellar space, saying, “I’m pro-human being.”

Obousy agreed that we should propagate into the galaxy with solid ethical principals “and we should treat other things that we discover with compassion,” but ultimately he wants what’s best for humans; using a planet’s resources shouldn’t be stifled merely by the presence of basic lifeforms. However, should the alien life be in some way sentient, greater care should be taken and contact with the species should be considered only if absolutely necessary.

Interestingly, financial economist and “Alpha Centauri Award” winner Armen Papazian, countered that our politics and history have skewed our concept of colonization and exploration.

“There’s a linguistic issue here and a historic issue,” said Papazian. “Much of what we understand in our psyche when we say ‘colonization’ in the context of a political map has been so charged with specific historic events that ‘colonization’ means a lot of different things around the planet.”

Ultimately, Papazian argued, we need to understand what we are exploring the galaxy for, and if we approach it with an enlightened attitude, we should be able to explore for the right reasons. “Are we going to embrace or are we going to utilize? Are we trying to export our scarcity economics? Or are we trying to enjoy an abundant cosmos?” he asked.

Finally, Joe Ritter, optics engineer at the University of Hawaii, approached the question from personal experience. As a resident on Maui, invasive species have caused many issues for the small island, and what is sacred to the islanders wouldn’t necessarily be understood by outsiders. He therefore doubted that humans will have the ability to not interfere with alien life (and their environment) regardless of whether they are sentient or not.

“In my opinion, if we’re enlightened, we’ll leave it alone … Will humans do that? Probably not,” concluded Ritter.

The question as to whether we’ll meet intelligent extraterrestrial life forms at all was the topic of much debate throughout the Starship Congress. After all, the sheer luck of bumping into a civilization at the similar stage of development as ourselves will be vanishingly small. Perhaps when we make first contact, we won’t even be aware — the alien life we encounter may have technologies that we don’t even recognize as technology. Or we may sail the vast expanses between the stars never to meet anything even vaguely sentient. But in a universe of seemingly boundless opportunity, it seems unlikely that, as we truly become interstellar, we’ll never encounter another example of biology anywhere in the galaxy. But for now, that’s pure conjecture; the only evidence for life is here on Earth.

Regardless, it would be nice to see if there are any living beings out there. Perhaps we should build a starship to find out.