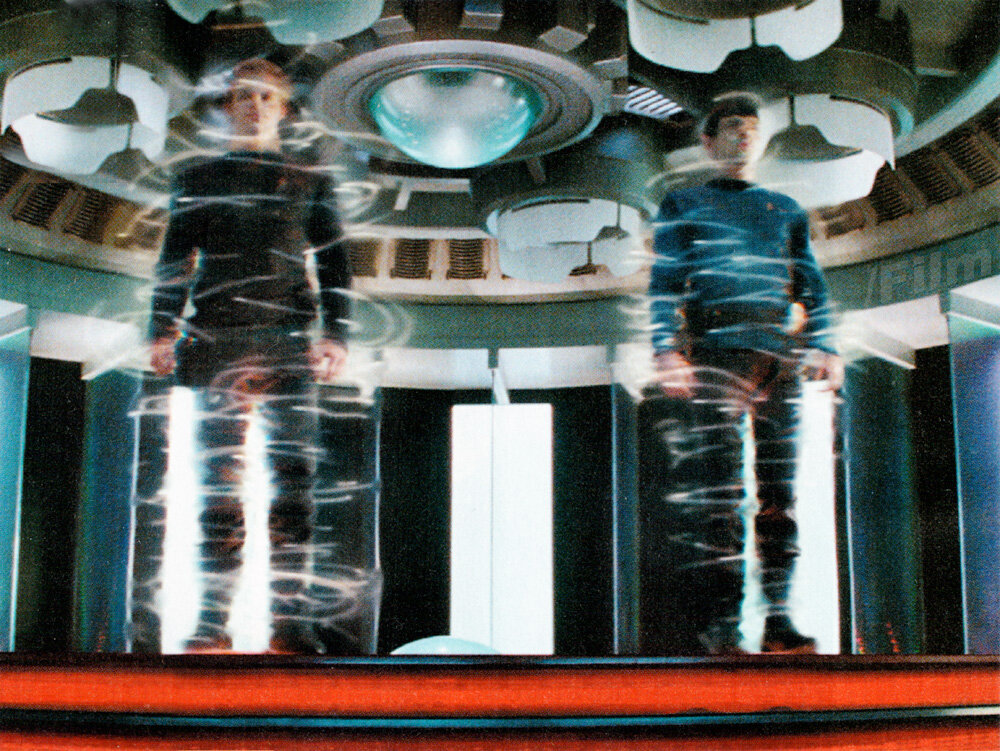 Teleportation in the Star Trek universe

Science fiction heroes sometimes find themselves trapped in other dimensions. The same usually happens with the heroes of sci-fi television series such as “The Twilight Zone”, “Star Trek”, “Millennium”, “The X-Files”, “Psi Factor” and others. Many people have an intuitive idea of ​​what the term means, but it is difficult to define.

You cannot take a trip to another dimension, because the other dimensions are not separated from ours by any distance. Other dimensions, if they exist, surround us. They cannot be seen, heard, perceived or measured, unless you leave this dimension and enter another. In ‘The Strange Mysteries of Time and Space’, English writer and collector of entertaining and unexplained facts, Harold T. Wilkins writes:

“There is, so to speak, a” hole in the wall “or, in order to expand the metaphor, funnels in matter through which certain people of all social classes and ranks, animals and objects, willy-nilly and completely unexpectedly, can pass and from which there is or is not a path back to the world from where they were “teleported”.

Teleportation. This term was coined by Charles Fort in order to describe the phenomenon of transferring objects from one place to another without the apparent use or participation of physical force.

Over the centuries, a large amount of material has been collected on this issue, telling about how people, other living beings and objects are sometimes transported over long distances, as they say, in the blink of an eye.

We want to talk about an incident described in Spanish sources, moreover, legal ones, which were found by the astronomer and writer Maurice K. Jessup, one of the first who began to study unidentified flying objects.

The name of MK Jessup is inextricably linked with the Philadelphia Experiment. After receiving an anonymous letter from a man claiming to be a witness to the tragedy, Jessup began to investigate in earnest.

Some time later, he was found dead at the wheel of a car, the engine of which was idling, and a hose on the muffler was inserted into the cab. The death of Jessup was considered a suicide by alcohol: a large dose of alcohol was found in his blood, although his friends later claimed that Jessup did not drink alcohol, because he was taking potent medications. Controversy over the death of M.K. Jessup continues to this day.

So about the incident described in Spanish sources, moreover, legal ones, which were found by the astronomer and writer Maurice K. Jessup, one of the first who began to study unidentified flying objects.

We are talking about the trial of the Inquisition over a soldier who unexpectedly appeared on October 25, 1593 in the city of Mexico City, although his regiment was stationed 9 thousand miles (14 thousand kilometers) from Mexico – in the Philippines.

He could only report that a few moments before his arrival in Mexico City, he was on guard duty at the palace of the governor in Manila, who had just been treacherously killed.

How he himself appeared in Mexico City, the soldier had no idea. A few months later, people who arrived by ship from the Philippines confirmed the news of the murder of the governor and other details of the soldier’s story.

In his 1962 book ‘The Silent Road’, the black magician, the late Major Wellesley Tudor Pole, recounted a teleportation incident that happened to him:

“In December 1952, I got off the train at a commuter station about a mile and a half from my home in Sussex. The train from London arrived late, the bus had already left, and there was no taxi. The rain continued pouring down. It was 5.59 pm. At 6 o’clock they were supposed to call me from abroad, and it was a very important call for me. The situation seemed hopeless. And what was really bad was that the telephone at the station did not work, because there was some damage on the line.

Desperate, I sat down on a bench in the waiting room and began comparing the time on my clock and the station clock. Considering that at the station the clock always runs a couple of minutes ahead, I decided that the exact time was 17 hours 57 minutes, that is, in other words, there were still three minutes left until 18.00.

What happened next, I cannot explain. When I came to, I was standing in the lobby of my house, which was a good 20 minutes’ walk away. At this time, the clock began striking six. The phone rang a minute. After I finished my conversation, I realized that something very strange had happened, and then, to my great surprise, I saw that my shoes were dry, there was no dirt on them and my clothes were also completely dry.”

If it could happen so spontaneously, then why can’t teleportation happen by will?

Here witches, spiritualists, or, for example, the following case, which caused ridicule at one time, come to mind.

The medium Mrs. Guppy, who weighed about 100 kilograms, was instantly transferred on June 3, 1871 from her home in Highbury, London, to a house on Conduit Street three miles from the first. Moreover, she landed in a negligee right on the table at the time of the seance.

Over the past decades, there have been many reports of involuntary teleportation, mainly related to UFOs.

Many of these are recounted in John Keel’s book ‘Our Haunted Planet’ (1971). For example, Geraldo Vidal in May 1968 was driving with his wife in the Bahia Blanca area of ​​Argentina. Suddenly they found themselves in Mexico, thousands of miles from this place. They had no idea where they were or how they got here. The only sign that something had happened to them was the scorched body of their car.

Another case, described by Jerome Clark and Loren Coleman in the book “The Unidentified: Notes Toward Solving the UFO Mystery”, occurred with 24-year-old Jose Antonio da Silva, who on May 9, 1969 was near the city of Vitoria in Brazil in a state of shock, in torn clothes, at a distance of 500 miles (800 kilometers ) from Bebedor, where he was four days ago.

His story that he was captured by four feet tall creatures (120 centimeters), transported to another planet, and then returned to Earth sounded unrealistic, but this case, like many other similar incidents, was thoroughly investigated. After that there was no doubt that da Silva believed in what he was talking about.

An important feature of all cases of teleportation associated with UFOs is the return of the victim in a state of shock, trance and semi-amnesia, which fully coincides with the stories in which it was about the abductions of people by fairies in earlier times.

As you can see, some cases of teleportation occurred spontaneously, without obvious outside interference, while others, on the contrary, were clearly controlled, albeit unconsciously, by the will of certain people with a high nervous organization.

In the Middle Ages, no one doubted the existence of occult forces

The further we look into the depths of the centuries, in the time of witches and sorcerers, up to the all-powerful magicians of the ancient civilization, the more we get confirmation of the alleged cases of controlled teleportation and magical flights.

Although this phenomenon is not recognized by science, it nevertheless happens every now and then, but instead of flying mystics and the transport of multi-ton stone columns through the air, we hear about flying cars or about an incomprehensible couple who find themselves in Mexico at the time when they were supposed to be in Argentina.

Every day at exactly four o’clock on the slope of one of the hills it starts to rain. After an hour, it stops.

This happens daily with the regularity of the clockwork. But the most incomprehensible thing is that it happens with a completely clear sky.

There is no cloud, but it is raining.

Scientists invited from Lisbon could only confirm, but not explain, or even somehow comment on this strange and regularly recurring phenomenon.

We are attracted by the unknown: how to explain hundreds and thousands of cases when people disappeared for no reason, and then reappeared, but in a different place and unexpectedly for themselves!

Undoubtedly, a qualitative breakthrough in human understanding of time travel is coming soon, it is inevitable and will certainly become one of the greatest discoveries of mankind.

In this article:Invisible Powers, Mysterious Phenomena