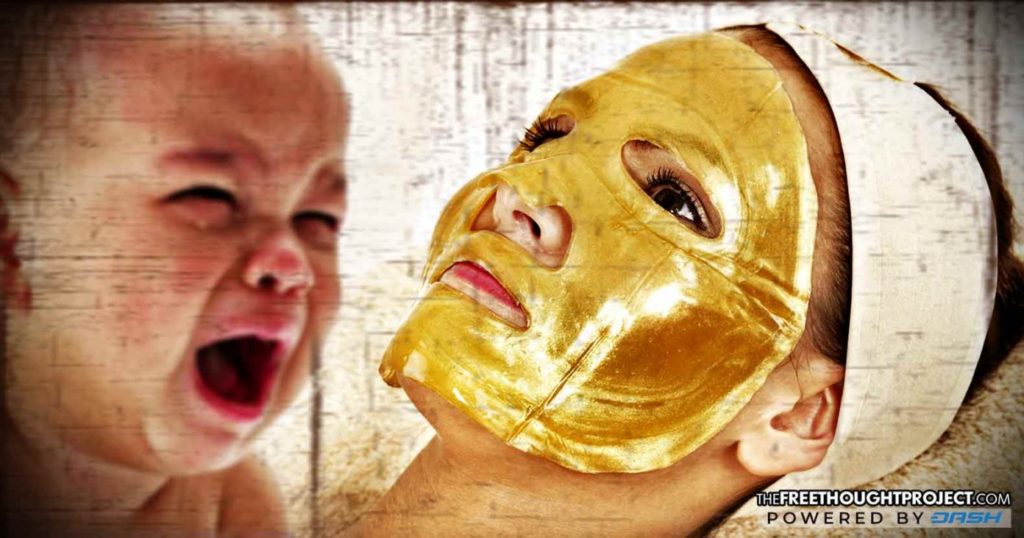 (Matt Agorist) A new trend is sweeping Hollywood’e elite by storm which involves using a serum derived from the foreskin of babies as a means of looking younger.

Cate Blanchett and Sandra Bullock have made headlines recently by revealing their ‘secret’ to maintaining young and healthy looking skin. The duo have nicknamed the procedure the ‘Penis Facial’ due to the fact that the serum used in the process is derived from the foreskin of Korean babies.

Known officially as the Hollywood EGF (Epidermal Growth Factor) Facial, so-called penis facials have earned the nickname not just because the process smells like sperm, but because it requires a serum derived from the cells of the foreskin of newborn babies.

What’s more is that not only are they publicly admitting to the use of mutilated baby penis parts to look younger, but they are celebrating it. On Thursday, Bullock went on The Ellen DeGeneres Show to explain why she’s so happy about this treatment and to explain the reason it has been called the ‘Penis Facial.’

As if to imply babies across an ocean don’t matter as much as babies here, the serum, Bullock tells DeGeneres, is “an extraction from a piece of skin that came from a young person far, far away.”

However, Ellen bluntly pointed out, that it is indeed derived from the “foreskin from a Korean baby.”

In an interview in Vogue magazine last month, Blanchett raved about the ‘Penis Facial’ too, as she callously admitted that she doesn’t even know what it is.

“Sandra Bullock and I saw this facialist in New York, Georgia Louise, and she gives what we call the penis facial,” Blanchett told Vogue Australia. “It’s something — I don’t know what it is, or whether it’s just cause it smells a bit like sperm — there’s some enzyme in it so Sandy refers to it as the penis facial.”

In an interview with People Magazine, the inventor of the treatment, Georgia Louise explains, “EGF is derived from the progenitor cells of the human fibroblast taken from Korean newborn baby foreskin – which helps to generate collagen and elastin.”

Bullock jokingly explained that she loves the treatment and pointed out the obvious.

“It’s not like I’m lying there with little pieces all over my face,” she laughs. “I call it the penis facial. And I think when you see how good it is to your face, you too will run to your local facialist and say, ‘give me the penis.’”

“It started last year when Sandra Bullock was filming in NYC and came to see me for a deep cleansing and long-lasting facial glow,” Louise explains. “Within weeks her make-up artist, Whitney, and cast mates wanted to know what was the cause of her amazing, long-lasting glowing skin … and from that moment onwards the Hollywood EGF Facial was born!”

Aside from the depravity of laughing about and celebrating using penis skin from babies to look younger, the science behind the procedure—consisting of a handful of studies including one in 2007, another in 2009, and this one in 2016—is funded and researched by the people in the skin care industry which means the little bit of perceived benefit is likely just an act of biased science.

In spite of the lack of evidence that this treatment works, foreskincare use is on the rise.

“I have text threads which would blow your mind from celebs, asking for the ‘penis treatment’ all the time now!” Louise explained.

Those stars seeking this penis facial treatment publicly include Katy Perry, Alexander Wang, and Anna Wintour. “Georgia is a miracle worker,” Emma Stone is quoted on their client list. “The best facialist in the world!” Gucci Westman raved.

Although the process involves cloning the cells of the foreskin to reproduce the serum, the fact that it relies on a process like circumcision is brutally inhumane and laughing about it like it’s some trendy new fad speaks to the nature of the Hollywood elite.

For those who may be unaware, circumcision is an unnecessary procedure that is painful and can lead to complications, including death. Not a single organization in the world currently recommends it, yet it continues to happen based on societal norms stemming back to utterly horrifying religious practices.

When a baby is circumcised, an anesthesia cannot be used because of the dangers of the interactions in an infant. So, they are strapped to a table while screaming out in agony as the most sensitive part of the male anatomy is barbarically removed from their body.

As Americans cheer on the wars in the Middle East lambasting the few areas in the Muslim community who carry out the barbaric act of female circumcision, the American elite are using the foreskin from male babies as a means of looking younger—and they’re loving it.

Now, this horrific process has become so mainstream that celebrities are bragging about using the products derived from the procedure. Just to put this into perspective, imagine for a moment that celebrities began bragging about rubbing serum on their faces derived from female circumcision, do you really think that they’d be laughing? Probably not.

Matt Agorist is an honorably discharged veteran of the USMC and former intelligence operator directly tasked by the NSA. This prior experience gives him unique insight into the world of government corruption and the American police state. Agorist has been an independent journalist for over a decade and has been featured on mainstream networks around the world. Agorist is also the Editor at Large at the Free Thought Project. Follow @MattAgorist on Twitter, Steemit, and now on Facebook.

In this article:Hollywood’e elite, Penis Facial