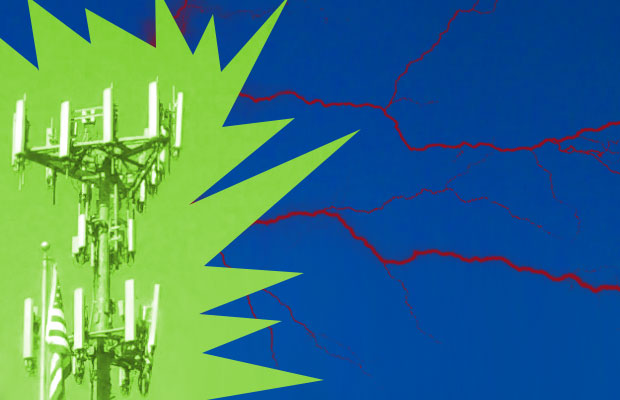 As revealed in the study of quantum physics, the world around us is comprised of energy. It is not something we can touch or see with our human eyes. Yet, energy patterns and vibrations surrounding us and moving through us have a profound effect on our physical bodies.

Author Daniel Reid, who has written numerous books and magazine articles on various aspects of Asian self-health and self-healing practices, offers an interesting perspective in his article Electro-magnetic Energy Pollution, which discusses the effects that electromagnetic energy pollution has on our energetic and physical bodies:

In traditional medicine, the human energy system (HES) serves as a functional bridge between body and mind, and energy is the therapeutic medium that heal and balances both physical disease and mental malaise. Today, the HES has come under intensive attack from an entirely new phenomenon which the human system has never before had to face. This new threat to human health and longevity is the rapidly growing hazard of electromagnetic ‘energy pollution.’

Energy pollution is made up of artificial electromagnetic fields (EMF) caused by artificially-generated radio frequencies, electrical power lines and transformers, smart-meters, home appliances such as microwaves and electric stoves, fluorescent lights, electrical devices such as electric razors, computers and cell phones, and many other every-day items.

These invisible but highly reactive energy waves and artificial EMF…have become the big unknown factor in all the vital equations of human health, and they constitute the hidden cause in many common human ailments, from cancer to schizophrenia. This pollution of our energy environment is even more hazardous to the human system than chemical and ecological pollution, and it calls for an entirely new approach to healing, an approach that effectively protects the HES from distortion by artificial energies and EMF and cures the conditions they cause.

The human body is now routinely bombarded with all types of pollutants, from toxic chemicals, to biochemical pollutions such as GMOs, to unnatural energy fields. This affects the tissues, bodily fluids and the bloodstream, and often results in conditions such as acidosis, which, in turn, is believed to causally trigger many other illnesses such as diabetes, high blood pressure, cancer, arthritis and even mental disorders.

Despite the proven risk of exposure to artificial EMF over 3 mG [3 milligaus], very few countries have legislated legal limits to the EMF produced by machines and appliances at home and in offices and factories. In Sweden, there are strict laws prohibiting EMF exposure to humans above 2.5 mG, and in Russia, where this hazard has been extensively researched, the limit is an even safer 1.5 mG. Compare that with the legal limit of 1,000-5,000 mG exposure to EMF for people in homes, offices, and schools in Australia, and similar hazardous levels in America, Canada, and the UK, as well as most of Asia. Small wonder that one in three people today develop some form of cancer, and that brain disorders and mental malaise have become rampant throughout the world.”

One of the most common culprits of EMF pollution are wireless cell phones, believed to be exposing human brains to unsafe levels of microwave radiation, resulting in what one might call “microwaving of the brain.”

The human body, particularly the electrically active brain, is extremely sensitive to disruption from the high-frequency electromagnetic radiation produced by cell phones and cell phone transmission towers. Our brains and bodies depend on hundreds of delicately balanced, internally generated electrical impulses to conduct the vital functions of life, and these are thrown into disarray by the invasive ultra-high frequencies generated externally by cell phones and phone towers. As Blake Levitt states in his book Electromagnetic Fields, ‘When it comes to mobile phones, a worse frequency could not have been chosen for the human anatomy.’

Tests conducted by the U. S. Department of Energy found that ‘using mobile phones impairs memory and reaction times.

‘There is also a higher incidence of cardiac problems,’ states Dr. Cherry.

Dr. George Carlo…found that rare types of brain tumors have more than doubled among mobile phone users, particularly on the side of the head where they use their phones.”

Studies conducted by Dr. Peter French in Sydney, Australia, show that ‘cells are permanently damaged by mobile phone frequencies and inherited unchanged, from generation to generation.’

Professor Leif Salford stated to the Daily Mail his finding that after a two minute conversation on a mobile phone, ‘It seems that molecules such as proteins and toxins can pass out of the blood, while the phone is switched on, and enter the brain. We need to bear in mind diseases such as MS and Altzheimers, which are linked to proteins being found in the brain.’

Discouragingly, most of these studies and researchers are not being validated by global health authorities. Of course, in order to protect their interests, electronics and telecommunications industries also do not care to validate in any way the argument that electromagnetic energy emitted by electronic devices and our communications infrastructure is hazardous to human health. It is thus, up to each individual to either avoid using high-frequency electronic devices, or start using high-tech devices designed to protect the body from artificial EMF, and protect themselves in other creative ways, such as using the mysterious Orgonite.

Our scientific understanding of energy dynamics is still at a nascent stage, although several ancient cultures had designed complete holistic healing systems based on the therapeutic properties of life energy. Now, modern technology is also being used to create a new products that neutralize adverse effects of man-made EMF.

One of the most important new developments in energy medicine is the line of titanium products made by Tesla’s Innovational Technologies in Australia. These products are based on the original scientific genius of Nikola Tesla, the man who invented modern electric power systems in the early 20th century. After realizing the harm which EMF from high-voltage AC electric power lines and other electromagnetic radiation causes to human health, he developed a method to alter the atomic structure of titanium so that it becomes a transceiver of a very fine, bio-friendly energy known as ‘photon’ or ‘tachyon’ energy.

EMF neutralizing products include: phone tags, personal pendants, travel plates, computer plates, house plates, and car plates. Each type of plate is unique in its circumference, diameter, thickness, and is typically made from one of the Earth’s natural elements. Personal items are touted to significantly boost vitality and strengthen the immune system.

More about Tesla’s titanium products made by Tesla’s Innovational Technologies can be found here.