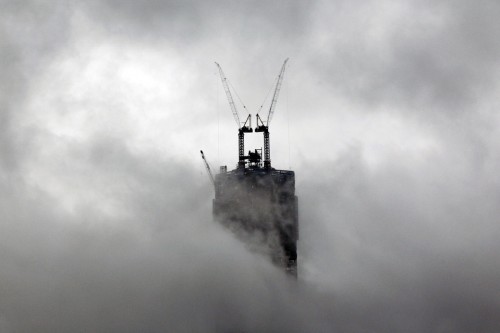 An eerie howl has been heard throughout parts of NYC and it’s keeping residents spooked and wide awake. At 3:15 a.m., a Tribeca resident recorded what he heard outside of his home.

Puzzled, residents have reported the same sounds being emitted from the towering building since first erected. One such incident was when hurricane Sandy hit the eastern seaboard last year. The strong gusts of wind blew through the One World Trade Center buildings creating an ominous sound much like those apocalyptic sounds from the sky stories.

Here’s a video from when Sandy hit NYC

A strange howling sound from the building is even keeping local Tribeca residents up at night.

The building’s 104-storey Freedom Tower is 1776-feet high (541 metres), making it the tallest building in the US. On top of the tower is a spire, which appears to be the source of the disturbing sound as wind races through its lattice-like design.

Mr Cummings, who raced outside to record the scene on a video posted to YouTube, said he has only heard the sound once since.

“At 3.15am Wednesday morning I awoke to the sound,” he said, adding that the noise was “two tones” and went on for hours.

“I couldn’t be sure what it was at first, but after a moment I realised it was the Trade Centre. Outside it was raining but the trees were calm. I can only imagine at that height the weather is different. I’m sure all of downtown hears this. It’s unmistakable and very chilling.”

The creepy, choral-like sound was first reported during Superstorm Sandy, when the building was lashed with strong winds and rain, turning the tower into a musical instrument.

In this article:Howling, NYC, One World Trade Center