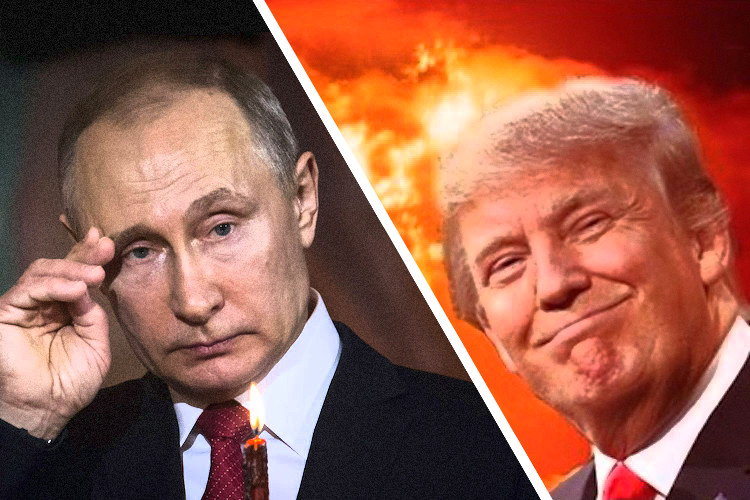 The U.S. has been attempting to enter Syria for almost five years now, and the chemical weapons pretext has been in play since the invasion of Iraq.

We seem to be in a repeat cycle. Some kind of macabre Groundhog Day where no matter how many times we manage to survive the day, we keep waking up to the same twisted scenario.

Retired General Wesley Clark told us over a decade ago of the military plan to invade Syria, and now in the Syrian theater, the drive to force Russia into retaliation against the U.S. is deadly persistent. This would undoubtedly start a global nuclear conflict. Double plus ungood.

In 2013, I wrote an article regarding the Obama administration’s threats to bomb Syria:

“With the United States government mobilizing to live up to expectations that it would eventually find justification for the bombing, destruction, and occupation of Syria, those of us who’ve overcome the fear propaganda of the security state are forced to watch in unspeakable sadness as the resources of this nation are again stolen by our geo-political chess masters. The institutions that we so faithfully support with our tax dollars are once again demonstrating their disinterest in serving us, opting instead for blood in foreign lands, off on some veiled agenda of the elites, leaving America to toil in ruin. ” [Source]

In October of 2016, in an article titled, False Flag Attack Imminent in Syria as Globalists Engineer World War III, I wrote the following:

As the U.S. continues to aid and support ISIS, Al-Nusra and other terrorist organizations in its ploy to overthrow the Assad government for the primary benefit of Israel, a false flag event signaling the beginning of a direct confrontation with Russia could come at any time. At present it looks as though the most likely scenario would be something along the lines of the USS Liberty attack, which would involve the deliberate targeting of our own forces while creating the perception of a Russian attack on U.S. or NATO components.

The situation in Syria is ripe for exactly this kind of covert, subversive tactic.  There is historical precedence to suggest that a Syrian false flag event is imminent, therefore people the world over must prepare to resist and to survive this. [Source]

Now, as the world waits to see what the fallout will be from Trump’s April 13th strikes against Syria, I’m reminded of American mystic Edgar Cayce’s prophecy about Russia somehow preventing World War III.

In October of 2015, I wrote about this prophecy:

In a series of what he called ‘World Affairs Readings,’ Cayce made many remarkable statements about the future of world finance, world leadership, collective spirituality, and interestingly the role that somehow Russia was to play as a force of right in the coming global turmoil that we see unfolding before our eyes today.

Cayce foresaw that future world crises would hinge on finance, and he pointed to Russia as being the thorn in the side of the financial powers that were organizing themselves against the good of humanity in a post WWII world.

When asked in 1932 about political and economic trends in Europe Cayce zeroed in on Russia:

Europe is as a house broken up. Some years ago there was the experience of a mighty peoples being overridden for the gratification and satisfaction of a few, irrespective of any other man’s right. That peoples are going through the experience of being born again, and is the thorn in the flesh to many a political and financial nation in Europe, in the world… Q. What is the name of that nation referred to? A. Russia! (3976-8)” [Source]

At present we are in a situation where yet another American president ignores international and domestic law to start war, and we can only hope that Russian president Vladimir Putin responds in a way that manages to again de-escalate the West’s efforts to exacerbate the conflict. For whatever reason, this seems to be Putin’s most important role at the moment.

Journalist Paul Craig Roberts explains how Russia represents the current moral footing in the region and why the Neocon infested U.S. government sees humanitarian decision-making as a path toward provocation.

“Russia is intent on avoiding a conflict, not because Russia is scared of the US military, but because Russia understands it is dealing with a government of psychopaths that are willing to destroy not only seven Muslim countries in whole or part within the past 17 years, but also the entirety of humanity. Therefore, Putin sidesteps each orchestrated confrontation and stands on international law and legal norms.

The result, however, is not what a humane person would expect. The result of Russian humaneness is to provoke more provocations from the evil that is the West.” ~Paul Craig Roberts

Sheer madness is the only thing that explains the behavior of the U.S., France and England at present. In short, we’re dealing with psychopaths who clearly want a major escalation and are crafting the perfect storm for global nuclear war.

As crazy as it sounds, it seems that Vladimir Putin does indeed have an incredibly important role in stopping World War III at the moment.

This article (Edgar Cayce May Have Been Right About Russia’s Role in Preventing World War III) was originally created and published by Waking Times and is published here under a Creative Commons license with attribution to DylanCharles and WakingTimes.com. It may be re-posted freely with proper attribution, author bio, and this copyright statement.

In this article:featured, Russia v US, ww3