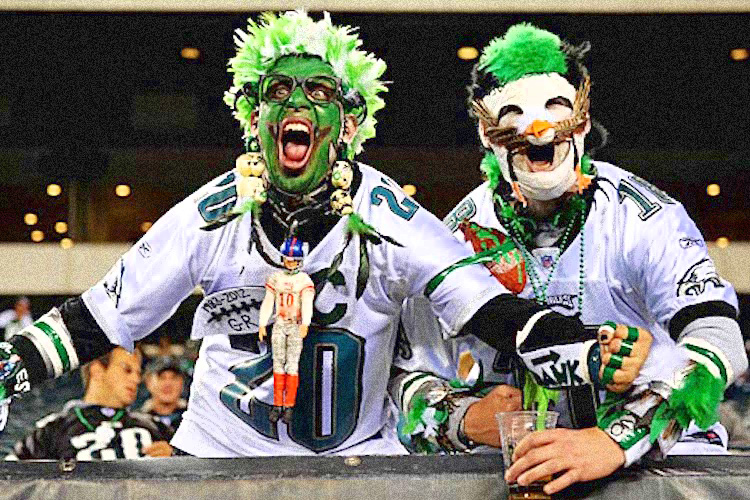 The Superbowl is coming, and although the NFL has had a rough season, it is predicted to be the biggest television event of the year. In 2017, almost 112 million people tuned in to the annual event, a full third of the population of America. It’s big business. In many ways, the dystopian nightmares of 20th century literature have become manifest in the 21st century.

Aldous Huxley foresaw a future where the populace was drugged and sedated, never able to break through the mental fog of forced medication. H.G Wells spoke of the rise of arenas and the distraction of mass sports, suggesting that this type of foolishness was anathema to a free society.

“Our Founders made no peace with this organisation of public sports. They did not spend their lives to secure for all men and women on the earth freedom, health, and leisure, in order that they might waste lives in such folly.” ~H.G. Wells, A Modern Utopia

In Orwell’s 1984, there were two populations living side-by-side, those who’d joined ‘the party,’ and those who remained outside the protective womb of the State… the Proles. The thing with the proles, though, was that they had to be kept pacified, because their sheer numbers were enough to throw off the yoke of state control, but only if they were to unite and organize.

In spite of their numbers, however, the State had no reason to fear them, for they were indeed well pacified, and as Orwell describes, many of the tools used to control these masses have certainly come into fruition today.

“Heavy physical work, the care of home and children, petty quarrels with neighbors, films, football, beer, and above all, gambling filled up the horizon of their minds. To keep them in control was not difficult…. All that was required of them was a primitive patriotism which could be appealed to whenever it was necessary to make them accept longer working hours or shorter rations. And when they become discontented, as they sometimes did, their discontentment led nowhere, because being without general ideas, they could only focus it on petty specific grievances.” ~George Orwell, Nineteen Eighty-Four

Author and researcher Alan Watt explains the significance of turning the people’s attention onto sport and away from the events and circumstances which directly and deeply affect their lives. Commenting on Wells’ thoughts from 1905, he notes:

“At that time, sports was something that children , schoolchildren were into. Adults became adults and grew on to adult things. So it was unimaginable at the time that people could actually believe there’s even a need for adult sports and entertainment, never mind having arenas built across the world.” ~Alan Watt

The ritualistic ceremony of professional football culminates each year with the Superbowl, which is presented with a half-time show featuring top pop-stars performing medleys laden with Illuminati symbolism and occult messages. The event captures the inherent tribal tendencies of the males, and safely directs onto a meaningless playing field.

“Because the average man was to become more disengaged from his own destiny as the expert class arose, it was decided that the males would get their outlet, basically, gradually becoming helpless, as males, through sports. Therefore they’d have a tribal team they identified with, they could achieve the model as if they’re winning, and in their own personal lives they’re getting no further, they’re getting disenfranchised, in a sense, as experts took over decision-making for them in all kids of fields.” ~Alan Watt

William Cooper was one of the original American conspiracy theorists, having written Behold a Pale Horse in 1991, shining light onto many of the elite plans for national and global domination. He too spoke of how sports is used to pacify the masses, and how it creates extraordinary distortions in the value of male energy.

“It’s the Roman Circus. What does the Emperor do when the people become restive, and when the people are asking questions. When the people don’t like the policies of the Emperor, he sends them to circus! He creates a circus, fills a giant coliseum, and he begins to throw the Christians to the lions. And he has great chariot races. And football games. And basketball games. All to keep the idiots preoccupied with things that don’t mean anything in the scheme of the entire world.” ~Bill Cooper

This year will be no different, and as the world watches a major display of fictitious tribalism, police state surveillance and military worship, a look into history reminds us of just how far we’ve come down the road of mental slavery and mass distraction.

The following video features clips of Watt and Cooper talking about the role of football and male sports culture plays in controlling the masses and capturing our natural drive for conquest and competition so that we have no energy available to revolt against the tyranny of authoritarianism.

This article (Dystopian Warnings of How Sports are Used to Control the Masses) was originally created and published by Waking Times and is published here under a Creative Commons license with attribution to Isaac Davis and WakingTimes.com. It may be re-posted freely with proper attribution, author bio, and this copyright statement.