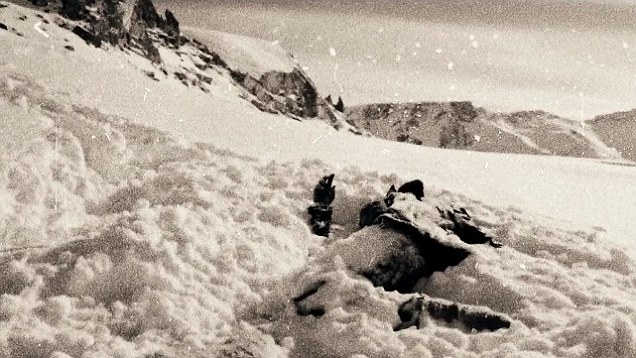 A mysterious case of nine experienced skiers who died in bizarre circumstances on an expedition into Siberia may have been solved by an America researcher.

Donnie Eichar, a film-maker and author, spent four years investigating the so-called Dyatlov Pass incident, and has now claimed that he has discovered a ‘scientific’ explanation for the baffling case.

The skiers, who were all students, were led into the wilderness of the Ural mountains by 23-year-old Igor Dyatlov. Oblivious to what fate had in store: Four of the victims – Nicolai Thibeaux-Brignolle, Luda Dubinina, Semyon Zolotarev and Zina Kolmogorova

Their aim was to reach the remote Otorten Mountain, but – with the exception of one man who turned back early due to ill health – the entire party would be found dead beneath the snow.

Rescuers sent out into the -24-degree weather to track the party down at first found only a collapsed tent, still filled with all the clothing and survival gear needed to make the rest of the journey.

But the empty tent baffled investigators, as it still contained items of clothing and pairs of shoes – implying that some of the students had ventured out into the wilderness barefoot and without coats.

Even when later searches uncovered the frozen bodies of all nine victims, no convincing explanation could be found for why the experienced hikers – who would have been well-versed in winter survival techniques – had come to such a tragic end.

Search parties found one group of bodies lying in the snow on flat land near a river, a mile from the tent, next to the remains of a long burnt-out fire.

Around 350 yards away lay the corpse of Dyatlov, the engineering student from Ural Polyetchnic who had put the expedition together and was its leader. His name would later be given to the area where the tragedy took place, as well as the incident itself.


Nearby, a search dog sniffed out the remains of Zina Kolmogorova, 22, under four inches of snow, and then that of Rustem Slobodin.

The bodies were in a line 200 yards apart, as if they had been trying to crawl behind each other back up to the shelter of the tent, but never made it. Eerie: The tent as the rescuers found it on February 26, 1959, which had been cut open from inside

Another two months went by before the rest of the group were found, under 15ft of snow in a den they had desperately hollowed out for themselves before succumbing to the cold.

Some of this group had broken bones and terrible internal injuries but, strangely, no external wounds, not even scratches on the skin.

Post-mortem examinations of all nine bodies threw their own anomalies, as some bodies were fully clothed, others almost naked. One, belonging to Lyudmilla Dubinina was missing her tongue and eyes.

An investigation by a Soviet government inspector was also fruitless, and was quietly dropped after concluding nobody was to blame. Lev Ivanov, the inspector, concluded only that all nine deaths had been caused by what he described as ‘an unknown elemental force which they were unable to overcome’. Unsolved mystery: The skiers setting up camp on February 2, 1959 in a photo taken from a roll of film found at the camp of the Dyatlov Pass Experienced skiers: Yuri Yudin hugging Lyudmila Dubinina as he prepares to leave the group due to illness, which saved his life as he left the expedition before the deaths

But in a recent interview with Failure magazine, Mr Eichar hinted at his conclusion, saying: ‘The conclusion that I have come up with could only have happened with the help of modern science and the help of the National Oceanic and Atmospheric Administration.’

Jason Zasky, who interviewed Mr Eichar, also wrote that his theory: ‘involves a particular type of repetitive wind event (one that could be produced by the topography of Dead Mountain), which in turn might have triggered panic-inducing infrasound.’

Mr Eichar has stayed tight-lipped about the specifics, but said the original investigator: ‘couldn’t explain what happened because he lacked the science and technology to do so.’

The ‘infrasound’ theory to which the interviewer refers is a bizarre – but apparently plausible – explanation which argues that sound waves too low to hear could have subtly affected the minds of the skiers, panicking them and causing them to rush recklessly out into the snow, where the cold killed them.

These waves of infrasound, it seems, could have been produced by high winds resonating thanks to the shape of the mountains.


Studied have suggested that infrasound – soundwaves too low for humans to hear – can nonetheless produce feelings of unease, awe or even terror which cannot be explained any other way.

It is unclear how far this explanation matches Mr Eichar’s – but supporters of the theory claim it can account for the bizarre situation in which the bodies were found.

Cloudy with a Chance of Tempestarii: Witches, Warlocks, and Weather Control

by EsoterX “Everybody talks about the weather, but nobody does anything about it” – Charles Dudley Warner I’ve had it with weather, and I’m...