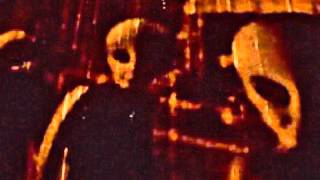 Dulce underground secret Base under Mt. Archuleta, Dulce, New Mexicothis footage has allegedly been smuggled out from the Dulce alien underground base where humans and aliens work together on horrific bio genetic experiments this mind blowing new footage leaves many questions unanswered you can see a vast hall of cryo genetic feeding tanks and vats Each of these tell a confusing, disturbing story of human / alien interaction in the top secretHuman alien hybrid breeding programs This is the Largest Reptilian and Grey Base in America.here Atomic Manipulation, cloning, studies of the human aura, advanced mind control applications, animal/human crossbreeding, visual and audio human chip implantation, abduction and feeding off of humans

In this article:Alien, Base, Cryo, Human, Mind, Secret, Tanks