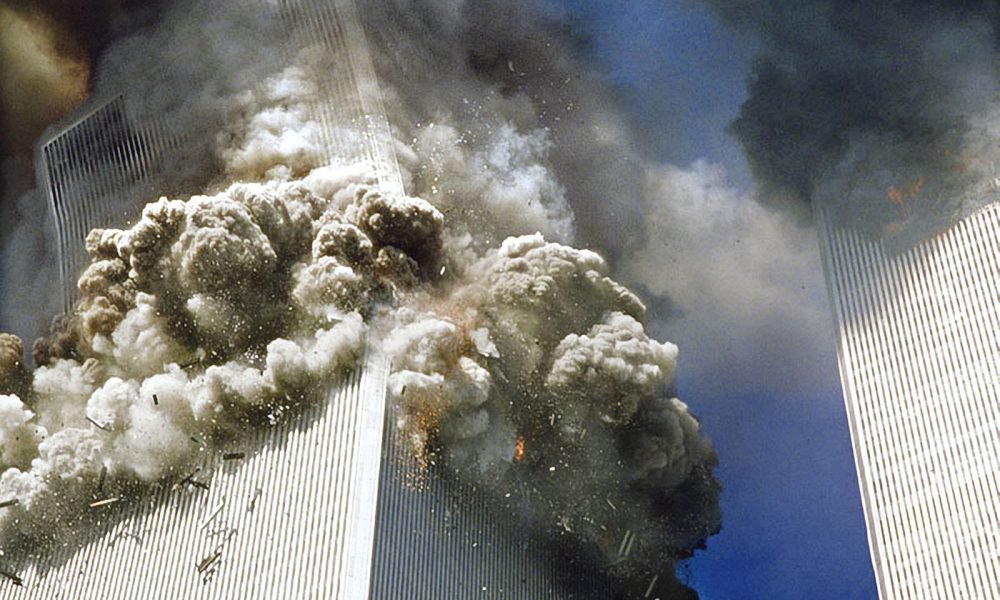 The destruction of the World Trade Towers on 9/11 is an event that continues to spark our awakening to the malice contained at the heart of several governments. These governments are dangled from a string by the corporations who sit above them, who are in turn dangled by the financial elite who sit above them.

This is important to know. Prominent politicians have referenced this ‘secret government’ for decades, but when a topic like the ‘deep state‘ is presented on mainstream media, it’s pushed as a conspiracy theory. While this can get frustrating, a growing number of people are seeing through the veil more than ever.

The End Of Our Innocence

Prior to 9/11, many global citizens, especially American citizens, could not fathom that their government could do anything so barbaric, so unethical, and so destructive. It’s quite ironic that for years, Western media has falsely accused several politicians of other nations of murdering their own people, the latest example being the chemical gas attacks blamed on Syrian president Bashar al Assad. But many people are seeing through this, and coming to understand how false flag terrorism has been used a lot throughout history, both prior to and post 9/11. That said,  no event has had the awakening effect that 9/11 had and continues to have.

Today, we have thousands of architects and engineers, many academicians and even peer-reviewed studies that show there is no possible way that planes could have brought down the two towers, as well as the official story about the collapse of building number seven, which wasn’t even hit by a plane. This is why the global citizenry, and judging by the latest polls, the American citizenry, do not believe the official story put out by the government regarding what really happened on that day. It’s not because we are stupid, it’s not because we are ‘conspiracy theorists,’ it’s simply because we questioned what was being told to us via mainstream media, and decided to investigate for ourselves.

U. S. Politicians and others within government have not really questioned what happened on 9/11–except for Donald Trump. One of his engineers was the architect of the building. Here’s what he had to say, taken from this interview:

It wasn’t architectural defect…The World Trade Center was always known as a very very strong building…Don’t forget that building took a bomb in the basement (1993). Now the basement is the most vulnerable place because that’s your foundation, and it withstood that…I got to see that area, about three or four days after it too place because one of my structural engineers actually took me for a tour, because he did the building and I said “I can’t believe it.” The building was standing solid and half of the columns were blown out…So, this was an unbelievably powerful building.

After talking about the structure of the building, and the way it was built with the steel on the outside (first building ever to do so for structural purposes …), and how it’s not possible for a plane to destroy that, he went on to say:

How could a plane, even a 767 or a 747 or whatever it might have been, how could it possibly go through the steel? I happen to think they had not only a plane but they had bombs that exploded almost simultaneously because I just can’t imagine anything being able to go through that wall….I just think that there was a plane with more than just fuel. Obviously they were very big planes, they were going very rapidly…You’re talking about taking out steel, the heaviest caliber steel that was used on the building. These buildings were rock solid.

Trump also stated the fact that the US government had knowledge before the attack before it happened, and they still did not stop it. He also mentioned that he saw a big hole in some of the steel beams, hinting to explosions.

Trump has been quite outspoken regarding corporate control over the government,  as well as all of the deceit that goes on as to how our government has been hijacked by rogue groups within the government. It’s easy to see why he was and is completely vilified. It had nothing to do with racism or sexism, and if you think this, you’re simply regurgitating what you get from television programming, and have no understanding of how politics works. We go into it deeper here:

The Deep Truth Behind Why Trump Is President

Other Commentators On The Deep State

Below is a great quote from Robert W. Welch Jr, given way back in 1958, addressing the Deep State.

“So brush the insiders dust out of your eyes, my friends, and the communist soap suds out of your Brain, and ask yourselves in all honesty, what on Earth is wrong with the United States simply minding its own business, or with having its foreign policy function primarily for the safety and benefit of the American people? Which is exactly what we had done for the first 140 years of our existence as a nation, to the incredible advantage of ourselves and everybody else, everybody, that is, except a numerically small clique of power-lusting conspirators who have somehow inflicted themselves on a gullible world.”

The American empire has had a history of infiltrating and destroying other countries through unethical means (terrorism) and then stepping in to be a ‘savior,’ imposing their will on others. This has been done through the most savage means, with 9/11 being one small example compared to what they’ve done overseas.

The real menace of our Republic is the invisible government, which like a giant octopus sprawls its slimy legs over our cities, states and nation … The little coterie of powerful international bankers virtually run the United States government for their own selfish purposes. They practically control both parties … [and] control the majority of the newspapers and magazines in this country. – John F. Hylan was Mayor of New York City from 1918-1925 (source)(source)

But it is not representative of America, but rather the corruption within politics and the deep state that in no way represents the will of the American people.

Steve R. Pieczenik is one of many people from ‘within’ these ranks who is currently speaking about this. He’s a former United States Department of State official and has been involved with the intelligence community for years. He’s been through and worked within multiple administrations. He has been providing updates on what is happening, the deep state that exists within the American government and how there is currently a ‘battle’ between the Trump administration and the deep state. You can find those interviews online everywhere, he conducted most of them with Alex Jones. He’s also been outspoken and addressed that Trump has already commented on 9/11, and referenced the interview below.

This is why Trump has been vilified. I’ll leave you with this great quote from author Richard Dolan, taken from one of his 2016 articles.

For sure, the power elite closed ranks and did everything possible to ensure a victory for Clinton. This included not only the Democratic party (which previously played dirty pool against Bernie Sanders), but the entire mainstream media machine, the financial community, the EU, and even the Republican party itself. If nothing else, I had concluded that the media alone had done a sufficient job of demonizing Trump – multiple negative headlines daily for more than a year – to make him unelectable to the American people.

For more than a year, we have been told that Trump is a racist, sexist, xenophobe, liar, cheat, and narcissist. The attack bears all the marks of a coordinated effort among the major news outlets: CNN, NYT, WaPo, HuffPo, USA Today, and the rest. It reminded me very much of the concerted media attack against Brazil’s Dilma Rousseff which culminated earlier in 2016 in her impeachment and removal from power. In the case of Rousseff, we see what has been alternately described as a soft coup or a Wall Street coup, rather along the lines of the “color revolutions” of a few years earlier (which are now largely understood as CIA-NGO orchestrated). In both cases, pretexts were created and hammered home by an insistent media that whipped up public opinion. In Brazil, it worked. It seemed like it would work in the U.S.

It is important to understand why Trump was demonized. To be sure, his character makes it easy. There is no shortage of narcissistic, sexist, or otherwise offensive statements in his repertoire from which to draw. But I have never and will never believe this is why he was demonized. Ultimately, Trump is a disruptor, and his disruption falls squarely against the two key pillars of the American ruling elite’s ideology: neoliberalism and neoconservatism.

There are many reasons to believe that Trump’s survival is a sign that the deep state is losing its power, and that the battle that Steve Pieczenik talks about is going in favor of the Trump administration and their allies. If so, 2018 might be the last year we have to pass through 9/11 without the full and incontestable knowledge about what actually happened.