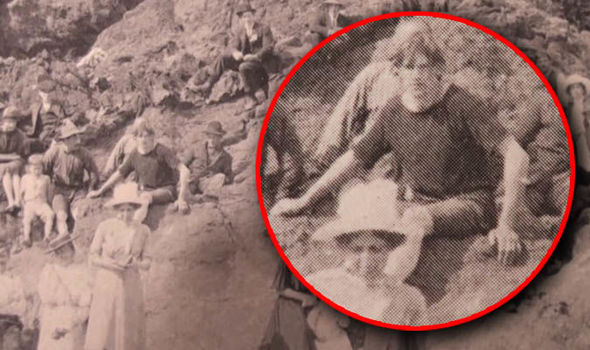 A BIZARRE photo of what appears to be a time traveller in 1917 has resurfaced online after scores of disbelievers have finally found a piece of ‘evidence’ which made them question the laws of physics.

The photo taken more than 100 years ago in Canada, portrays a group of men, women and children sitting on the side of a hill of some sorts.

But eagle-eyed observers have noticed the photo stands out for a very particular reason – what appears to be a man straight out of the 20th century.

The photo was discovered in Lester Ray Peterson’s 1974 book ‘The Great Cape Scott Story’ – a tale of the Canadian region’s history.

What has fascinated those who came across this photo is how out of place the ‘surfer man’, as some have called him, appears to be.

He is wearing a very baggy t-shirt and shorts, sporting a modern windswept haircut and is clearly at odds with everyone else around him.

Looking closer at the people around, the man to his left appears to be utterly stunned by his presence.

Further to the right a woman also appears to be pointing her hand at the supposed time traveller, leading many to speculate the man was out of place and out of his time.

In fact, it almost looks as though he jumped right into the scene as the photo was taken.

YouTuber Jamie D. Grant found himself gobsmacked when he picked up the book and came across the mysterious photograph.

In a YouTube video titled ‘Time Travel proof found. Truth or Illusion?’, he says: “Notice the group, their clothes, their hats. Even how they sit poised for a photo.

“Now look closer. His head uncovered, his hair, his shorts. The man on the left stares in disbelief.

“Has a mysterious traveller proved the impossible and journey through time? What do you think?”

The ‘surfer man’ has joined the ranks of the so-called ‘time travelling hipster’ who appeared in a 1940s photograph with a fashion sense seemingly decades ahead of those around him.

But as some have pointed out, ‘surfer man’ may appear to stick out like a sore thumb from the rest of the crowd, but his clothing could have very well been in vogue.

One person commenting on the book on GoodReads.com, referenced a Post Gazette article, saying: “In the comments to the article, someone mentioned that t-shirts were around then and that they made it into the common lexicon soon after that date – it appeared in the Merriam-Webster Dictionary in the 1920s.

“This Article says they were worn by US Navy sailors as early as 1913.

“Considering that other guys in the picture are also wearing shorts, I’m going to say that he’s not a time traveler.

“Other than Bill and Ted, what time travellers would think that a t-shirt and shorts would be the best thing to wear when time-traveling into the past anyway?”

In either scenario, physicists all agree that it is impossible to travel back in time by our current understanding of the universe and its laws.

According to Professor William Hiscock, of Montana State University, we can move forward due to the the time-dilation effect of Special Relativity. Moving backwards however is a dead end.

The expert said: “Time travel into the past, which is what people usually mean by time travel, is a much more uncertain proposition.

“There are many solutions to Einstein’s equations of General Relativity that allow a person to follow a timeline that would result in her (or him) encountering herself – or her grandmother – at an earlier time.

“The problem is deciding whether these solutions represent situations that could occur in the real universe, or whether they are mere mathematical oddities incompatible with known physics.”

The professor underlined that no experiment or observation in the universe has ever indicated such time travel occurs.

Advertisement. Scroll to continue reading.
In this article:time travel