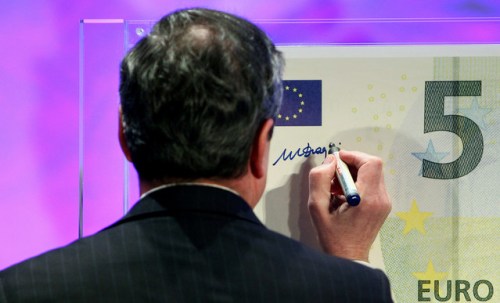 Depiction of the mythical Europa on the latest European funny money appears to betray the guiding hand of the Illuminati.

Aside from the usual arches, bridges and gateways which are depicted on the current euro banknote, the next generation of banknotes will be enriched with the countenance of the mythical figure of Europa, looking out of a window.

In November 2012 the European Central Bank announced her portrait is to adorn the new euro banknote which will be put in circulation from May 2013 onward. The ECB website gives a general description of the new banknote, noting that “the watermark and hologram display a portrait of Europa, a figure from Greek mythology”– and hence the name of this series of banknotes.” Europa’s face is displayed in a blinding array of blue-purple-green on one side of each banknote, with all kinds of security features embedded within its design to protect against counterfeiting. By the way: with all this talk of counterfeit-resistant technology embedded within the euro banknote- we can only laugh realizing after all that the banknote itself is counterfeit: funny money by any other name, designed for inflation an deflation purposes, depending on what the next move will be on the international monetary chessboard.

Europa, in Greek mythology, was a Phoenician princess who one day found herself abducted by Zeus (in the shape of a bull). The portrait itself was borrowed from an archeological artifact, where she is depicted on the bull’s back, helpless and beautiful.

“We chose Europa because these are euro-banknotes after all”, ECB President Mario Draghi states. “So is there any figure better than Europa to serve as the new face of the Euro?”

The future look of the instable currency was presented by the European banking elite in a distinctly ritualistic setting, complete with altar, priest and pagan symbolism. President Mario Draghi of the ECB revealed the euro’s future makeover to the international press together with the following propaganda piece:

Presented under the arch of an ancient, pagan-style temple, the European Central Bank launched the new euro-series in a manner reminiscent of ancient rites performed by ancient peoples.

In this particular fest of the European Central Bank, the deity was mammon, and the performing priest the head of the European Central Bank: Illuminati ritualism in its purest form. In this photo we distinctly witness the coloring, blue-purple-green, designed for its mesmerizing effect on the audience. The arch under which Draghi stands represents an altar, where the priest (Draghi) communicates its god’s (Illuminati) commands to the congregation. The holy object, in this case the euro banknote, stands central, the object of worship- the face of a goddess.

On a parallel ECB website devoted to the new euro, mythical Europa is morphed into the image of young woman with a EU circle-design necklace. The woman introduces herself as Europa, after which she explains the security features of the new Euro note.

The entire presentation has a hypnotic feel to it, the goddess Europa adorning herself with the symbol of the twelve-star circle. In a ECB-pamphlet on the current euro banknote characteristics, the first page depicts the all-seeing eye with the 50 euro sign reflecting in the pupil.

Compared to the US dollar bill, an amalgamation of Illuminati symbolism, the euro’s sober surface has from its onset projected a neutral image- or so it appears at first glance. As René Guénon notes, the depicted architecture “carry symbols conveyed since the mists of time.” Basis geometric shapes, towering above us mere humans, to convey forms an structures that somehow affect the beholder. Now these shapes are accompanied by the image of Europa.

Another interesting feature of the future euro banknote is the window framing Europa’s countenance. In Illuminati symbolism the window is equivalent to the all-seeing eye.

In Christian E. Rieck’s Quid est Europa? Myth, Finality, Utopia, and the European Dream, the original intent of the EU is elaborated upon:

“the (European) Union intends to open a ‘window to the world’ and move closer to its citizens.”

Prefacing the introduction of the ECB’s latest euro note, the Greekreporter reports that “Europa, whose moniker could be translated as “wide- gazing” or “far-seeing,” is already depicted on Greek two- euro coins and several commemorative pieces.”

Back to the original Greek myth (original in this context is relative, as most myths are usually based on much older ones). According to Greek legend, Zeus was transfixed by a Phoenician woman named Europa. He decided to come down and seduce the woman. Zeus transformed himself into a tame bull. Because of it’s non-threatening appearance, Europa freely climbed onto the bull’s back, after which the animal ran like thunder towards the sea, with the woman clamping on to him for fear of injury. A clear cut abduction case. According to some, this ancient tale harkens back to ancient mystery-religions in which the bull stands central. The famous Hungarian philologist Károly Kerényi points out “most of the love-stories concerning Zeus originated from more ancient tales describing his marriages with goddesses. This can especially be said of the story of Europa”.

The fact that Zeus made use of deception to bear away Europa is significant.

“Zeus, as a white bull, made sure that he appeared to be tame”, writes British freelance writer Tim Harry, “and allowed the women to pet him. Zeus even laid down at the feet of Europa, and Europa eventually decided to see whether he was tame enough to ride. With Europa on his back, Zeus spots his opportunity and runs off with her into the sea.”

Peter Dawkins writes: “The myth is in essence the same as that of Osiris and Isis, wherein Isis is Europa and Osiris is the Bull. (Osiris, in Egyptian myth, is represented as a bull.) Horus, the child of Isis, fathered by Osiris, is equivalent to Hermes, the child of Europa, fathered by Zeus (the Bull).

The deity from biblical times most reveired was the Canaanite deity Moloch, often depicted as a bull. According to Wikipedia “Moloch worship was practised by the Canaanites, Phoenician and related cultures in North Africa and the Levant.”

Let’s bring into memory that the mythical Europa was a Phoenician. The bull, then, transformed by the Greeks as a manifestation of Zeus, may in its origins refer to Moloch.

“As a god worshipped by the Phoenicians and Canaanites, Moloch had associations with a particular kind of propitiatory child sacrifice by parents”.

The symbol of Europa and the Bull finally represents not so much a marriage, but a rape- where the bull-deity overtakes a continent with the aim of birthing world government. Such a theory may sound far-fetched, were it not that top Europe officials have admitted that the EU experiment serves as a way to merge the EU into a one world government. Former European Commission president Jacques Delors in a speech to the Royal Institute of International Affairs titled The European Community and the New World Order stated:

“(…) giving birth to institutions to which sovereignty is to be transferred and which are to be given power manage cooperation and settle disputes is a slow and arduous process.”

“The contribution that the (European) Community as such can make to the new world order can, to use an image of the plant world, be considered something of a hybrid, what is produced by crossing a world power with an international organization.”

“I would add”, continued Delors, “- and I will not go into detail- that economic integration, unless it is backed by a strong political will, will not in itself produce stronger international institutions or help create world government. This is why, although the need for a new world order is self-evident, our era is one of trial and error or, as the harsher critics among us would have it, of impotence, inability to take on world challenges.”

This concept of cross-breeding “a world power with an international organization” is the witches-brew of the Illuminati, whether they leave their mark on US dollars, with its pyramid, its all-seeing eye, its owl- or the latest “counterfeit-proof” euro banknote with the raped princess Europa depicted on its side. When we view all the latest depictions on the euro note (the raped princess, the window) and compare these to the symbolic confetti splattered on the US greenback, we can only come to the conclusion that the symbolism is becoming more refined and subtle, tailored to endure the gaze of a more critical eye. The idea behind all these illustrations is nevertheless based on the same principle: at the highest levels of manipulation, humanity is guided not by argument of reason, but by archetypal images that tend to work straight on the emotional center of the human brain.