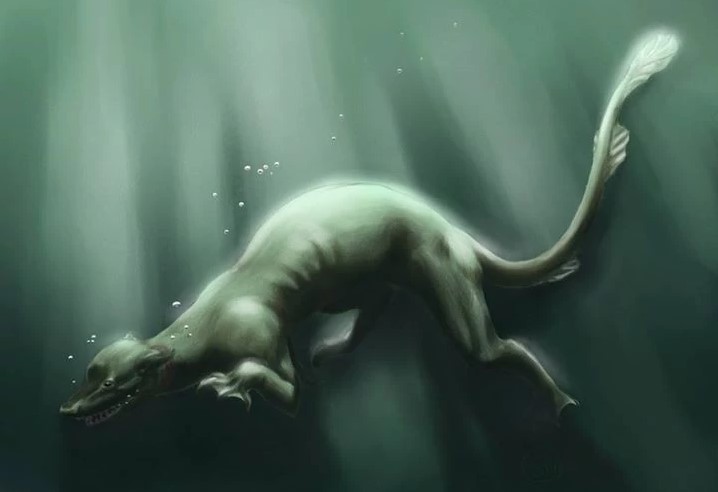 The name, Dobhar-Chu, is Gaelic and translates to “water hound.” The nickname for this creature — Irish Crocodile — may arise from legends about its gargantuan appetite and speed in and out of the water. It’s thought to be about seven feet long and carnivorous.

There are two accounts in a seventeenth century book of men’s encounters with the Dobhar-Chu and one account is mentioned in a poem about a woman who was killed by the beast in the eighteenth century. There are have been no modern sightings of this creature.

Accounts of Dobhar-Chu Written in 1684

Roderick O’Flaherty, in his book, A Description of West Connaught, wrote about a man’s encounter what he called the Irish crocodile. The man was on the shore of Lough Mark when he saw the head of a beast swimming in the water. He thought it was an otter.

The creature seemed to look at him, then swam underwater it reached land. It grabbed the man by his elbow and dragged him into the lake. The man took his knife from his pocket and stabbed it, which scared the animal away. It was about the size of a greyhound, had slimy black skin and appeared to be hairless.

Old ones who know the lake believe that Irish crocodiles live there. They reminisced about a man who was walking with his dog who encountered one. There was a struggle with the pair against the lake monster when the creature finally went away. When the waters receded after a long period of time, they found the beast’s corpse in a cave.

Grace Connolly was washing clothes at the edge of a lake when she was attacked by a Dobhar-Chu. Her husband, McGloughlan, heard her cries and rushed to help. By the time he got to her, she was dead and the Dobhar-Chu was still there.

The man killed her attacker who screamed before it died, summoning its mate. McGloughlan jumped on his horse to evade the beast. A friend joined him, but they realized the horses couldn’t outrun it. The dismounted and ducked behind a wall. As the beast hurled over the wall, they killed it.

There is a tombstone near Kinlough that bears a carved illustration of a large otter, impaled by a spear, held by a hand. The first name appears as Grace, but the last one is illegible due to the ravages of the weather. The date on the tombstone is 1722.

Some researchers theorize that the Dobhar-Chu was a matter of misidentifying giant otters. While they can be large, otters aren’t known to attack people. They don’t look like they are half- wolf and half-fish.

Others suggest that the Dobhar-Chu may be an unknown type of a rare predatory extinct amphibian. There’s no evidence to support this theory.

It’s possible that the creature was purely legendary, but this doesn’t explain the three accounts of the beast unless the accounts are simply early urban legends.

Advertisement. Scroll to continue reading.
In this article:Dobhar-Chu, Irish Crocodile