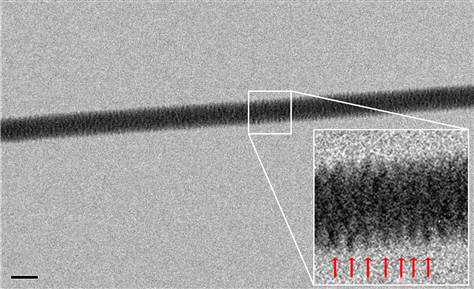 Fifty-nine years after James Watson and Francis Crick deduced the double-helix structure of DNA, a scientist has captured the first direct photograph of the twisted ladder that props up life.

Previously, scientists had only seen DNA’s structure indirectly. The double-corkscrew form was first discovered using a technique called X-ray crystallography, in which a material’s shape is reconstructed based on how X-rays bounce after they collide with it.

A bundle of DNA is supported by two silicon pillars.

But Di Fabrizio and his colleagues developed a plan to bring DNA out of hiding. They built a nanoscopic landscape of extremely water-repellant silicon pillars. When they added a solution that contained strands of DNA into this scene, the water quickly evaporated and left behind cords of bare DNA that stretched like tightropes between the tiny mesas.

They then shone beams of electrons through holes in the silicon bed, and captured high-resolution images of the illuminated molecules.Molecules of DNA, or deoxyribonucleic acid, store the genetic instructions that govern all living organisms’ growth and function.

Di Fabrizio’s innovation will allow scientists to vividly observe interactions between DNA and some of life’s other essential ingredients, such as RNA (r ibonucleic acid ). The results of Di Fabrizio’s work were published in the journal NanoLetters.