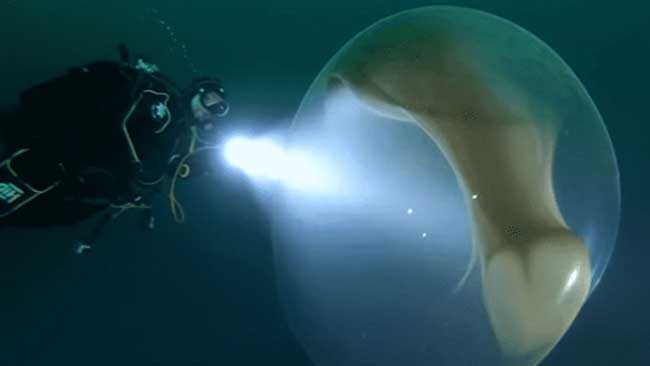 Space probably brings less surprise than the world’s waters of our planet. This was convinced by a group of divers and an underwater photographer when they plunged into the deep waters of the Norwegian coast. Divers obviously did not expect to meet unexpected diving partners – a transparent ball the size of an elephant.

The transparent sphere floated about 20 meters below sea level and glowed when it was lit by the light of lanterns. Amazed divers saw an unknown life inside a mysterious underwater object. At least, inside the “egg”, there was a visible “tenant” of this refuge. It is a pity of course, but there are no great details about this amazing and mysterious egg.

However, is it really surprising that almost nothing is known about what is happening at the bottom of the ocean? Probably no. Especially if we remember that since 1969 the moon was visited by 12 people, and only 3 reached the deepest point of the seabed in the Mariana Trench (moreover, one of them was not even a scientist).

Of course, we cannot use satellites in the seas, because water is opaque to electromagnetic radiation and visual observation. In this environment, other instruments are needed that are superior to sonar. Today, less than 15% of the oceans have been mapped with 100-meter detail, and even less have been carefully studied.

The unknown abyss of the ocean.

Today, we do not know exactly how many species of life the global ocean protects. The 10-year international research program Census of Marine Life conducted a “survey” of 250,000 species. And judging by the conclusions of experts, there are at least 750,000 (not counting bacteria) unknown species!

In other words, a huge multitude of “uninvited” by science inhabitants is located and most likely safely lives in the ocean.

It’s clear that many of these species will die out before they are discovered, scientists say. For example, also an “egg” representing an unknown life (or known mutation) may remain an unknown species.

We continue to seek life on the planets of the galaxy, directing technological research into places that can be reached after several years interstellar travel. Meanwhile, we know almost nothing about the world, which is much more useful to us than space.

The ocean provides at least half of the oxygen we breathe. It mitigates the effects of climate change by eliminating more than a third of the carbon dioxide we produce, fueling at least one billion people.

The ocean allows you to move 90% of the world’s goods. In addition, the ocean provides important discoveries for the latest generation of medicines. And of course, the ocean gives life to unknown species of life.

In this article:egg creature, Norwegian coast