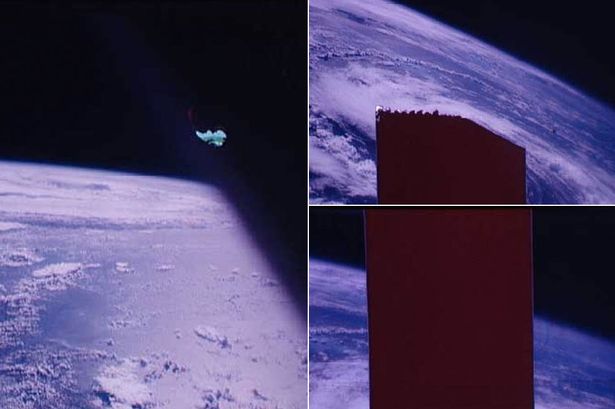 NASA has been accused of hiding the existence of a UFO – with a piece of duct tape.

Images shot during a famous space mission appear to show a mysterious UFO in the distance.

Astronauts then whack a piece of sticky tape over camera lens, neatly blocking our view of the strange object.

A UFO hunter found the images in footage from the Apollo 7 mission, which featured the first ever live broadcast from space.

The spaced-out blogger claimed the image showed “aliens viewing human history being made”. What on earth – or in space – could this weird object be?

“Look at the detail of the ship,” the space cadet wrote. “It’s made by a species far more advanced than us and its design looks nothing like most of us would imagine it to be. It is beautiful.”

Some oddballs claimed the UFO could even be an angel, whilst others were certain the images showed NASA trying to prevent humanity from knowing about alien life.

“There’s def something being covered up here,” one UFO enthusiast wrote. “No pun intended.” NASA are famous for their mastery of tech – but did they use simple duct tape to cover up the existence of aliens?

“The tape is nothing sinister,” wrote an anonymous commentor. “It is just the usual tape which holds the end of the film reel to the spool. I used to process film back in the 70’s and many brands used adhesive tape in this way.”

We have asked NASA for comment and will update you if they provide an explanation.