A famed designer of metallic-appearing movie creatures has died from the result of injuries from a fall.

Swiss surrealist artist H.R. Giger who designed the monster and revolutionary sci-fi sets for the film Alien died in a hospital on Monday, May 12, 2014. He was 74.

Hans Ruedi Giger, the son of a chemist, was born Hans Rudolf in the eastern Swiss town of Chur on February 5, 1940.

Having studied architecture and industrial design in Zurich, Giger’s work explores the relationship between the human body and the machine, and he created nightmarish dreamscapes in a style he described as “biomechanical.”

Giger’s vision of a human skull encased in a machine appeared on the cover of “Brain Salad Surgery,” a 1973 album by the rock band Emerson, Lake and Palmer. Along with his design for Debbie Harry’s solo album, “Koo Koo” (1981), it featured in a 1991 Rolling Stone magazine list of the top 100 album covers of all time.

Giger went on to work as a set designer for Hollywood, contributing to Species, Poltergeist II, Dune, and most famously Alien, for which he received a 1979 Academy Award for special effects. His most famous creation would be the otherworldly creature in Ridley Scott’s 1979 science fiction horror film Alien. Frequently frustrated by the Hollywood production process, Giger eventually disowned much of the work that was attributed to him on screen.

In 1998, he opened his own museum in Gruyeres in central Switzerland, which displays many of his own paintings, sculptures and film designs as well as his private art collection, including works by Salvador Dali.

Although Giger is best known for his creations for the Alien films, cryptozoology fans will recall him more significantly for his Species invention, Sil. And from Sil may have come the modern Chupacabras (the singular and plural of the name is the same)!

In 2010, National Geographic News published an article by Kar Than quoting me about the various origins theories for Chupacabras ( see here).

Loren Coleman, director of the International Cryptozoology Museum in Portland, Maine, agreed that many Chupacabras sightings—especially the more recent ones—could be explained away as appearances by mangy coyotes, dogs, and coyote-dog hybrids, or coydogs.

“It’s certainly a good explanation,” Coleman said, “but it doesn’t mean it explains the whole legend.”

For example, the more than 200 original Chupacabras reports from Puerto Rico in 1995 described a decidedly uncanine creature.

“In 1995 Chupacabras was understood to be a bipedal creature that was three feet [about a meter] tall and covered in short gray hair, with spikes out of its back,” Coleman said.

But, as if in a game of telephone, the description of the Chupacabras began to change in the late 1990s, due to mistakes and mistranslations in news reports, he said.

By 2000 the original Chupacabras had been largely replaced by the new, canine one. What was seen as a bipedal creature now stalks livestock on all fours.

“It was actually a big mistake,” Coleman said.

“Because of the whole confusion—with most of the media reporting Chupacabras now as dogs or coyotes with mange—you really don’t even hear any good reports from Puerto Rico or Brazil anymore, like you did in the early days. Those reports have disappeared and the reports of canids with mange have increased.”

So what explains the original Chupacabras myth?

One possibility, Coleman said, is that people imagined things after watching or hearing about an alien-horror film that opened in Puerto Rico in the summer of 1995.

“If you look at the date when the movie Species opened in Puerto Rico, you will see that it overlaps with the first explosion of reports there,” he said.

“Then compare the images of [actor] Natasha Henstridge’s creature character, Sil [picture], and you will see the unmistakable spikes out the back that match those of the first images of the Chupacabras in 1995.”

Another theory is that the Puerto Rico creatures were an escaped troop of rhesus monkeys on the island, which often stand up on their hind legs.

“There was [allegedly] a population of rhesus monkeys being used in blood experiments in Puerto Rico at the time, and that troop could have got loose,” Coleman said.

The Visuals Are Compelling

Of course, I credited Ben Radford for the Species theory, but the reporter left that out. In Ben Radford’s book, Tracking the Chupacabra, the then Skeptical Inquirer editor wrote that Chupacabras, in the original 1995 form, came on the scene in Puerto Rico, after the “first eyewitness” viewed the film or clips for Species. Radford might be wrong about this hypothesis, but it is worthy of noting the similarity in body design between Sil and the classic P.R. Chupacabras.

The Associated Press noted a final intriguing tribute that Giger himself acknowledged before he died.

Giger was pleased that his idea of machines with human skin became a popular motif in body art, that many took on a Giger flair. “The greatest compliment is when people get tattooed with my work, whether it’s done well or not,” he told Seconds magazine in 1994. “To wear something like that your whole life is the largest compliment someone can pay to you as an artist.” 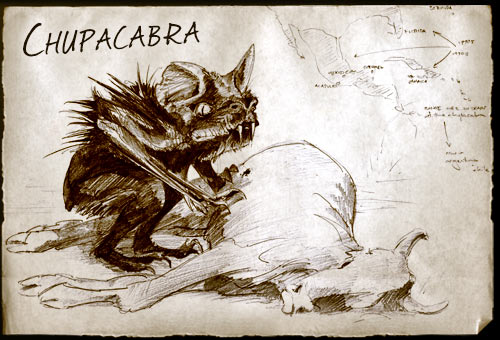 One of the most mysterious creatures of Latino popular culture is the infamous “Chupacabras,” an alleged animal capable of sucking the blood of its...