The astral body appears in many different cultures throughout time and throughout the world. In Egypt, the “KA was not the soul of man . . . but its vehicle” (Muldoon & Carrington, 2011, p. xxii). In the Qur’an, Muhammad’s astral body travels in the Isra and Mi’raj story.  And, among other sacred and secular texts, the astral body appears in Hindu scripture, Taoist practice, and even Christianity. In his article regarding the afterlife, Woolger (2014)  notes that “in such journeys in the world religions and innumerable tribal practices” scholars have “described a common pattern of ‘ascent’, which is to say an ecstatic, mystical or out-of body experience, wherein the spiritual traveler leaves the physical body and travels in his/her subtle body into ‘higher’ realms”  –Daniel Miller

What is astral projection? According to Wikipedia , it’s “a term used in esotericism to describe a willful out-of-body experience () that assumes the existence of a soul or consciousness called an “astral body” that is separate from the physical body and capable of travelling outside it throughout the universe.  This time, Wikipedia seems to have gotten it right.

Astral projection falls into the realm of parapsychology, which includes ESP, telepathy, clairvoyance, psychokinesis, hypnosis, remote viewing, and more. When it comes to these topics, all of them are interconnected and relate to the study of human consciousness and quantum physics.

I’ve written multiple articles providing a number of sources showing how this phenomenon has been studied extensively and is used at the highest levels of governments. I’ve also presented peer-reviewed research, some of which is linked within this article, that shows extremely significant results, which is also emphasized by the quote below. The reality of such things is no longer a myth or pseudoscience, but scientifically confirmed. A great place to start your research if interested is the Institute of Noetic Sciences.

For many years I have worked with researchers doing very careful work [in parapsychology], including a year that I spent full-time working on a classified project for the United States government, to see if we could use these abilities for intelligence gathering during the Cold War… At the end of that project I wrote a report for Congress, stating what I still think is true. The data in support of precognition and possibly other related phenomena are quite strong statistically, and would be widely accepted if it pertained to something more mundane. Yet, most scientists reject the possible reality of these abilities without ever looking at data! And on the other extreme, there are true believers who base their beliefs solely on anecdotes and personal experience. I have asked debunkers if there is any amount of data that would convince them, and they generally have responded by saying, “probably not.” I ask them what original research they have read, and they mostly admit that they haven’t read any. Now there is a definition of pseudo-science-basing conclusions on belief rather than data!” – Professor Jessica Utts, Chair of the Statistics Department, UC Irvine (Dean Radin, Real Magic)

The truth is, these concepts are very real and have been scientifically proven, the only thing that gets in the way are human belief systems. No matter how strong the evidence is, it won’t be accepted by the collective or the scientific community simply because it’s either unexplainable given our limited parameters, or it’s just too much for the mind to handle. These concepts can be too much of a shock, too much of a game changer, and too much of a paradigm shifter.

These fields of study change everything we think we know about reality.

That being said, many concepts that don’t fit into the accepted framework of reality have also been subjected to official campaigns of ridicule. This, in my opinion, is purposefully done. While governments around the world have been studying and using such phenomena for intelligence collection purposes, these same entities use their influence over entertainment, mainstream media and academia to ridicule and ‘debunk’ these topics.

Thankfully, things are now changing, and the collective mind is opening up more and more every year. The introduction of new concepts and fields of study that challenge our reality have always received harsh backlash throughout human history.

When it comes to astral projection, a decades-old document prepared by the U.S. Army Office of the Surgeon General Medical Intelligence Office states:

“According to Pullman, Director of the Southeast Hypnosis Research Center in Dallas, Texas, before the end of the 1970S, Soviet diplomats will be able to sit in their foreign embassies and use ESP (in this case a form of the apport technique) to steal the secrets of their enemies. Pullman states that a spy would by hypnotized, then his invisible “spirit” would be ordered to leave his body, travel across barriers of space and tie to a foreign government’s security facility, and there read top-secret documents and relay back their information. Such “astral projection” already has been accomplished in laboratory settings.”

These are fascinating claims, and we’ve seen confirmed results of related phenomenon like Jupiter.(source) Not many people know this, but STARGATE remote viewer, Ingo Swann, was the one who discovered the rings around Jupiter.

Another document from the Defense Intelligence Agency, dated 1975, states that two Soviet scientists had:

The Defense Intelligence Agency concluded in 1972 that this tactic and other related abilities were used by the soviets to discover the contents of top secret US documents, the movements of their troops and ships, and the location of their military installations.  (source)

This is interesting because after the US government declassified the STARGATE program, they revealed that this is exactly what the US was doing to the Russians.

It’s safe to assume that the US military was also using these tactics for similar purposes. Who knows how far this field of study has come since these documents were first drafted? In all likelihood, the literature that has been declassified is not even the tip of the iceberg.

Based on my research into the black budget world, this wouldn’t really be surprising.

And then there are documents like this one, proving that the US has done the same thing as the soviets, successfully. (See full document here). 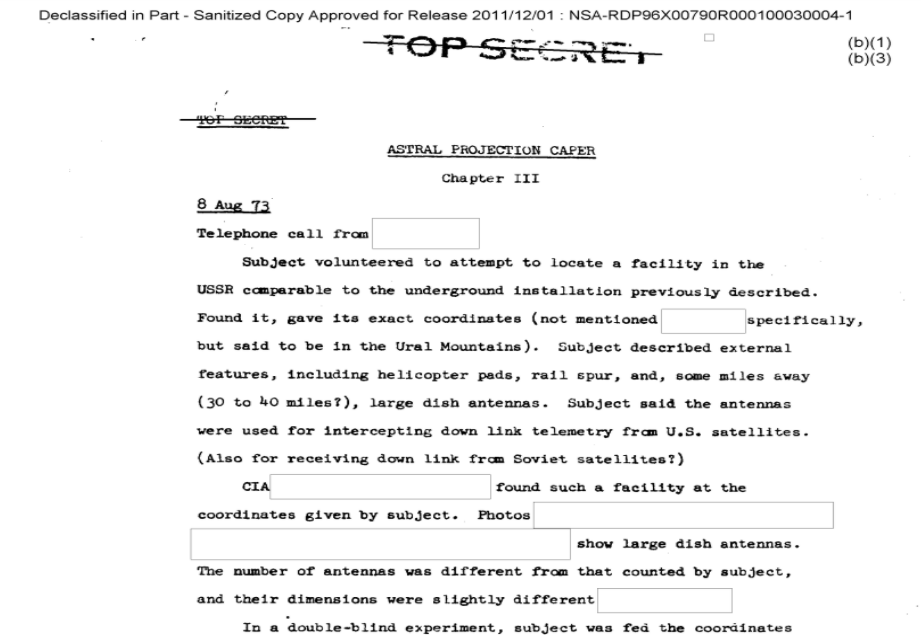 If you can’t read that last part, it states:

Sheet of paper, continued on another sheet, and continued this process until several separate sheets had been filled in, and subject had returned to his starting point. When the pages were joined together, the result was an exact match and an absolutely accurate topographical map of the island. Subject also described exactly what was going on on the island.

The subject mentioned in the above document is Pat Price. I previously wrote an article about Pat Price and their relationship and discovery of extraterrestrial beings, something that is very common among other STARTGATE remote viewers. You can read that article below.

The same document in the screenshot above also mentions Ingo Swann. I recently published an article about him that you can read below.

One of Stanford’s Most Successful Remote Viewers Shares His Encounter With The Real ‘Men In Black.’

The thing is, these were all remote viewers, not astral projectors. Remote viewing is the ability to describe remote locations (regardless of distance) through some type of perception channel that possibly exists within the brain. You are not actually ‘flying’ outside of your body using another ‘spirit’ body like astral projection. Although these two fields of study are similar in nature, it’s important to note that they are different

What Does This Mean For Humanity & Human Consciousness?

The day science begins to study non-physical phenomena, it will make more progress in one decade than in all the previous centuries of its existence –  Nikola Tesla

Is humanity ready for this type of information? Parapsychology represents the next step for ‘science,’ as it correlates to quantum physics. It’s one of many ways we can confirm the metaphysical world and ‘supernormal’ human capacities that have existed for centuries and have been studied all over the world.

The only problem is that today it’s being weaponized and used for motives that are not beneficial to humanity as a whole. This is odd, because these abilities really show us another way in which we are all connected, that we are all one.

Humanity has a poor track record of using our technological advances and discoveries for ulterior motives, benefiting only militaries and governments. We need to start being transparent about these fields of study so we can further advance civilization as a whole, not only the elite groups of society.

So, I ask again, is humanity really ready for this stuff? Well, it seems that many more people are becoming aware of parapsychological phenomena and are beginning to use it to better themselves. Mind-body healing techniques are one example, and healing at a distance is another.

The more people work on cultivating inner peace, the better our planet will be. Change starts from within, and these abilities go hand in hand with human impact. Hate, war, violence, etc. are not the best ways to use these abilities.

There is a lot of good we could do with these capabilities, and I believe that there are a lot of good people on Earth who would never use them to cause harm.

Imagine an entire planet full of people who would never cause harm to anybody else. I believe this is our human nature, and that we are all born with a moral compass, but that doesn’t mean we are not capable of corruption. Some have lost touch with that moral compass, and there are several reasons for that.

Service to others goes hand in hand with these types of abilities. However, as much as they can progress the human race and our overall understanding of reality, they can also be used for ulterior motives.

When the human race is ready, I believe that all of these techniques and understandings will play integral roles in our society.

If you would like to learn more about astral projection you can check out our new show on CETV called Waking Realm here.

In this article:astral body, OBE