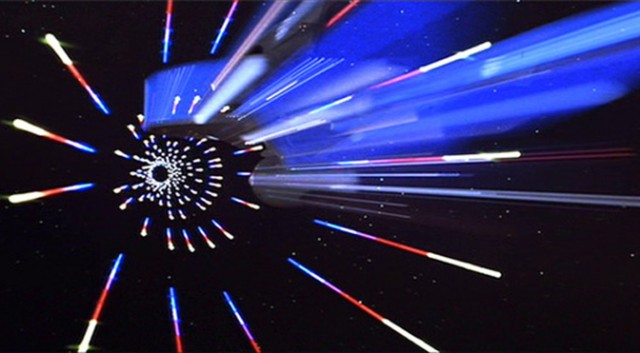 Your tax dollars, believe it or not, are (or at least were) being used by the federal government to research crazy sci-fi concepts like “warp drives,” wormhole travel, high-energy laser weapons, and invisibility cloaking, newly-declassified documents reveal.

Thanks to a Freedom of Information Act (FOIA) request, the Defense Intelligence Agency (DIA) was forced to make public the details of some 38 formerly top-secret government projects, which had been classified and sent to Congress last year.

Steven Aftergood, director of the Federation of American Scientists’ Project on Government Secrecy, made the request to see what the DIA was up to, only to learn that all sorts of hair-brained projects were being conducted using tens of millions of dollars in taxpayer funding.

“I think anyone who looks at these titles will scratch their heads and wonder what on earth the Defense Intelligence Agency was thinking,” Aftergood reportedly told Motherboard(VICE).

Among these titles was a research endeavor entitled, “Traversable Wormholes, Stargates, and Negative Energy,” which was headed up by Eric Davis from the Austin, Texas-based EarthTech International Inc. This project was described as an effort aimed at “exploring the forefront reaches of science and engineering,” with a focus on the theories of spacetime, studies of the quantum vacuum, and the government’s search for extraterrestrial intelligence, aka UFOs and space aliens.

Another project was entitled, “Invisibility Cloaking,” and was led by German scientists Dr. Ulf Leonhardt from the University of St. Andrews in Scotland. This one focused on theoretical quantum optics, and the theoretical creation of “an invisible ‘hole’ in space, inside which objects can be hidden.”

Yet another, entitled, “Warp Drive, Dark Energy, and the Manipulation of Extra Dimensions,” focused on “researching technologies that will enable breakthroughs in interstellar travel.” Richard Obousy, the man behind the project, was reportedly credited by Gizmodo back in 2009 for developing “a scientifically accurate warship design” that could hypothetically use dark energy to propel itself through space.

“The list of research papers tells us something more than previous reporting did about this odd program,” Aftergood added in an email to Motherboard. “Now we have a better idea of exactly what the Defense Intelligence Agency was up to, and what it produced.”

For more news about space, be sure to check out Space.news.

As far as the American public was concerned, such projects didn’t exist. But now that the media has grabbed hold of them, thanks to Aftergood’s FOIA request, we now know a bit more about what was going on, and how much it was costing taxpayers.

Then-Senate majority leader, Democrat and Big Pharma hack Harry Reid, it turns out, had secretly allotted $22 million in taxpayer funding – without taxpayers’ consent, it’s important to note – for the program, though it remains unclear how the individual projects within the program were selected.

“These are the kinds of topics you pursue when you have more money than you know what to do with,” points out Aftergood about this gross abuse of the public coffers.

Not surprising is the fact that most of this $22 million budget went to Reid’s buddy, a UFO hunter by the name of Robert Bigelow of the Nevada-based Bigelow Aerospace company. Bigelow, as you might recall, was the protagonist in the documentary Hunt for the Skinwalker, which told of the billionaire entrepreneur’s extraterrestrial Skinwalker Ranch.

“I loved science fiction when I was younger,” Aftergood says. “Today, I love good government. So I was not especially amused,” he added, jokingly.

Screenshots of the now-declassified documents containing a complete list of all of Harry Reid’s pet UFO and space projects are available at this link.