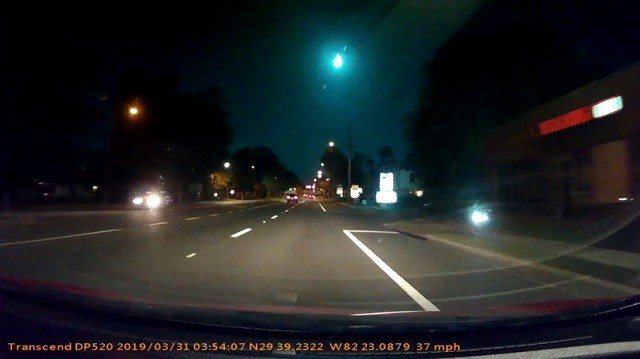 Seen recently by those living in the Gainesville, Florida area were strange objects falling from the sky. One man happened to have his dash-cam recording and captured one falling down. The orb-like object appears to have a bluish glowing hue around it, as it appears to drop fast descending to the ground.

People are perplexed about it and wonder what exactly this thing was. Speculations run wild including everything from asteroids to alien pods dropping down for some kind of invasion. Some think a secret war is happening that the public hasn’t been informed about yet.

Maybe this is part of debris from a larger sized UFO spacecraft of some kind. Anything it seems isn’t off the table about this yet. Of course there are those who think this is nothing more than digital manipulation of some kind as well.

From what is understood, the dash-cam recorded this glowing orb falling from the sky somewhere near the Gainesville area. People allegedly could see this from as far away as South Carolina.

There have been a number of reports on news stations and online about it. The estimation is all of this began to happen sometime between 10:00 pm until 4:00 am. It seems something is happening and for those who are involved in covering it up, they are having a difficult time trying to hide evidence such as this. Whatever it was, it was massive considering how big it appears from so far away. This glowing blue “fireball” is something indeed.

It is unknown just how many of these UFOs were seen. Quite possibly, there were a number of them coming down. As the orb seems to drop, it appeared to slow down right at the last moment seen in the video. Just like someone pressing the brake down on the pedal inside of a car, this thing seemed to slow up right at the very last moment.

The man who captured this on his car cam, said this happened on 3/30/2019 between 11:35 pm and 11:55 pm. He was driving home on Newberry Road / University Avenue in Gainesville. The video he said doesn’t do it justice. The unidentified object actually looked more green in color than blue. His approximate location was around 4000 W Newberry Rd, Gainesville, FL 32607.

Glancing at the angle of the road during this position, it seemed to point directly toward a satellite location. He also said that the display time on the dash-cam is wrong but the GPS was accurate. Maybe someone else out there has another capture of this amazing sight in the sky.

In this article:dash-cam, objects falling from the sky