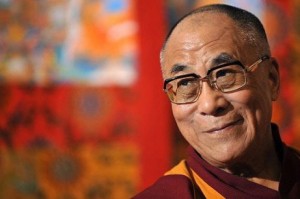 The Dalai Lama shares his interesting views on what we could do in the event of an extraterrestrial visitor coming to planet Earth. It’s always interesting to hear somebody with a voice who can reach many bring up this topic, as it is a very popular one today. I definitely resonate with what he says, that everything is interconnected, we are all one and we can see everything and everyone else as another facet of ourselves.

It’s not really a spiritual belief anymore that we are all interconnected, modern science is also catching on to this fact. Often times, science is late in catching up to knowledge that we already feel and hold within us. The interconnectedness of all things is a great example of that. Until we are ready to see everyone who lives on Earth this, we might not be ready to do it with those that reside on worlds beyond our own. Having said that, I do believe we are moving towards contact at an exponential rate and that my generation, and the ones after, have a future ‘in the stars.’

A large majority of people on Earth do not believe that we are alone in the universe and that there is in fact intelligent extraterrestrial life out there. Many also believe that extraterrestrial visitation to planet Earth has been occurring for a very long time. If one furthers their research into the subject, the evidence to support the claim that we have been visited, and are being visiting on a daily bases is abundant. Evidence ranges from official documentation from various sources like UFO researchers, governments, three letter agencies and more. Beyond this we have statements made by very high level military and political personnel. Further, we also have many people on planet Earth who claim to have had direct contact with extraterrestrials themselves.  For more articles on the UFO and extraterrestrial phenomenon, you can visit our “exopolitics” section under the alternative news tab on our home page.