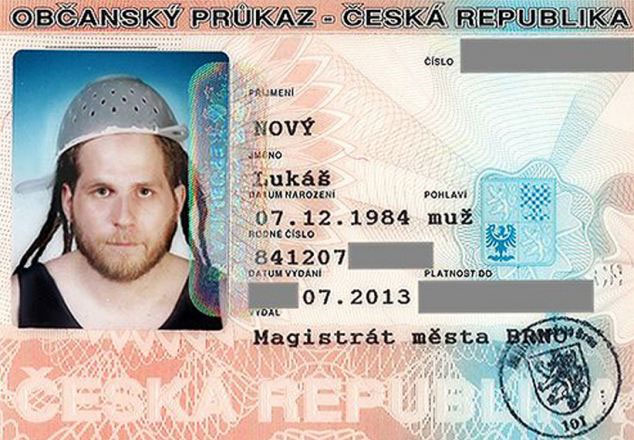 A man who wears a sieve on his head for religious reasons has been allowed to wear his bizarre headgear on his official identity card.

Prankster Lukas Novy, from Brno in the Czech Republic, claims that his Pastafarian faith means he has to wear the sieve at all times.

Officials ruled that turning down Novy’s request would be a breach of the country’s religious equality laws.

Brno City Hall spokesman Pavel Zara  explained: ‘The application complies with the laws of the Czech Republic where headgear for religious or medical reasons is permitted if it does not hide the face.’

Novy claims to be a member of the Church of the Flying Spaghetti Monster, when emerged in the USA as spoof on organised religion.

According to its tongue-in-cheek website their ‘only dogma … is the rejection of dogma’.

Members claim to believe that an invisible alien made of spaghetti and meatballs created the universe after ‘drinking heavily.’

In 2005, physics graduate Bobby Henderson, 24, from Oregon State wrote a letter about a ‘Flying Spaghetti Monster’ as a protest against the Kansas State Board of Education’s decision to allow the teaching of intelligent fesign as an alternative to evolution in  public schools.

The ‘religion’ arose as a response to pressure for American schools to teach the theory known as intelligent  design, which some Christians favour as an alternative to natural  selection and evolution. The theory argues life must have been helped to develop by an unseen power.

By  professing belief in a supernatural entity composed of pasta and  meatballs, Henderson called on ‘Pastafarianism’ to be given equal time  in science classrooms alongside Christian theory.

Word rapidly spread and the Church of the Flying Spaghetti Monster (CFSM)  now has thousands of followers, mainly on college campuses and in  Europe.

The central tenet of CFSM is that an invisible Flying Spaghetti Monster created the universe ‘after drinking heavily’.

Advertisement. Scroll to continue reading.
In this article:Czech Republic, Pastafarian