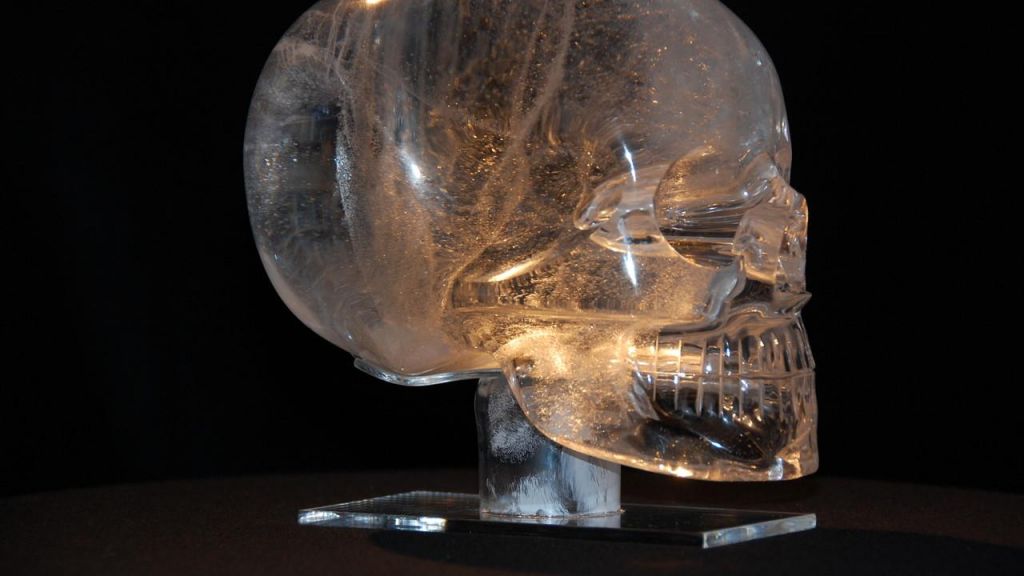 In 1927, the American archaeologist F.A. Mitchell-Hedges was excavating the Lubaantoon, the ancient Mayan Indian citadel, discovered in the jungle of British Honduras, the City of the Fallen Stones, and discovered a polished quartz skull. In places, smoky spots and small balls resembling air bubbles were visible in it, but there were no cracks or scratches.

Weighing almost 5 kg, and being the perfect replica of a woman’s skull, it has a finality that would not be possible without the use of more or less modern ways, ways that the Mayan culture possessed and which we do not know about. The skull is perfectly ground. It’s jaw is a hinged part separate from the rest of the skull. It has attracted (and will probably continue to do so to a lesser extent) specialists from various disciplines over time. It is also worth mentioning that esoteric attributes of supernatural abilities, such as telekinesis, emitting an unusual aroma, discoloration is attributed to it. The existence of all these properties is difficult to prove.

The skull was subjected to various research. One of the inexplicable things is that it is made of quartz glass, and therefore having a Mohs hardness of 7 (scale of minerals from 0 to 10), the skull was able to be cut without such hard cutting materials as rubies and diamonds. Skull studies conducted in the 1970s by the American company Hewlett-Packard, have determined that in order to achieve such perfection, it would have to be sanded for 300 years.

An examination of Hewlett-Packard showed that the skull was made long before the appearance of the first civilizations in this part of America. Rhinestone of such high quality is not found at all in these places. But the most striking thing was that the skull, whose weight is 5.13 kilograms and the dimensions are 125.4 x 203.4 millimeters, is made of a solid crystal.

Here is what engineer L. Barre, one of the best experts at Hewlett-Packard, said in this regard:

“We studied the skull on three optical axes and found that it consisted of three to four spines … Analyzing the splices, we found that the skull was cut from one piece of crystal together with the lower jaw. According to the Mohs scale, rhinestone has a high hardness equal to seven (second only to topaz, corundum and diamond), and it is impossible to cut it with anything except diamond. But the ancients somehow managed to process it. And not only the skull itself – they cut from the same piece the lower jaw and the hinges on which it is suspended. With such a hardness of the material it is more than mysterious, and this is why: in crystals, if they consist of more than one splicing, there are internal stresses. When you press the crystal with the head of a cutter, because of the voltage, the crystal can split into pieces, so it cannot be cut – it will simply split. But someone made this skull from one piece of crystal so carefully that it did not touch it at all during the cutting process. We also found a kind of prism carved in the back of the skull at its base so that any ray of light entering the eye sockets is reflected in them. Look in his eye sockets and you can see the whole room in them.”

Engineers and technicians also found something interesting. The skull has striking optical properties. In the cavity of the skull and at the bottom of the eye depressions are placed masterfully made lenses and prisms that allow you to transmit images of objects. Facial arcuate faces act as light tubes, like modern optical fibers. They transmit light from the base of the skull to the eye depressions, where they end with two miniature lenses. The two projections at the base of the skull are shaped like small pyramids.

When the light beam is directed into the cavity of the skull, the eye depressions begin to shine brightly. If you direct a beam of light to the center of the nasal cavity, the skull begins to glow completely and a bright halo appears around it.

Studies have shown that the skull was machined without taking into account the molecular symmetry of the crystal and the extreme fragility of the material. This cannot be done without crushing the crystal, even with a laser. In order to prevent such a crystal from crumbling during processing, precise analytical methods were required: the cuts should be strictly oriented with respect to the crystal growth axes. Scientists came to the conclusion that not one of the known modern technologies is capable of creating an exact copy of a human skull from a single piece of quartz. They even refused half a million dollars, which were offered to the one who made a copy of the crystal skull.

Some people believe that the crystal skull possesses mystical properties. It has different effects on those who approach it: someone experiences discomfort and incomprehensible fears, others even faint and lose their memory for some time, while someone, on the contrary, calms down and falls into a blissful state.

Historians and ethnographers interested in the Lubaantun find have begun to look for information that could shed any light on this phenomenon. Something was discovered in ancient Native American traditions. They said that there were thirteen crystal skulls of the “Goddess of Death” and that they were stored separately from each other under the watchful supervision of the priests and the strict guard of special warriors.

Thirteen clergymen in different places at the same time had to peer at each other’s “own” skull. And they could see what was happening at that time anywhere on the Earth, and also see the past and future, right up to the end of the world. Legends said that initiates could see in the turtles the day of the return of the gods, including Kukulkan himself – the white-skinned bearded “god of the planet Venus”.

When historians became interested in this mysterious item from the Mitchell-Hedges excavation, it turned out that it was not the first such find – the archives found a reference to all the forgotten and unprecedented draw attention to the fact that in the late 80’s, a crystal skull was found in Mexico from soldiers of the Mexican emperor Maximilian, still exhibited at the British Museum. It differs significantly from the one from Lubaantoon – despite the similarity in size, it is less transparent, less detailed, and the lower jaw is fused with the skull. Nevertheless, the very existence of such mysterious skulls caused a sensation.

There are 13 such skulls, according to a legend spread in Mexico and Central America. According to local tradition, death (symbolized by numerous skulls, also represented on reliefs of the Mayan pyramids) marks the beginning of a new life of knowledge. We live in the fifth cycle. In each cycle, the human race lived, which disappeared after its end. We live under the fifth sun. Under the first, giants lived, they were destroyed by water. The kite destroyed people living under the second sun. It turned humans into apes, and only two were saved – a man and a woman. Inhabitants of the third world ate some fruits. It was destroyed by the fire of heaven. Under the fourth sun, people were starving.

According to the Mayan predictions, our world will perish from the earth’s oscillation and shake (the Earth’s magnetic poles may shift). However, in any doomsday story, there is hope for salvation. For the Mayan Indians, 13 crystal skulls became such a hope. When gathered together, the 2012 end day scenario would be prevented. The Mayan legend even states that the skulls were created when the 12 planets were inhabited. Their inhabitants conveyed the skulls of the Atlantean civilization, and they in turn gave them to the Mayan Indians.

In the course of the searches, another intriguing detail suddenly emerged. It turned out that ancient crystal skulls are of interest not only to historians, but also to some secret societies. So, in Honduras, the so-called “Pink Quartz” – a masterpiece that is not inferior to Mitchell-Hedges in its perfection – disappeared without a trace. The investigation found that, before its disappearance, priests of some secret cult had been repeatedly tried to steal it.

In addition, the crystal skulls were also of interest to serious government. So, in 1943 in Brazil, after an attempt to rob a local museum, agents of the German society “Anenerbe” were detained. At the interrogations, they showed that they had been brought to South America by the secret defence ship “Passim” – with the special task of finding and “seizing” the crystal skulls of the “Goddess of Death”. Several groups were abandoned for the same purpose. Although many were also arrested, it is possible that someone has succeeded.

Why were the crystal skulls needed by the most secret institutions of Hitler’s Germany?

Those who were interested in the secret history of the Third Reich, know today some things about its mystical roots and about a particularly secret purpose – to seize power in the invisible, metaphysical world. They also know about the main research structure of the SS – the elitist Order of Anenerbe (Heritage of Ancestors), which had over fifty research institutes under its control. The “mysterious cardinal” of this mystical order is a descendant of an ancient lineage, the bearer of the “knowledge of the devil,” Gruppenführer SS Karl Maria Willigut. It was at the initiative of Weister (alias Willigut) that the Emissaries of Anenerbe scoured around the world in search of ancient knowledge, archives and magical details of secret societies. The quest for the crystal skull was included.

They were especially interested in the magical methods of the priests of Atlantis. The Nazis hoped that this knowledge of the “progenitor of the Aryan race” would allow them not only to create a “superhuman”, but also to subjugate the rest, “subhumans.”, through magic. In search of the most ancient magical knowledge, Anenerbe organized expeditions to the farthest corners of the globe: Tibet, Central and South America, Antarctica. The two last continents were given special attention, since it was there that it was expected to find traces of the ancient Atlantes and their knowledge.

The Skull and Bones Order, whose members are representatives of the American elite

The first crystal skull was purchased in 1886 by the Smithsonian Institution. One of the skulls found is stored in Japan and is made of solid amethyst.  The skull “Mah” found in Guatemala is made of pure quartz.
The Crystal Skull stored in the Museum of Man and Paris, is rather rough and depicts the Aztec god of death. Finding him in Mexico City in 1885, Boban, who found it in Mexico City in 1885, exhibited it along with a collection of real human skulls in his store, which he called ‘Museo Cientifico’. The fashion for stereoscopic photographs of skulls, skeletons, which were called Devils, was so high that the artists even made fun of it in caricatures.

In this article:Anenerbe, Crystal Skulls 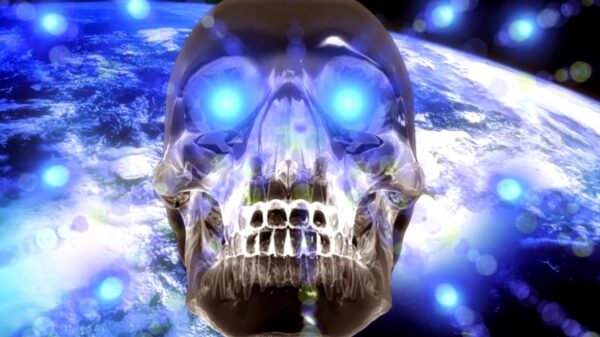 Ufologist said that the found crystal skull refers to aliens

Taiwanese ufologist Scott Waring reflected on his Instagram page on the origin of one of the crystal skulls, demonstrating a corresponding video. The researcher said... 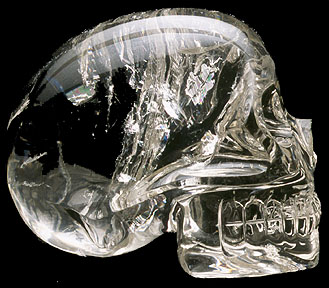